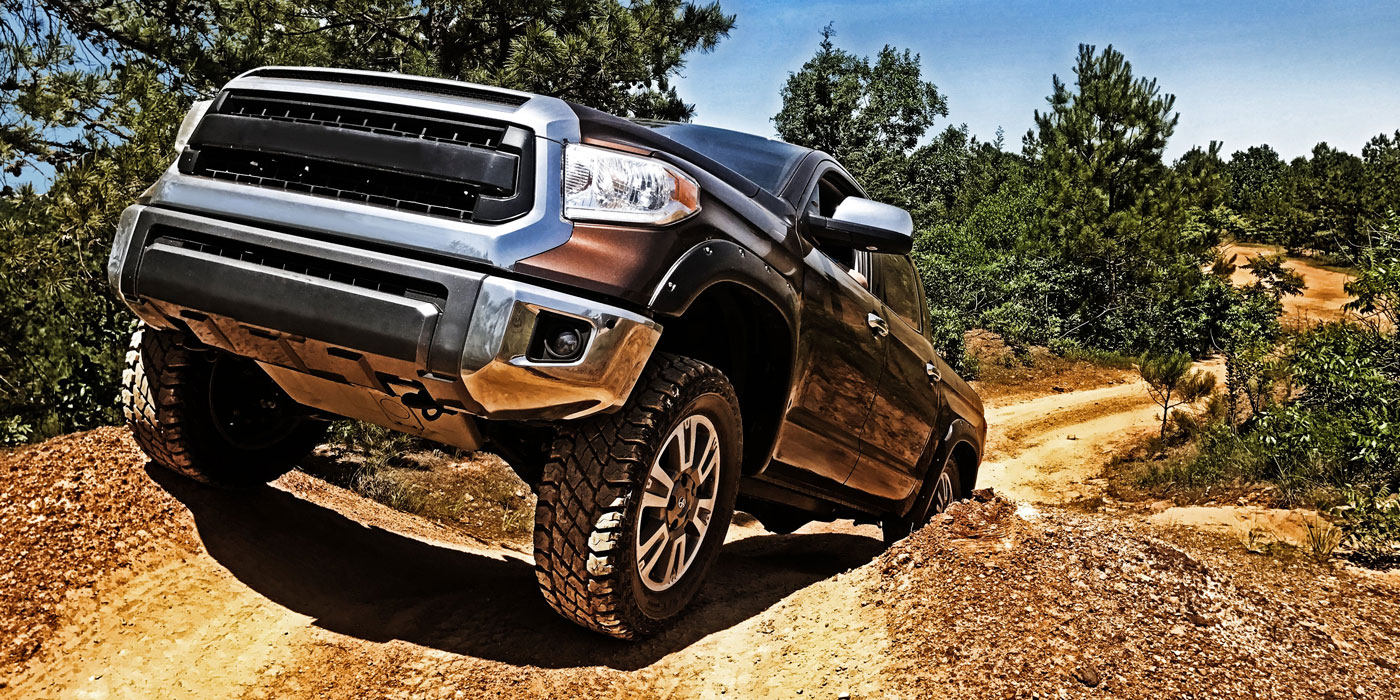 Nestled between A/T and M/T tires, the R/T tire segment continues to grow.

When a customer walks into Tate Bros Off-Road, “nine times out of 10, they want a lift kit,” says Logan Tate, the Millington, Tennessee, tire dealer with big plans to grow his presence in the greater Memphis area.

“We create custom culture,” Tate says, repeating the shop’s motto. While lift kits are part of that, a person’s tire choice is, too, so part of Tate’s job is to weigh what his customers want with what they really need to achieve a comfortable ride. A segment in his tire inventory that has helped bridge that gap is the rough- or rugged-terrain category.

“I like to consider an R/T tire the best of both worlds,” he says, remarking on its ability to combine the on-road manners of an A/T with the aggressive aesthetics and off-road performance of an M/T. “It’s got a cool, tough sidewall for the look of the vehicle but doesn’t wear crazy.”

Most manufacturers agree that a tire between the M/T and A/T segments is needed to deliver on the performance and aesthetics customers want. How manufacturers have responded to this need in the market, though, has varied.

What Exactly is an R/T Tire?

R/T tire performance will differ by manufacturer, so let’s start with the similarities: Thick, deep sidewall edges with rugged designs match the terrain these tires can conquer. Chunky tread blocks with a high void ratio expel mud, rocks and other debris as if the rough road ahead were moving out of the way for the mighty R/T. This “hybrid” is also designed with deeper tread depths characteristic of an off-road tire design—typically ranging from 16 to 19/32nds, sliding more to the M/T side than the A/T side with 12 to 16/32nds of tread, says Aaron Conrow, product manager for Cooper Tire & Rubber Co.

But don’t be fooled by its aggressive looks—this tire has manners. Its closed-off gaps between inner tread blocks help to lessen noise, borrowing ride comfort from its cousin, the A/T, while its tread design screams “off-road ready”

“I consider these tires for my weekend warriors,” Tate says. “They’re for the person who drives their vehicle back and forth to work daily but hunts, fishes and goes to their local motocross track on the weekends.”

Since the R/T segment also represents consumers looking to lift their trucks and plus-size their wheels, the aesthetic of the tread and sidewall are as important as the balanced performance, says Brandon Stotsenburg, vice president of automotive at Kenda Tire USA. This has necessitated more pattern design tuning, rubber compound development and tire testing to confirm that R/T tires perform well over a wider range of performance requirements.

Those requirements are coming from dealers and consumers, who have asked manufacturers for a tire “with the appearance of a modern M/T, the traction of an A/T and the on-road experience of an H/T,” says Michael Mathis, president of Atturo Tire.

“In some instances, we see consumers transitioning from the R/T to our M/T as they continue to modify their vehicles for more extreme off-roading use,” Bergeson explains. “Conversely, we see other customers moving from the M/T over to the R/T and loving it for its on-road manners.”

An R/T customer can take many forms: It could be the person described above—that weekend warrior who needs strong off-road performance while spending a majority of time on-road—or, it could be the customer who’s eyeing an M/T tire on the rack, while admitting that they’ll never really use it much off-road.

To determine the type of customer you have at the counter, ask them a few questions, Tate says. Do they prefer a tire with style or are they looking for longevity out of their investment? What type of mileage do they put on their tires in a normal week? Are they looking to customize their vehicle?

“When someone wants a 35-in. tire, that’s when we go for a no-rub, no-scrub upgrade,” says Tate, explaining that the shop installs suspension lift kits on more than 50 vehicles per week.

Stotsenburg adds that dealers should also understand their customers’ priorities around noise, ride and handling, as well as how their vehicle characteristics are affected by any modifications.

“Be knowledgeable about the wheel and tire options, pricing and performance gaps so that [you] can match the best tire for the customer’s needs,” he says. “Always ask for pictures and reviews, as satisfied customers will enhance a strong retailer reputation to attract more sales.”

Most importantly, dealers who have an R/T tire in their POS system can tout its wide appeal.

“For some drivers, a mud-terrain is too loud and has too harsh of a ride,” Atturo Tire’s Mathis says. “The truck owner with an OE-highway tire may find the appearance and the traction to be underwhelming. An innovative hybrid tire like the Trail Blade X/T solves all these challenges, creating a winning application for all types of pickups, jeeps, SUVs and even crossover vehicles.”

In true hybrid fashion, sizing for this segment also overlaps with A/T and M/T tires. Many manufacturers also include LT-metric, flotation and P-metric sizes in their R/T product lineup to fit SUVs and light-duty pickups, since many R/T tires may not necessarily carry extra heavy loads, Cooper’s Conrow says.

Know that if you’re interested in getting into the R/T segment, manufacturers themselves are also navigating this category to best fit customers’ needs.

“Initially, we launched the Open Country R/T with only LT-metric and flotation sizes,” Toyo’s Bergeson says. “The market voice quickly answered back, asking for a larger variety of sizes in our hybrid tire, as it quickly earned respect and popularity among enthusiasts. We have learned over the years, especially when spending time on the job sites, and off-roading with our customers, that there are many factors that drive a purchase decision.”

When the Going Gets Tough

Although many consumers have fallen on difficult economic times recently, expect the R/T segment to grow in the long term. Manufacturers continue to develop solutions nestled between the A/T and M/T segment so that your customers will have the tires they need when the going gets tough.

“There may be some slowdown related to less variable income, but the trend will continue to grow as long as the R/T products offered match the consumers’ need for performance,” says Kenda’s Stotsenburg, adding that many products are on the market that target the demand for aesthetics but don’t have the engineering to provide consistent performance. “Kenda encourages our channel partners to educate consumers to assure that they get expected performance in addition to good looks.”

Cooper’s Conrow says the R/T market has increasingly targeted SUV and light-duty pickup owners by offering a broader array of P-metric sizes. At the same time, he says manufacturers are offering more Load Range F flotation sizes to keep up with this growing trend in the M/T market. Stotsenburg adds that an increased emphasis on aesthetics and winter performance will also evolve as the R/T segment gains traction.

Overall, manufacturers remain positive about the R/T segment with its ability to offer the best of both worlds—performance characteristics from the A/T and M/T categories—to customers.

“There is plenty of room in between these two categories,” says Toyo’s Bergeson. “We are optimistic about this ‘hybrid’ tire segment.”

COUNTERPOINT: Is There a Need for an R/T Tire?

While many manufacturers have released tires that fill the gap between the A/T and M/T segments, some have elected to not yet play in this segment.

“It’s not really a segment we here at BFGoodrich are interested in,” says Brandon Sturgis, global product manager at BFGoodrich Tires. “What I hear about R/T tires is that they’re a hybrid between all-terrain and mud terrain…In terms of aesthetics, they are, but with off-road performance we don’t see that.”

As the creator of the first radial all-terrain tire, BFGoodrich sticks to its heritage, Sturgis says. Its off-road tire offerings focus on “strong sidewalls” with a form that follows function aesthetic and performance. The company also offers its A/T and M/T tires in LT-metric and flotation sizes—not P-metric tire sizes that have joined some R/T lines.

“We follow the LT-metric standard since those are the tires that have higher load capacity, higher operating pressures and tough tire designs,” Sturgis explains.

However, Sturgis acknowledges that “there are other positions on either side of the [BFGoodrich All-Terrain] KO2. There is definitely the consumer who cares about aesthetics who doesn’t need off-road performance.”

While BFGoodrich may stick to its traditional A/T and M/T offerings for now, expect to see how it and other manufacturers respond to this need in the market in the future.