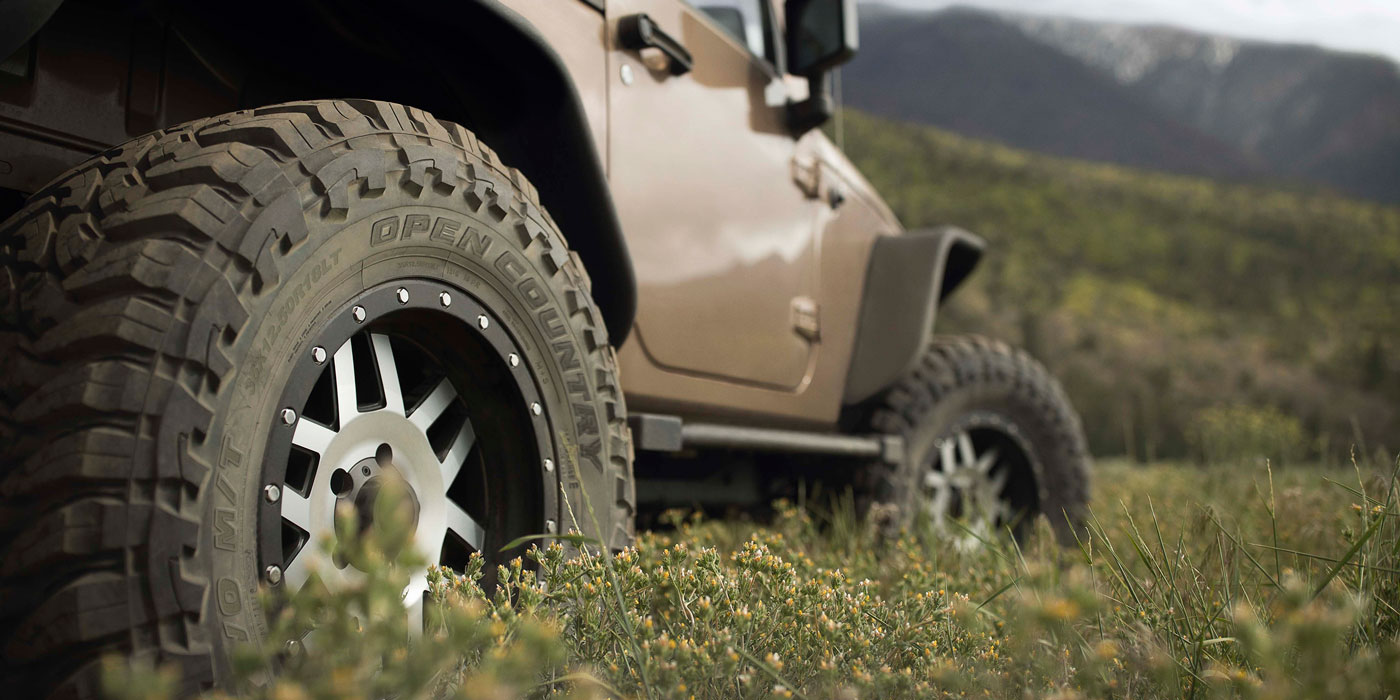 Leading tire manufacturers have provided us with the latest and greatest tire technology, compounding and tread designs.

From the dawn of the age of diesel-powered mobility, Americans have embraced and explored all 3.5 million square miles of the U.S. from behind the wheel of big and powerful vehicles. In this way, the vehicles that we drive tend to define us.

For many Americans, the car, truck or SUV in their garage or driveway says something about them. What we choose to drive is part of our identity. Are you the type of person who would drive a 5,600-pound Chevy Tahoe or not? This might look like a yes or no question; but, in actuality, there’s a spectrum of tastes and preferences behind it.

And that’s true for tire manufacturers catering to vehicles in this market.
Leading tire manufacturers have rushed to meet us where we identify, with the latest and greatest tire technology, compounding and tread designs. From the rugged versatility of genuine off-road-capable tires—that place more emphasis on function over form—to those that emphasize curb appeal and vanity over functional capability, manufacturers long ago saw the trend toward truck and SUV ownership in America and have embraced the category with open arms and full R&D budgets.

Between 1980 and 2005, light truck ownership in America saw a steady increase before a steep nosedive that bottomed around 2009. But between 2009 and 2020—and in some correlation with generally lower fuel prices—the line looks more like a rocket upward as Americans have fully embraced SUV and truck ownership.

Whether it’s a mall crawler Jeep Wrangler that simply looks the part or a purpose-built and genuinely capable lifted truck on 38-in. high-void mud terrain tires, the M/T tire category in particular spans the spectrum in terms of form vs. function.

Sky high consumer expectations for tires is obviously nothing new and this is especially true of the A/T and M/T tire categories.

“The A/T and M/T categories are unique in design as drivers require dependable off-road performance in challenging conditions without compromising comfort and safety on the highway,” says Will Robbins, senior product manager for Bridgestone Americas.

Although they are certainly not alone, Bridgestone has chosen to balance form with function by flexing its R&D prowess. Kumho Tire takes a similar approach.

“We strive to keep our A/T and M/T products very balanced when it comes to performance features,” says Chris Han, Kumho marketing manager. For instance, we will not develop a product for the market that will be specific to off-road performance only, but will have a balance of high performance in that area along with stress points on key highway features such as lower noise and more comfort that still incorporates an aggressive and robust design.”

For Yokohama Tire Corp., the company is crystal clear on its product priorities.

“With every product, the details are different, but for these types of [M/T] products, the general goal is: 1. Durability; 2. Traction; 3. Mileage; and 4. Ride,” says Bob Abram, Yokohama’s senior manager of product planning. “We believe that if a tire holds up and does the job off-road and gets you the mileage and manners on-road, we have produced a valuable tire.”

For many consumers, the aggressive sidewall and tread pattern styling are simply part of the equation, but the tire must actually perform at peak levels off-road and in mud conditions.

You don’t need to be an Alabama football fan to appreciate the words of the university’s head coach, Nick Saban: “When you get to the top of the mountain, you become the mountain.” That is true for A/T and M/T tire manufacturers in the U.S. tire industry. Because the latest trends offer an opportunity for them to stake their claim at the top of the mountain, they’ve had a chance to flex their innovation muscle while building brand status.
Several technological innovations that have risen in the A/T and M/T categories include three-ply sidewalls for additional stability and off-road durability; higher load-carrying capacities thanks to the expansion of more 12-ply sizes; and increasing sizes of outer diameters. As Americans continue to choose large and powerful vehicles, expect these trends to have staying power.

“The U.S. is the number one market for SUVs and trucks. For this reason, we make this segment a high priority for sustainable growth and increased brand reputation,” says Megan Wentz, Nexen Tire America marketing manager.

Of course, Nexen and its counterparts have their work cut out for them. The A/T and M/T product categories offer prime real estate from which to build and grow brand reputation among a fast-growing product category segment. For Yokohama Tire, which was initially focused on the UHP segment, its activity in off-road motorsports in the ‘80s and ‘90s pushed the company to compete in the off-road segments, but it knew it had to come out of the gate with strong technology to build its reputation in the segment, Yokohama’s Abram said. Tread compounds that allow for “the right balance of grip, mileage and cut and chip resistance,” as well as tread designs created for traction while reducing road noise, were just a few factors that helped them stake their claim.

Manufacturers agree that showcasing their advanced technology and performance capabilities in these segments also allows them to create aggressive aesthetics for which their brands become known.

“This segment has vocal enthusiasts who count on products to perform in challenging conditions to facilitate their passions,” says Bridgestone’s Robbins. “When those products perform as promised, they build strong advocates.”

Megatrend #3: The Rise of the Crossover

We all know that crossovers, or CUVs, are the fastest-growing vehicle segment these days. Part of the reason is that they’re more capable and versatile than ever before.

As much as we’ve seen product characteristics typical of the M/T category starting to show up in all-terrain tires, along with the rise of the hybrid R/T tire category, consumers are increasingly choosing CUVs that display some off-road prowess with all of the benefits of on-road manners. And, again, tire manufacturers have responded to this trend and met consumers where they are.

For example, Falken Tires introduced the Wildpeak A/T Trail, what it calls “the first crossover-specific all-terrain tire on the market,” in late 2019.
“North America’s recent growth in both outdoor recreation and crossover sales led us to believe there would be a need for a crossover-specific all-terrain,” said Drew Howlett, Falken Tires’ product manager. “We also believed that the ideal product didn’t yet exist. The issue was, a typical beefy all-terrain was designed for F-150s and Silverados, not RAV4s and Crosstreks. These vehicles need tires that were developed with a crossover’s unibody platform in mind, which is exactly what we did with the A/T Trail. Simply put, the A/T Trail was designed to give crossover owners an easy and effective way of increasing their vehicles’ off-road capability without compromising its on-road performance.”

Similarly, Yokohama has introduced 22 sizes of its popular Geolandar A/T G015 for crossover and SUV owners who want off-road performance.

With crossovers “selling like hotcakes,” Howlett says expect to see more options in the CUV all-terrain segment. “This will likely happen both with size expansions of current products, as well as with the introduction of all-new products.”

Because of the versatility inherent to large trucks and SUVs, a newer, niche tire category has risen to accommodate consumers’ needs, according to SD Wheel, an A/T and M/T tire and wheel outfitter.

“There’s been a major shift away from some very solid-performing [M/T] treads into R/T tires,” says Steve Hamilton, the company’s founder and COO. “We personally like R/T tires because they still look aggressive like an M/T, but perform more like an A/T.”

According to Falken’s Howlett, the rise of a “hybrid” segment, as well as “all-weather” products, comes from the American consumer’s desire to avoid compromise, along with their affinity for convenience. “It appears that certain all-terrains don’t conquer all terrains like some consumers think they should, which has led to the introduction of a new off-road category,” he says.

One manufacturer that has fully embraced the R/T hybrid product category is Kenda Tire USA. Brandon Stotsenburg, the company’s vice president of automotive, said R/T tires are “capable of exceptional M/T off-road performance while providing civilized on-road noise and ride similar to an A/T tire.” To be sure it performs over a wider range of requirements, manufacturers have developed more aggressive testing and product tuning to confirm that these tires live up to their promises.

As the summer season continues, the open roads call to us, beckoning us to explore this country’s 3.5 million square miles. With many Americans still unwilling to board a plane, road trips are set to be the activity of the summer. Whether you do it from behind the wheel of a Tesla Model X or a Dodge Ram 3500, tire manufacturers are working to ensure that the rubber connecting you to the road is more capable, performance-tested and versatile than ever before.