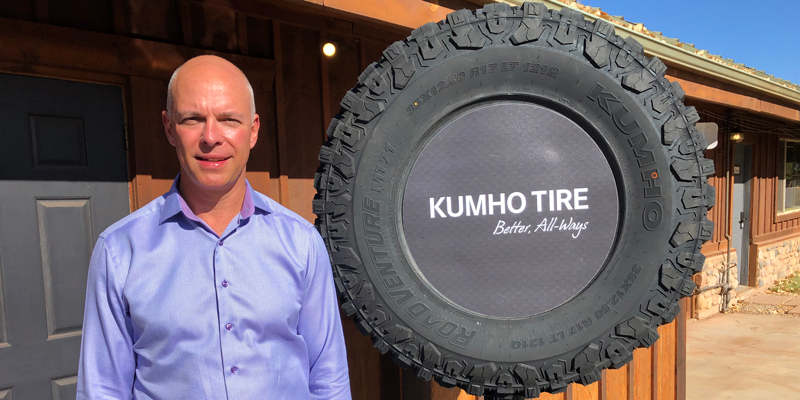 Dozens of Kumho Tire dealers, wholesalers and distributors were invited to Moab, Utah, to receive business updates from the South Korean tiremaker during the company’s annual dealer meeting.

Amid walls of red rocks hundreds of feet high and a peaceful Colorado River flowing behind them, about three dozen Kumho Tire USA dealers, wholesalers and distributors were invited to the Sorrel River Ranch Resort and Spa near Moab, Utah, to hear business updates during the company’s annual dealer meeting held Nov. 13-15. In addition, guests were introduced to Kumho’s new Road Venture MT71 tire – which will be available Jan. 1, 2020 – as part of the company’s first-ever tire launch event.

Click here to read about the Road Venture MT71.

“We’re actually taking two products and putting them into one, so it doesn’t complicate it for the consumer,” Denlein told the room. “And, most importantly for you, this streamlines your inventory and you can focus on one product line.”

Denlein also updated dealers on Kumho’s new unilateral pricing (UP) policy, which was recently launched Oct. 1. The policy asks resellers to simply agree or disagree with the pricing structure set by the company and gives Kumho a way to stop doing business with a reseller if the need arises. The policy, now in its first phase, currently only includes Ecsta PA51, Road Venture AT51 and Crugen HT51 and HP71 products, but this will expand to include the Road Venture MT71 in January 2020. In the second phase that will be implemented in April 2020, the Solus TA11, TA31 and TA71, as well as the Ecsta PS31 and PS91 will be brought in. All Kumho products will be on the UP policy by July 2020.

“Ultimately, we want the dealer to have better margins. So, this is just kind of a way to kind of bring everything together and create more of a unified approach to the product,” Denlein said. “This is more of a uniform pricing structure for the dealers.”

Denlein also gave the group a look into Kumho’s OE partnerships on a global scale. In 2018, the company produced 16.2 million tires for OE fitments in 212 sizes for 110 different vehicles, he said. In the U.S., Kumho has a total of 61 OE model partnerships, with recent partnerships formed with BMW, Volkswagen and Audi.

He also shared Kumho currently has a revenue of $2.3 billion, operates in 180 countries and employs over 10,000 people. According to a 2019 original equipment tire customer satisfaction study in the passenger car category completed by JD Power, Kumho ranks eighth among brands. North America makes up 29% of the company’s global sales, followed by South Korea at 20%.

Denlein said Kumho’s aided awareness – the percentage of respondents aware of Kumho’s products, brand, or advertising when asked – is currently at 42% according to the company’s research, up from 22.66% in 2013. He attributes much of this growth to the company’s non-traditional advertising strategy, such as relying heavily on social media, as well as Kumho’s NBA marketing partnership, which the company will continue into 2020 and beyond. Kumho also plans to partner with the Team USA Olympic basketball team in 2020.

The company projects it will achieve a 46% aided awareness value by 2022, and has had the most success in the under-40-years-old category.

“We’re moving more into a digital space. We’re picking up chunks of awareness with the younger person, which pretty much shows you that it’s working,” Denlein said. “There’s a lot of trust around social media now, and you have an opportunity to gain new customers, and then we and you can target and retarget consumers.

“The other thing is that it’s just really cost-effective. And then, everybody trusts online reviews. I really, especially from retail, I always push our retailers to concentrate on their online reviews, because that’s really what consumers look for,” he continued.

In regard to sports marketing, Denlein said Kumho Tire USA recently re-signed a long-term contract with the NBA, and plans to increase marketing with the NBA’s G-League (comparable to the minor leagues in baseball) going forward.

This NBA partnership marries well with Kumho’s social media-focused marketing strategy, as Denlein said the NBA has the largest and most engaged social media community of all sports leagues, at 1.5 billion followers. To help capitalize on this following, Kumho has claimed sole rights to the NBA’s “Handles” campaign, which features top plays for the month.

“This Handles campaign is actually the most successful social media campaign that the NBA has ever done, and we’ve claimed sole rights to it,” he said.

One of Kumho’s more recent sports partnerships is with Collete Davis, a 24-year-old professional racecar driver, stunt driver, car-builder, vlogger, entrepreneur and national TV host. Collete was in attendance for both the dealer meeting and the tire launch ride-and-drive.

“She does everything. Stunt driver, car builder, she puts her car videos on YouTube and has a really unbelievable following when it comes to women, which, you know, in our industry we’re all trying to touch that type of consumer, and it’s difficult, but she has a huge following,” Denlein said. “She’s extremely dynamic, and she fits in with what we do with social media because she will post things, and we’ve had such an uplift on our social media because of her.”