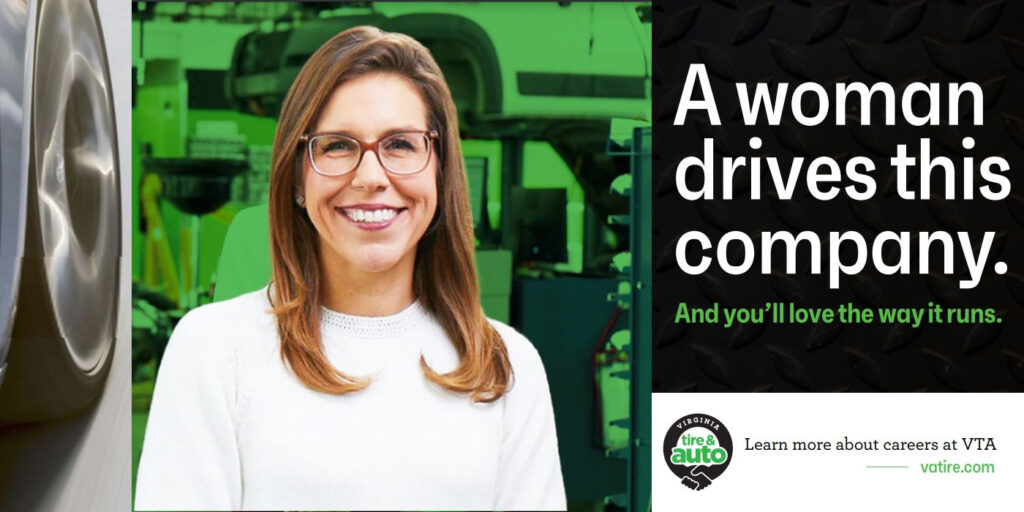 Like many tire dealers, Julie Holmes has grappled with the shortage of qualified technicians in the tire industry, but most recently, she’s also been confronted with a general labor shortage that many businesses are dealing with today. Virginia Tire & Auto employs 300 people across its 18 stores, and offers benefits like health insurance and 401K – but in this competitive labor market, that hasn’t been enough to fill openings for the McLean, Virginia-based tire dealer.

“I believe that to truly be an employer of choice you need to have gender diversity and equality,” says Holmes, who owns and is co-CEO of the 46-year-old dealership, a 2011 Tire Review Top Shop Winner. “We want to hire more women because it is something that we believe to the core—and it is authentic and genuine since our leadership is composed of many women. Our leadership is modeling what we hope the whole company will reflect in the future.”

In January this year, the business hosted a major hiring open house with its efforts aimed at women. Positions were open to all, and the company made on-the-spot job offers with signing bonuses up to $4,500. Technicians who accepted an offer were given a $100 Snap-on Tools gift card. “Just given the tight labor market, we felt it was necessary to make ourselves more attractive in the marketplace,” Holmes says.

Holmes says she sees a multitude of benefits of gender diversity at Virginia Tire & Auto. “Our leadership team has gender equality and the way we think about things, the decisions we reach—we are benefitted by, and get there because we represent different viewpoints that men and women bring to the table. And I want those different viewpoints represented at all levels of our organization,” she says.

Different viewpoints, Holmes says, will help the company to be an employer to all. According to research from career navigator Zippia, 4.9% of all auto mechanics are women, while 91.7% are men. Holmes cites a stat from ASE that 2% of certified professionals in the auto repair industry in 2018 were female.

In contrast, 76% of today’s job seekers said a diverse workforce was an important factor when evaluating job opportunities and companies, according to a 2020 Glassdoor survey.

An emphasis on diversity in the hiring process at Virginia Tire has worked. In 2021, Holmes says the company hired 37 women versus five in 2020. This past year, the company also promoted one woman to store manager. Holmes says the business’s efforts are “already forward progress and a dramatic increase in women hires,” as its employees have been almost entirely male.

Holmes feels that recruiting efforts aimed at women will not only help the business relate to its customer base but also incorporate a different set of skills into Virginia Tire’s workforce.

“I do want to say that we have amazing, highly-skilled men working for us. I don’t want them to think in any way that we don’t appreciate them or their hard work,” she says. “ Based on my experiences, I do believe that women are uniquely able to address the demands of the auto repair industry in an environment that has higher consumer expectations than ever before.”

Holmes said in the garage, or “back of house,” women can also be more utilized since technology has removed certain physical barriers.

“For example, there are now automatic tire changers that make the most physical part of the job rolling the tire to the machine. Cars really are computers on wheels now,” she says. “It’s less about the physically demanding ‘turning wrenches’ part and more about using computers to solve complex vehicle problems. Women are as equally suited as men to solve these problems.”

Holmes continued: “We also want to be able to relate to our female customer base. Some of them don’t feel comfortable in automotive repair shops. We want to create a friendly, inclusive environment for everyone.”

Holmes, who left her law career to help take over her family’s tire dealership, says motherhood was one of the experiences that inspired her to kick off Virginia Tire’s female hiring campaign. She and her husband, Mike Holmes, who is co-CEO of the business with his wife, are parents to five kids under the age of 14. Holmes says in raising her kids, she saw firsthand how different genders solve problems differently.

“Very generally speaking, boys and girls are interested in different activities, their level of physicality is different, and they communicate differently. But they are capable of doing the same work,” she says. “I hope in future years that, as my girls grow up, the industry will change, and young women will realize that there are options within any industry they choose.

To read more from Julie Holmes, check out her thought leadership piece on “Raising the Next CEO” here.

The Goodyear Tire & Rubber Company announced cost savings actions in response to a challenging industry environment and cost pressure driven by inflation. Planned rationalization and workforce reorganization would result in an approximately 5% reduction in salaried staff globally or about 500 positions, the company said.

“Our fourth quarter results fell short of our expectations given a significantly weaker industry backdrop, particularly in Europe,” said Richard J. Kramer, chairman, chief executive officer and president. “While our businesses have performed at a high level through the volatility of the past several years, the uncertain near-term macroeconomic outlook and continuing impacts of inflation make these difficult actions necessary to position our business for future success.”