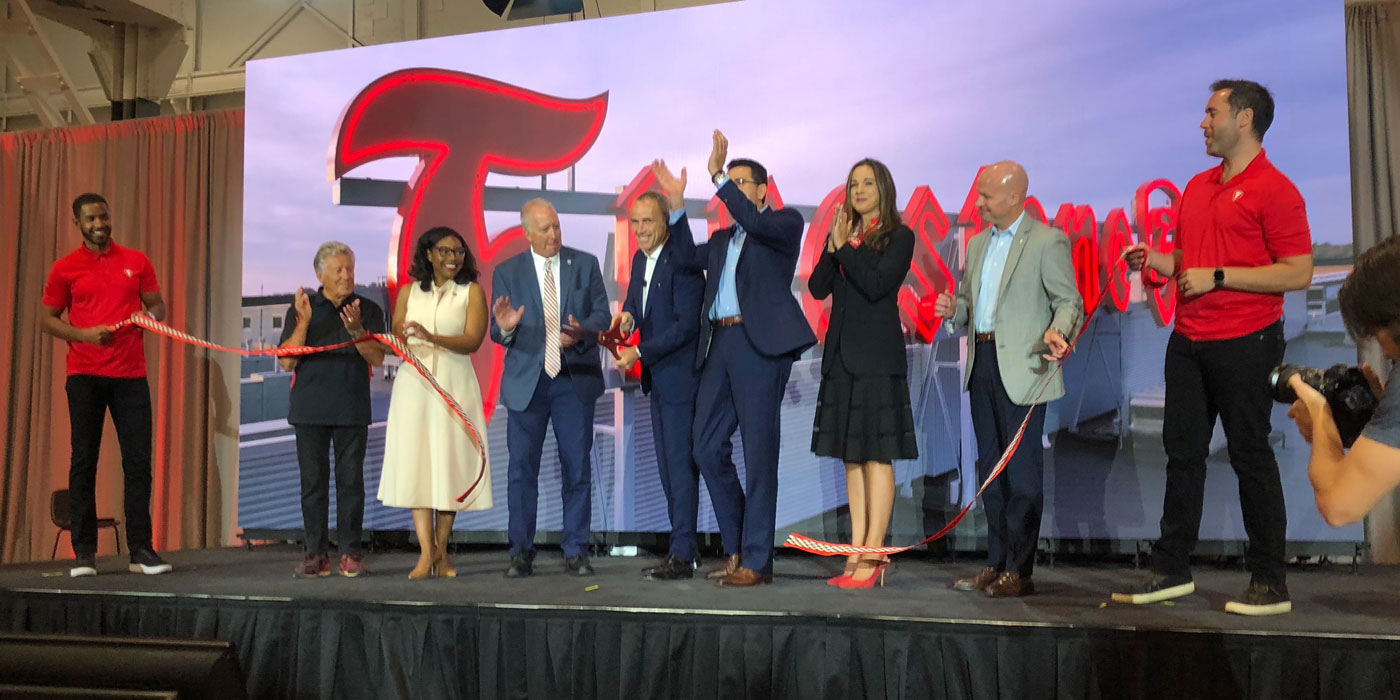 Home to 60 expert tire builders and manufacturing professionals, the new ATPC continues a legacy of tire manufacturing in Akron that began with the founding of the Firestone Tire and Rubber Company in 1900.

Bridgestone invested more than $21 million to build its new home for race tire production, which includes both new construction and the redevelopment of an existing Firestone-owned structure where tire assembly machines had previously had been constructed. Located across the street from the Bridgestone Americas Technology Center (one of three major R&D centers for Bridgestone globally and Bridgestone’s main R&D center in the U.S.), the 80,000 sq.-ft. ATPC features what the company calls “state-of-the-art manufacturing technologies” to advance innovation in race tires. According to Bridgestone’s Director, Race Tire Engineering and Manufacturing, Chief Engineer, Motorsports Cara Krstolic, many of the machines used in this production facility are unique to this location.

The ATPC will also manufacture small batches of specialty, prototype tires for testing and development purposes for both racing and on-road applications.

The ATPC is part of a series of investments Bridgestone is making in its Akron operations. In November of last year, the company announced a $6 million investment for the construction of a new test track adjacent to the ATPC to support passenger tire testing and development. The test track is scheduled to be completed in Fall 2022. Bridgestone has invested more than $125 million in its Akron operations since 2012, when the company opened the Bridgestone Americas Technology Center.

“The new ATPC is a reflection of both our proud history in Akron and racing while also exemplifying our company’s vision for sustainability in all aspects of our business,” said Paolo Ferrari, president & CEO, Bridgestone Americas. “For more than a century, Akron has been where our most advanced tires have been conceived, designed and built, and now we are furthering this legacy in a more sustainable production environment where the world’s best engineers, technicians and master tire builders will shape the future of tires and racing.”

Ferrari said the new ATPC uses 60% less energy than the company’s previous race tire manufacturing facility. Design and specification enhancements contributing to the increased efficiency include a more compact building footprint (the company took its existing approximately 1 million sq. ft. space down to closer to 80,000 sq.-ft.), insulated roofing, a more efficient boiler system, and high-mounted LED lighting throughout the plant. Even the company’s iconic Firestone sign hanging above the building had the neon removed in lieu of much more energy-efficient LED lights, Krstolic said.

Additionally, Bridgestone has purchased carbon offsets to cover the balance of its energy use to achieve carbon-neutral operations at the ATPC, supporting the company’s global goal to be carbon neutral by 2050.

Each season, more than 25,000 Firestone Firehawk race tires made in Akron are supplied to the NTT Indycar Series. Part of Bridgestone since 1988, Firestone has been the exclusive tire supplier for the open-wheel racing series in North America for the past 23 seasons.

Racing legend Mario Andretti, who was also in attendance for the facility’s grand opening, said that the future of the Indycar series depends upon relying on well-performing, versatile and safe components, something that he says he’s seen Firestone commit to firsthand for decades.

“I think I can speak for the entire Indycar racing community … What we see here is stability,” Andretti said. “We’re not ever going to be looking for an alternative supplier of something such as tires, trust me.”