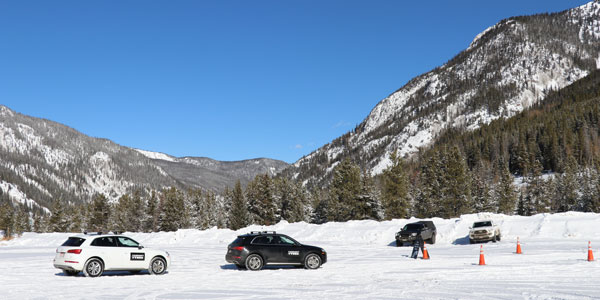 Nokian Tyres detailed its marketing initiatives and product strategies as dealer and distributors took to the snow to test the company’s tires in the Colorado mountains.

Capitalizing on the direct connection between hands-on experiences and product affirmation, Nokian Tyres invited more than 40 distributors and dealers to a product testing event from January 13-15 in Colorado at the Copper Mountain ski resort outside of Denver, where they could test their tires first-hand.

This event kicked off the New Year for the Scandinavian tiremaker and follows a banner year that saw the October launch of its Nokian One HT for pickups and SUVs in tandem with a grand opening ceremony for its first U.S. manufacturing facility in Dayton, Tennessee — which, according to Nokian, will allow the company to double its sales in North America by 2023.

Prior to actual tire testing, attendees first heard from Nokian executives where they learned about the company’s commitment to safety and sustainability, as well as the science and technology behind the manufacturing of its tire lineup.

Hans Dyhrman, director of marketing, welcomed attendees and expressed appreciation for their presence. “We are making huge investments in more marketing, increased availability, new products, but investments in you, as well. You, our retailers, are really one of the keys to making sure we have success out there. So, we are so thankful that you came and devoted your time here today.”

Dyhrman reiterated the company’s commitment to growth and its ambition to make sure it’s a consumer-trusted brand. “Our ambitions are starting to turn into increased brand awareness,” he said.

The past few years, Nokian has invested in local targeting by the Google ad network because “we’re invested in all of you, who are spread out all across the country.”

So, instead of blanketing the airwaves with national advertising, Nokian is focusing its marketing efforts on Google AdWords advertising, banner ads and the like to be very precise in targeting customers “and pushing them to come to your store through our dealer locator to make sure they can make that purchase,” along with micro-targeting through various social media channels, plus native content on their own platforms.

The interwoven connection between an emphasis on product awareness that builds traffic, that increases purchases, that builds loyalty has culminated in a “best in class, 78% brand loyalty for Nokian Tyres (based on independent research conducted by YouGov); something we are incredibly proud of,” expressed Dyhrman.

With product testing being the cornerstone of its innovation, Nokian has focused on its R&D stemming from its headquarters in Nokia, Finland, Dyhrman said. The facility encompasses everything from material development, all the way to testing, pointing to a long chain of events that need to happen to bring a tire to market.

“Each new product that comes to market exceeds the level that we’ve seen in the past through an assortment of performance criteria, which are heavily vetted through our winter-testing capabilities,” he added, as he referenced Nokian’s White Hell test facility in Ivalo, Finland that is 220 miles north of the Arctic Circle. The test facility experiences more than 220 days of winter per year. “More than half the year, we can test in those conditions,” Dyhrman said. A new tech center opening in Spain later this year will increase Nokian’s all-season tire testing capabilities, Dyhrman continued.

Steve Bourassa, director of products and pricing, gave attendees an inside look at what goes into the creation of Nokian tires, showcasing various formulation attributes, design and construction features, spotlighting their broad size ranges and detailing the company’s rigorous research and development processes—all key to the tiremaker’s quality and value proposition.

Bourassa said each tire is specifically engineering for certain performance characteristics with “small changes can have a tremendous impact on the performance of the tire.”

He provided an overview of the features of the tires outfitted on the vehicles that attendees would be driving during the hands-on testing, saying we are “heavily in an investment mode and developing new products all of the time.”

Among the many tires he covered in Nokian’s lineup, Bourassa detailed the attributes of the Hakkapeliitta 9, its flagship winter tire, that uses two different patented stud shapes to optimize performance while braking, accelerating and cornering.

The Hakkapeliitta 9 SUV, very similar in concept, has re-enforced shoulder blocks to improve stability and steering response, among its many features.

Bourassa also covered many of the technologies found in Nokian tires, including Aramid technology used in its SUV tires that provides unique durability and puncture resistance. Tire compounds with Aramid fibers make the tire more resistant to impacts and cuts that could otherwise easily damage it, says Nokian.

He also detailed Nokian’s Cryo Crystal 3 technology, small bio-material particles that act like built-in studs to improve ice grip, found on some of the Hakkapeliitta tires in its winter product lineup, and also covered functional siping and pump sipes (that suck up water and hold it before expelling it out the back of the tire), snow claws, deep snow grooves, and many other attributes found on Nokian tires and how they translate into safety and confidence for the consumer.

The product testing experience put Nokian tires through a series of circuits on a snow and ice track they built at the ski resort. Attendees took turns running vehicles through four courses to get a feel for how Nokians compared to OE fitments on the rental cars used in the event. Those courses were:

Members of the Nokian marketing team conducted in-car video interviews with drivers to capture first impressions. The event also played host to various team-building activities including a scavenger hunt, free time for skiing and networking spent during meals, highlighted by a dinner atop one of the resort’s mountains.