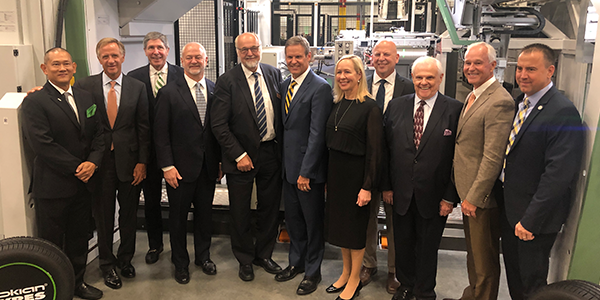 Celebrating a milestone in expanding its North American presence, Nokian Tyres ushered in the grand opening of its first U.S. manufacturing facility at the start of this month.

Celebrating a milestone in expanding its North American presence, Nokian Tyres ushered in the grand opening of its first U.S. manufacturing facility with Nokian executives, Tennessee state and local officials and close to 300 dealers in attendance.

“Just two years ago, we gathered on a hot September day to break ground in the middle of a beautiful grassy field. At that time, it still took a bit of imagination to see what would take shape here. Now, we see a gleaming facility that will produce safe, sustainable tires right here in the heart of southeast Tennessee for drivers in North America,” said Hille Korhonen, president and CEO of Nokian Tyres.

The opening of the 830,000-square-foot plant, located in Dayton, Tennessee, held different significance for the various groups that helped make it happen: For Nokian, it’s a pathway to double its sales in North America by 2023; for the state of Tennessee, it’s a $360 million economic stimulus for rural Rhea Country; and for the company’s dealers, it means greater availability of tires tailored to the needs of customers in the North American market.

“The decision to do this has been driven by the demand from our dealers,” said Mark Earl, Nokian Tyres senior vice president who oversees the company’s North American operations. “They’ve been saying we would love to sell more tires that you guys make. We would love to have better availability. We wish you could make them here. We’re listening to what our customers have asked us to do, and we built this facility for them.”

For those that call the area home, the facility brings in more jobs. In the next few years, the plant is expected to hire as many as 400 employees.

“There was a reason Nokian decided to put its plant here, but one of them was because of a belief and understanding that the people of Rhea County, the people of Dayton, who have filled and will fill the jobs going forward, your work ethic, your value system, who you are, is one of the things that’s so attractive to a global company like Nokian Tyres,” said Gov. Bill Lee, addressing the plant’s 60-member launch team at the facility’s opening ceremony. “This is a global company that already has a deep commitment to investing in our state. This big, state-of-the-art facility is housing a company that I believe will change the landscape of this community in a positive way for a long time.”

Nokian considered 80 other sites to build its third manufacturing facility before deciding on Dayton for the area’s logistical convenience, array of skilled workers and state and local support. Former Tennessee Gov. Bill Haslam is credited with forming a relationship with Nokian early on and igniting the partnership between state, local and Nokian officials.

“Yes, we will produce millions of tires here and hire hundreds of workers. And yes, we plan to grow our global business by expanding our presence in the North American market, but the economic impact we’re helping to create doesn’t just exist in a vacuum,” Chia said. “It strengthens this community and empowers its citizens to create a promising future here.”

In a display of the community’s robust workforce, Nokian received more than 1,000 applications to fill jobs on the plant’s 60-member launch team. To immerse its team in Nokian values and training, the company took about four dozen of its new employees to its existing factories in Russia and Finland to teach them the tire production process and allow them to bond. The launch team also spent more than 1,000 hours serving the Rhea County community during their first month of training.

Currently in the trial production stage, the factory will be ready to make tires for commercial use in early 2020. Nokian says it will manufacture a mix of all-season and all-weather products to fill expanding North American demand. Channeling the company’s Scandinavian values of safety and sustainability, the facility has standards in place that minimize waste and emissions. Solar panels will also be installed in the parking lot, and the company will recycle excess materials that result from production.

At the event, Chia also announced that the company will launch a program called Nokian Tyres Road to Sustainable Success in the coming weeks and months. With a goal of strengthening education and sustainability in southeast Tennessee, the program will partner with local organizations to reward high-performing students and promote sustainable living in the community.

“We are passionate about this place and its people, and we plan to work with our neighbors to achieve generational impact here,” Chia said.

The company continues to develop the site with the construction of an administrative office building that will include offices, meeting spaces, and areas devoted to employee wellness. It will also build a highly automated warehouse that will store as many as 600,000 tires.

“As a company, we are ambitious and we are setting the bar high,” Korhonen said at the factory’s opening ceremony. “It is because of so many people, including all of you, that today we celebrate what has already been accomplished and begin to imagine what is possible as we continue our beautiful journey together.”

'Driven by the Demand of our Dealers': Nokian Tyres Celebrates Opening of US Plant