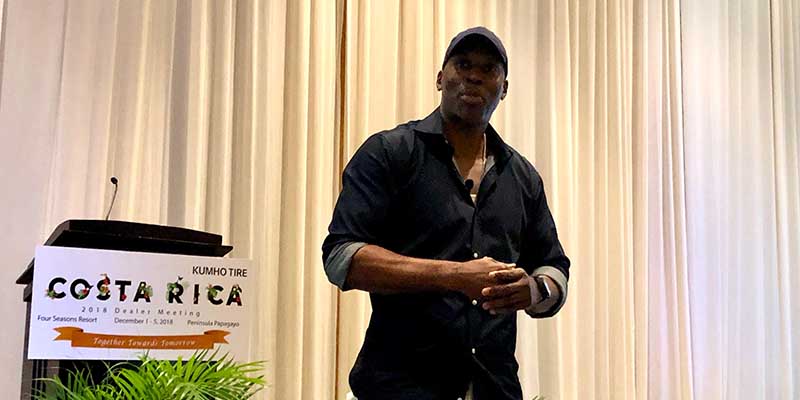 The Kumho Tire USA Brand will be making even more of a splash in digital marketing and social media in 2019, which the company plans to trickle down to its tire dealers through local geo-marketing campaigns. 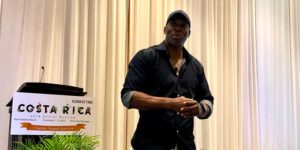 The Kumho Tire USA Brand will be making even more of a splash in digital marketing and social media in 2019, which the company plans to trickle down to its tire dealers through local geo-marketing campaigns.

Sean Denlein, executive vice president and sales and marketing for Kumho, announced that the company plans to leverage its partnership with the NBA to create regionally targeted social media posts that drive brand awareness in a dealer’s local market. Denlein shared the company’s plans at its 2018 dealer meeting among the lush landscapes of the Costa Rican coastline.

As the most followed sports league with the most engaged fans on social media, Denlein said aligning Kumho with the NBA allows its brand to reach more than 30 million people on Facebook and Instagram through sponsored posts on the NBA’s social media platforms. Its partnership with the NBA and its social media following also allow the company to create content for its target audience: those 18-34 who own or lease a vehicle, which makes up 28.3 million people in the U.S, according to Kumho.

Not only does Kumho seek to bring its partnership with the NBA to a localized level, but the company also hopes to use its social media influencers to drive traffic to local markets, Denlein said. Its influencers include Atlanta-born rapper T.I., Los Angeles Rams wide receiver Brandin Cooks and Washington Wizards point guard John Wall. Take a look below the commercials and videos that the company has done with these celebrities, which aim to communicate the lifestyle of the Kumho brand and tell the stories of these celebrities.

T.I and Kumho Tire on Community

Kumho’s partnership with rapper T.I showcased his hometown of Atlanta, which is where Kumho Tire USA is headquartered. Denlein said in Atlanta, Kumho has also created lifestyle campaigns with National Car Care, Peachtree Road Race and Susan G. Komen. The company has also partnered with the Atlanta Hawks and the Big Brothers, Big Sisters Program.

Denlein said Kumho is also in talks with professional racecar driver Collete Davis, who Denlein says has a strong following among women in the automotive segment. Denlein said Davis will build a custom car alongside Kumho and KIA for a nationwide motorsports campaign. He hopes to bring celebrities like Davis who communicate the lifestyle of the Kumho brand for special events and other campaigns around local dealerships.

Marketing Moves: Kumho Tire, the NBA and You