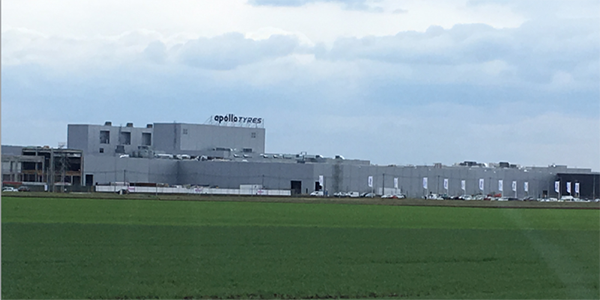 As part of its commitment to global expansion, Apollo Tyres Ltd. celebrated the opening of its new manufacturing facility in Hungary on April 7. Located 44 miles outside of Budapest, the location is intended to support an increasing number of OE customers for the growing tiremaker.

As part of its commitment to global expansion, Apollo Tyres Ltd. celebrated the opening of its new manufacturing facility in Hungary on April 7. Located 44 miles outside of Budapest, the location is intended to support an increasing number of OE customers for the growing tiremaker.

“With this inauguration today of our Hungary greenfield facility, we have crossed another milestone in our global growth journey,” said Onkar Kanwar, chairman of Apollo Tyres. “This facility will help us further increase our presence and market share in Europe. From being a replacement market focused company in Europe, we [will] soon be starting supplies of our tires to all the leading OEs in Europe.”

An estimated 1,400 guests gathered inside the new facility for the opening presentations, celebration and factory tours. The formal address was also broadcast live to another 16,000 members of the “Apollo family” watching worldwide. With the smashing of ceremonial coconuts by Chairman Kanwar and Hungarian Prime Minister Viktor Orban, and pressing of a giant “on” button, audiences watched on large screens as the first tire – a 16-inch all-season radial – was produced from within the factory.

The plant is an estimated $505 million investment for the Indian-based tire company, its first greenfield facility outside of India, and the company’s second production plant in Europe. Situated on a 7,200-acre parcel of land off a main highway, the new facility is highly automated, using robotics and state-of-the-art technology to deliver high quality and automated consistency from compound to construction to final product.

Once fully operational, the plant is expected to produce 5.5 million passenger and light truck tires and another 675,000 TBR commercial tires under both the Apollo and Vredestein brands. These tires will serve the replacement market as well as future OE business within Europe. 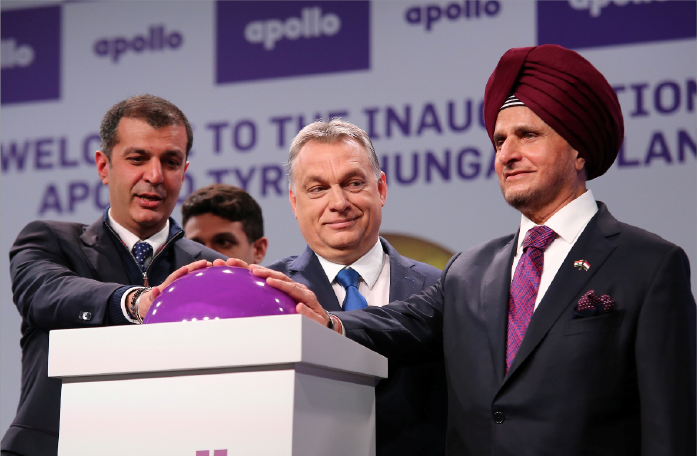 While the new Hungary plant is a key component to support the company’s growth in the European OE marketplace, the United States is the “next stop,” according to Neeraj Kanwar, Apollo’s vice chairman and managing director.

“I think the U.S. plays a very important part for us in our growth strategy,” said Kanwar. “Now that we have two domestic markets – India and Europe – our next stop has to be the U.S.” “As you know Steven [Smidlein] has joined us as senior vice president of North American market, so there’s a lot of emphasis on building the marketing and the brand. That’s how we want to grow,” said Kanwar, who hired Smidlein in April 2016. “I think creating a brand in [the U.S.] market itself is challenging.”

Kanwar said he’s especially pleased with both the Apollo and Vredestein products and their performance when benchmarked against top competitors in Europe.

“We believe we have a good story; we believe we have good products, highly technical products,” said Kanwar. “Today I am happy to say that we are clearly the radial leaders in India, whether it’s truck or passenger.”

“Given the confidence we have in technology, we believe we can create a market and a brand in the U.S. Currently we are selling very small amounts in the U.S. but there is a whole R&D journey for the next two years that will take our coverage to 70% of what the U.S. market needs – today we are at 5%,” he adds.

Kanwar said the priority is doing the “hard work” when it comes to getting the right products ready for the U.S.

Smidlein confirmed that the two-year go-to-market journey has already begun. To ensure the right product for the unique needs of North American consumers, market research and focus group feedback between dealers and developers is already underway. The process goal is to identify key components and areas of differentiation, then provide preferences and other details to inform Apollo engineers as they design tires exclusively for the U.S. market. Meanwhile, Smidlein is busy building a strong team and putting a structure in place for anticipated market growth, though distribution remains a challenge.

When asked, Kanwar confirmed that their next manufacturing facility will be in the U.S., though he said no specific date or plans are being considered.

“Once we create a market and a brand, obviously freight is expensive so we would have to look at setting up a tire plant [in the U.S.],” said Kanwar. “Now, I’m talking four to five years from now. But the top [priority] is setting up a market for the U.S. customer and that is what Steven and his team [are] doing.”

When asked about strategy to infiltrate a U.S. market already thick with competition, Kanwar responded with focused confidence.

“Europe is also an overcrowded market. You’ve got many more brands here than the U.S. and you also have the Chinese. But we clearly now have a 3% market share in Europe. That’s on the back of providing good technology to the customer, benchmarking our tires against the best and achieving those [strong] positions as far as testing is concerned,” he said. “Obviously it’s a challenge but if we are able to prove to the customers that our tires are unique and the prices we are going to be offering – the combination of those two, in the end the dealer can make money with us; he’s got a brilliant solution.”

Kanwar also emphasized the importance of research, development and feedback.

“My idea is to create a small cell that will only look at U.S., based in the Netherlands in our European R&D center, and then have [several] people on the ground in the U.S. working under Steven to give market feedback and detailed analysis to the guys over here so that we can come out with the right product.”

“I’m not in a rush. I want to enter the market properly. I don’t want to make mistakes. You only get one opportunity given that it’s such a crowded market. So we need to go with the right product, the right brand strategy, the right retail strategy and then go in. If we are able to do what we need to achieve the coverage of the market – today we are at 5% we want to get to 70%. It will take us two years. So I see that within five years, I believe that 10% of Apollo revenue [globally] should be from the U.S.”

Kanwar said Vredestein will be the premium brand for the passenger and LT segment in the U.S. When asked how the new plant in Hungary will impact North America, Smidlein said, “This shows that the North America market is our next step. This plant will help us with capacity. Currently we get all of our Vredestein tires from the Netherlands. [But what it really shows is] the globalization of Apollo.”

The new plant marks the sixth global tire manufacturing facility for the company. Construction outside Budapest began in April 2015. The inauguration also marks the 40th anniversary for the tiremaker.