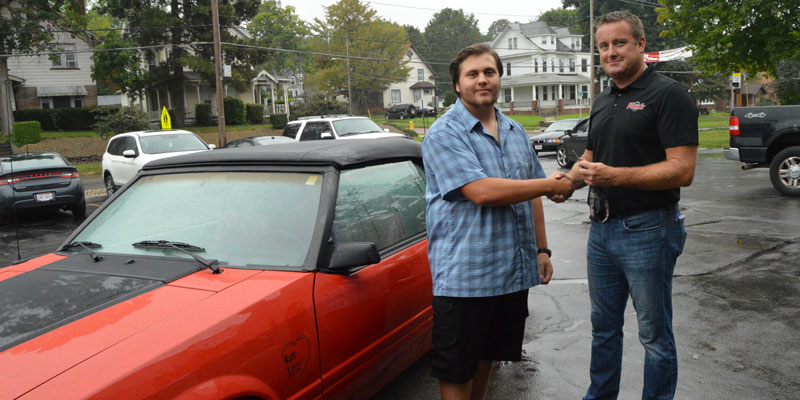 For many teenagers, finally holding the key to their first car is symbolic of newfound freedom and independence. Thanks to Van’s Auto Service & Tire Pros in Wadsworth, Ohio, one 16-year-old’s first daily driver represents much more than access to the open road – it serves as a tribute to a close friend who was killed by a drugged driver years ago.

Every year for the past five years, Joshua Baughman, the owner of four Van’s stores in Ohio, uses his local newspaper to request nominations for a citizen who deserves a “vehicle makeover.” His Wadsworth location – about a 30-minute drive west from Akron – picks a winner and gives that person service/repair work free of charge. It was in the Van’s contest two years ago that then-14-year-old Michael Origlio’s 1986 Mustang was chosen.

“Michael said he was at the time 11 years old, and he looked up to a 16-year-old family friend, Katherine. So, he explained that five years ago she was involved in a car accident, was hit by a driver who was high on heroin and, unfortunately, lost her life,” Baughman said. “This Mustang was going to be her vehicle. Her dad was going to give it to her, and they were going to slowly restore it together. Once she was involved in the accident, he lost interest in doing anything with the vehicle and then decided to give it to Michael as a way to remember Katherine. [Michael] wanted to get into the automotive business and [Katherine’s dad] thought he could restore it.”

After two solid years of restorative work, Baughman has finally handed the keys to Origlio, who took an inaugural ride down the street with Katherine’s father in the passenger seat on Aug. 27. Because Origlio is an aspiring mechanic himself, Van’s gave him the opportunity to learn to mount the tires on the vehicle alongside the shop’s technicians.

Baughman said he put roughly $15-20K into the vehicle, which had to “be stripped down to the guts.” Since Van’s doesn’t do bodywork, Baughman said he had to partner with the nearby Eddie’s Auto Body in Norton, Ohio, to help complete the project. Once the restoration was complete, as a finishing touch, a heart-shaped emblem based on a tattoo Katherine had designed herself was added to both sides of the vehicle.

“It’s an older Mustang that’s very hard to find parts for; it’s not one of the ones people usually try to restore,” he said. “It was a lot more than we planned to undertake, but because of the story behind it and the family we were doing this with … we just kind of embraced this heartfelt tribute to a girl who lost her life.”

Origlio said because of the vehicle’s sentimental value, he plans to find another car to be his main form of transportation, but he’ll still show off his Mustang at car shows.

“No drag strips,” he said. “It means a lot to me. It means everything to me. I know it would mean a lot to Katherine.”