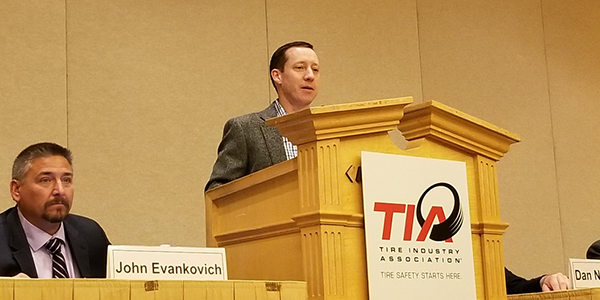 The Tire Industry Association took a stand on tire registration fines as well as infrastructure bill funding in the two resolutions it passed at its annual meeting Monday.

One urges the National Highway Traffic Safety Administration (NHTSA) to adopt fair and reasonable fines for tire registration violations; the other expresses support for President Donald Trump’s proposed $2.5 billion infrastructure bill yet opposes current proposals for funding the bill, such as reinstating the Federal Excise Tax on tires and retreads.

Currently, fines for failing to register tires or making a mistake on the registration range from about $22,000 per violation up to $1.8 million per location, according to TIA.

This year’s resolution on registration fines builds upon a resolution passed at last year’s meeting, which stated that TIA would work with the U.S. Tire Manufacturers Association as well as the NHTSA on tire registration and recall procedures.

The text of both bills are below:

“Whereas, the President of the United State has proposed a $2.5 trillion infrastructure bill; and

“Whereas, TIA and the tire industry has supported every major highway infrastructure bill adopted; and

“Whereas, the tire industry has dutifully collected tire taxes for over a century; and

“Whereas, TIA supports the massive infrastructure proposal and supports the continued collection of reasonable industry taxes; and

“Whereas, the President’s proposal is a sweeping reform package that cuts across a wide spectrum of needed upgrades, but is reliant on highway user taxes exclusively; while only $85 billion of the $2.5 trillion is targeted for highways.

“Now, therefore be it resolved by TIA on this fourth day of November 2019, in the General Assembly, that the association will work with Congress to support an infrastructure bill, yet would oppose unreasonable and unfair proposals that would:

“While TIA supports infrastructure proposals and the concept of user fees, TIA opposes the current proposals that all funding would come from only one sector.”

“Whereas, the Tire Industry Association recognizes that the Federal government has historically regulated both “mandatory” and “voluntary” registration programs to enable tire manufacturers to contact consumers directly in the case of a recall; and

“Whereas, tire retailers have always believed that the potential fines for failing to register a tire or for inadvertently making a mistake recording the tire identification numbers have been excessive and unfair; and

“Whereas, a Task Force of manufacturer representatives from the United States Tire Manufacturers Association (USTMA) and the Tire Industry Association (TIA) are working to propose to the NHTSA an industry consensus registration regulation to be considered; and

“Whereas, the fine for failure to register tires or a retailer mistake in registering tires if not addressed would be set at up to $22,329 per violation and up to a potential $108,895,910 per location; and

“Whereas, TIA has proposed the new NHTSA regulation stipulate that there shall be no monetary fines for the first two violations; that monetary penalties could only be assessed after the dealer or distributor has been issued two written warnings; and that a third violation could not exceed $500 and that any subsequent penalty could not exceed $1,000; and that no more than one penalty could be assessed on a single day.

“Now, therefore be it resolved, by TIA assembled this fourth day of November 2019, in General Assembly that the association urges tire manufacturers and NHTSA rule makers to carefully consider the financial impact of potentially crippling fines. While recognizing the importance of a registration system, we urge NHTSA to adopt a fair and reasonable industry proposal.”