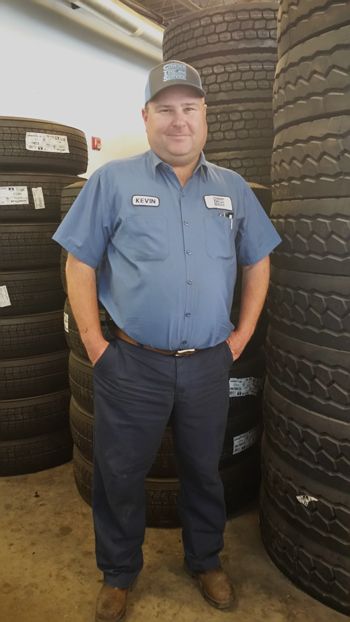 Kevin Davis grew up immersed in the tire industry. By the age of 6, he was learning to change tires; by the time he was out of high school, he was running his own service truck; and by the age of 19, Davis became an independent tire dealer.

Now, Davis and 62 employees successfully run the retail, commercial, and off-road tire operations of Cowser Tire and Service in Forth Worth, Texas, and are in the construction phase of building a retread plant – a new frontier for Cowser Tire. More important to Davis than expansion, however, is helping people, which is why Davis is proud to be an independent tire dealer.

Davis is truly a people person. He loves to joke with people, talk to people and make deals with people – which he says is part of the freedom unique to independent tire dealers.

“I don’t have a corporate office over my shoulder saying, ‘Oh, you can’t do this, you can’t do that.’ You seem to have a lot more freedom as an independent tire dealer, bottom line,” he adds.

Growing up in the tire industry with his father gave Davis the building blocks to start his own business.

“My dad has always been in the tire business, and I learned everything I know from him,” Davis says.

“I used to go to work with my dad when I was very young. I learned the ins and outs of the tire business, and the labor part, and I always watched and listened in on the sales part. I felt like by the time I was 16 years old, I could’ve probably operated my own tire store – of course teenagers think they know it all anyway,” he laughs.

In 1989, Davis started his own service truck after he graduated from high school. His father had since sold his tire store, so Davis reached out to some of his father’s old accounts and began servicing their vehicles.

“Eventually, they started buying tires from me and it kind of snowballed from a single service truck working out of my mom’s garage into a full grown business,” he says.

Being a young tire dealer was a challenge, Davis says. Gaining people’s respect and obtaining insurance and financial backing was difficult at such a young age. A lot of hard work on Davis’ part and the help of his father got the business started.

To this day, Davis works just as hard. He works a lot of nights to get trucks back on the road and takes road service calls. He says he does it for the people, and the customer always comes first.

“I try to tell everybody here they need to treat customers the way they’d like to be treated, the way God would intend for you to treat someone,” Davis says. “That’s how we’ve always done business, and we always will do business that way as long as I’m here.”

Advertisement
In this article:Carley Hull, Cowser Tire, Cowser Tire and Service, Fort Worth, Kevin Davis, Proud to Be a Tire Dealer, Texas