North American leadership at Nokian Tyres shares the company’s plans to expand its footprint in the U.S. – not just in the winter tire segment.

At the heart of its strategy for the next several years, Nokian Tyres is planning to grow its presence in the all-season tire market by leveraging its existing reputation in the all-weather and winter tire segments.

Growing in the all-season segment is just one facet of Nokian’s strategy that it believes will allow it to double its sales by 2023, its North American team explained to a group of dealers, distributors and the media at its recent winter tire launch in Copper Mountain, Colorado. To accomplish that, it plans to attract more U.S. dealers to the brand and boost its production with a tire plant in Tennessee slated to come on line in 2020.

“I think that even in places where maybe they have a tradition of going winter and summer, that more and more consumers are saying, ‘why can’t I have a tire that I just leave on year round?’ and we’re trying to appeal to those consumers with the all-weather tire,” said Mark Earl, president of Nokian Tyres’ North American arm. “That’s where we have the opportunity to really tell them (consumers) the all-weather story and take advantage of that trend and educate consumers.”

The company is also beefing up its research and product development in all-season tires by adding an R&D center and test track in Spain. According to Earl, those initiatives are a recipe for an expanded North American footprint.

“Our R&D engineers have learned a lot about driving in extreme conditions over the years and developed a lot of expertise in compounding, testing and tire structure. At this point as a company, we feel like we’re really ready to take on some new challenges. We’re saying, OK we want to take that same level of care and quality in our R&D and move it into what would be considered summer tires or all-season tires, depending on where you are.”

To ramp up creation of all-season product, Nokian is working on getting its test center in Spain up and running, which is expected to be operational by the start of 2020.

“We want to continue to evolve in our knowledge about those kinds of tires,” Earl said. “We’ll develop new tires and compounds and new constructions from that R&D effort that will eventually end up in our tires in North America and southern Europe and in other places where temperatures are warmer year around.”

Earl said he believes tires developed there will eventually be manufactured at the company’s Dayton, Tennessee plant, which recently started the hiring process for its first round of workers. That facility is set to start production in 2020.

By broadening its product categories, Nokian plans to increase brand awareness, and in turn, hopefully, increase the number of dealers that carry its products. Earl wants dealers, for example, in Alabama and Georgia, to say, “I can pick up your line now. You’ve got what I need.”

“We’re just going to have more availability of tires because we’ll have a new factory,” Earl said. We’ll have more products to sell within our catalog, and we’re going to open sales to more dealers but we’ll do it in the same way we’re doing it today…. There’s a certain amount of exclusivity that we try to maintain with our dealer base, and so we’ve been really careful about how we spread out.”

Earl said the expansion of the company’s dealer network will be coupled with a marketing strategy that will attract future Nokian customers. Wes Boling, marketing communications manager for Nokian, said while the company’s marketing tactics may change, the message will be the same: “Regardless of market segment, we make some of the safest, most sustainable tires in the industry. And we’ll continue to invest heavily in research and testing for our all-season products, just as we do for our winter and all-weather portfolio,” Boling said.

Boling said Nokian research has proven that its customers are brand loyal and a majority say they would buy the company’s products again.

“We believe that trend will continue among our all-season drivers and serve as a grassroots complement to the larger-scale marketing efforts we’re putting forth,” he said.

Nokian North American leadership reiterated that as it grows, its partnerships with existing and new dealers will continue to be nurtured.

“ A large investment every year goes to getting down to the ground level and getting people together from as many shops as we can and really going over products,” said Steve Bourassa, product manager for Nokian Tyres. “That’s not just down to shop owners and counter guys. We believe the guys in the back of the shop are also sales guys, right? The more of those types of guys that can represent our brand and talk about our brand and how great it is. Word of mouth goes a long way. We try to stick to that face-to-face.”

Getting In-Depth on Tread Depth with Anyline's Chief Product Officer

TechForce CEO: The Tech Shortage Will Pass if the Industry Steps Up Now
Connect with us 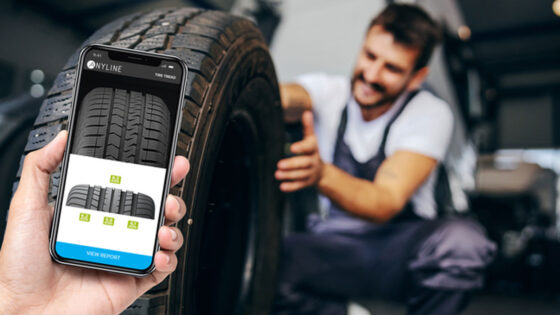