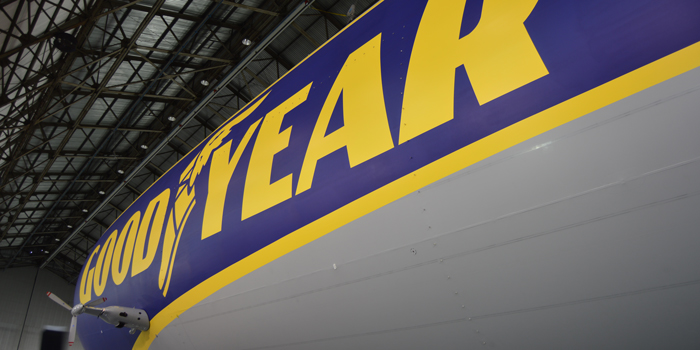 After nearly a decade, a Goodyear Blimp will once again fly over the Toronto area as it provides aerial coverage of the World Cup of Hockey and Toronto Blue Jays for television partners, including ESPN and Rogers Sportsnet.

Wingfoot Two, Goodyear’s newest airship, will make its first international expedition starting with a flyover of Niagara Falls, including the Niagara River, Clifton Hill neighborhood and Ferris Wheel, Brock’s Monument, and Niagara-on-the-Lake before proceeding to Toronto.

Additionally, Wingfoot Two will pay tribute to the Niagara Falls region and take aerial photos to coincide with the Tourism Partnership of Niagara’s #the8thwonder campaign, which recognizes the Niagara region as the Eighth Wonder of the World.

“The blimp has such a powerful connection with those who see it and we are thrilled to be back in the Toronto area on this extended visit,” said Seth Klugherz, Goodyear’s North American director of marketing. “Through community integration and stunning aerial coverage, the blimp will leave a lasting impression on Canadian consumers – one that we intend to continue.”

During its visit through Oct. 2, Wingfoot Two will be stationed at Oshawa Executive Airport and will appear at some of the biggest events and sites in the Toronto area and Niagara region. Goodyear encourages those who see the Blimp to share photos on social media using the hashtag #TrueNorthBlimp.

Wingfoot Two was originally scheduled to cross the border into Canada on Sept. 23, but has been postponed due to inclement weather. Its flight plans include flyovers of some of Niagara’s landmarks including the Niagara River, Clifton Hill neighborhood and Ferris Wheel, Brock’s Monument, and Niagara-on-the-Lake before it proceeds to the Toronto area.

Since the first Goodyear Blimp flight in 1925, the iconic airships have appeared at hundreds of the biggest events and landmarks throughout North America and around the world. Wingfoot Two’s inaugural flight over Niagara Falls will pay tribute to the region and capture stunning aerial photos to coincide with the Tourism Partnership of Niagara’s #the8thwonder campaign to recognize the Niagara region as the Eighth Wonder of the World.