When Danny Thompson attempts to exceed the existing internal combustion wheel-driven land speed record next summer, he will have the support of Mickey Thompson Tires & Wheels. 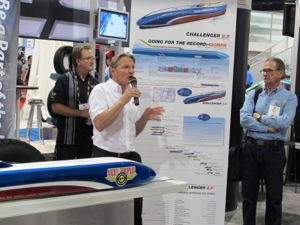 Thompson, who plans to exceed the existing record of 417 MPH, with a goal of 420 MPH, will complete the restoration of his father’s custom-built Challenger 2.5, building the fastest piston-powered car in the world. He will attempt the feat in summer 2012 on the Bonneville Salt Flats.

Mickey Thompson will build a website for Danny Thompson Motorsports, create a promotional video to market the land speed record initiative and create video content, among other things.

“It is incredibly exciting for our company to play an integral role in assisting Danny in his efforts to continue his father’s legacy and achieve motorsports history,” said Ken Warner, Mickey Thompson vice president of sales and marketing. “This will be the realization of a dream come true for both Danny Thompson and the late Mickey Thompson, and we want to do all we can to support this effort.”