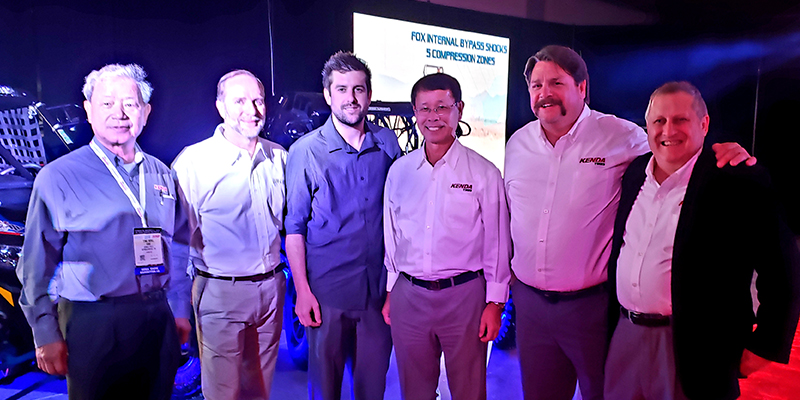 The event, which was hosted at the SpeedVegas facility, saw Vanden Huevel honored by Kenda for his recent championship win, which he accomplished with the very same Kenda DOT tires that are available to the public. Attendees were invited to try out some of the same tires that Vanden Huevel drove in the Lucas Oil Off-Road Racing Series, including the Kaiser KR20 tires on drift and exotic cars as well as Klever R/T KR601 on trucks.

Bill Smith, president of Lucas Oil Off-Road Racing Series, presented Vanden Huevel with the Pro 2 championship trophy. He was joined on stage by members of Kenda’s North American and worldwide leadership team. The win was a validation of Kenda’s “Podium to Pavement” campaign, which demonstrates the extreme-condition performance of the company’s consumer tires.

According to American Kenda Rubber Co. president Jimmy Yang, the design and quality of the KR601 tire that Vanden Huevel in his championship win allowed it to excel without any changes for the stresses of the racetrack.

“When we design the tires, the engineer has in their mind that they are going to get a very high-quality tire,” Yang said. “Having the chance to use the same tire, (drivers) discovered that the tires are so well designed that without any modification it performs very well.”

Vanden Huevel expressed his satisfaction with the partnership with Kenda in remarks after receiving his trophy.

“Kenda Tires… awesome tires,” Vanden Huevel said. “We went over (Kenda’s) brand new KR601 R/T tire, and won a lot of races this year. We’re proving the product out on the racetrack…. It’s the exact same tires that are on the street are on my truck. So big congratulations to my team at Kenda…. it really could not have been a better experience for me.”

Advertisement
In this article:Kenda Tires