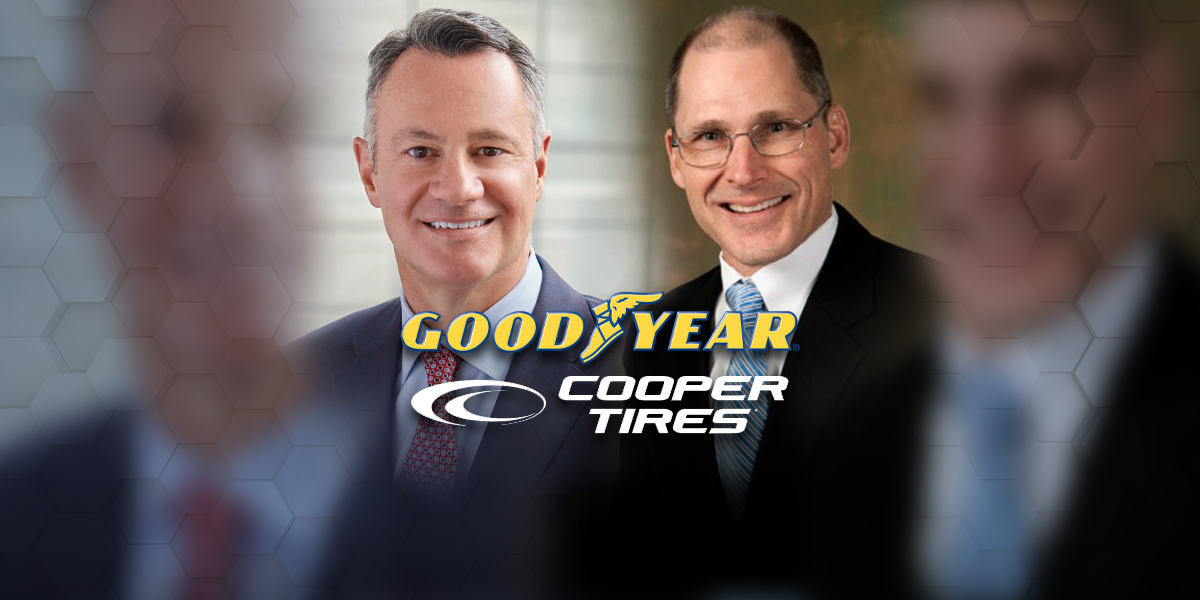 Combining forces with Cooper Tire will not only strengthen Goodyear’s financial foundation but will also allow the company to expand its services and products to both dealers and consumers, according to Richard Kramer, the company’s chairman, CEO and president.

Kramer and Cooper Tire President and CEO Brad Hughes outlined the benefits of the $2.8 billion acquisition in a press conference for trade media Monday afternoon, praising the deal as an opportunity for future value creation. While the acquisition is subject to SEC approval, Goodyear said as a combined company with Cooper, it would bring in $17.5 billion of revenue and produce 200 million units of tires per year worldwide, with 64 million units produced in the U.S.

“It gives us a profile of profitability and margin improvement,” Kramer said about the deal. “Looking ahead, it really sets us up well to make sure that we, as Goodyear, continue to lead this industry as we go out into the future.”

Kramer outlined the benefits for Goodyear, which include strengthening the company’s position in the global tire industry and nearly doubling its presence in China. The combined company, which will have more than 50 factories worldwide, would also enhance services and products for dealer customers and consumers through distribution and retail offerings. It will also offer the two companies opportunities to collaborate and strengthen new mobility and fleet services.

“We believe that bringing the two companies together will make a stronger and more competitive force in the industry, which is challenging,” Hughes said. “It’s a global industry with a lot of competitors and a lot of new technology coming to the market. Bringing these two teams – the two companies, the two strategies – together, we think we’ll emerge as a stronger entity.”

A Win for Dealers

Kramer said the combined company will be able to offer dealers a wider array of products, giving them the ability to serve any customer who comes into their store.

“By being able to put our networks together, our products together, our offerings together, our services together… I think the service proposition actually gets better for them [dealers] going forward,” Kramer said. “I would say they should feel good about it. Supply and service ought to be something that improves.”

That includes service through distribution channels such as TireHub, the national distributor Goodyear and Bridgestone created for their products in 2018. While the two companies have “synergies in place for distribution and warehousing,” Kramer said a picture of what that footprint looks like will be made clearer in the future.

Hughes said while initially dealers may view this as a risk, the benefits in the context of their business will be realized down the line.

“You think about the resources that are available to both companies to develop tires and to make sure that we’re bringing those to market very competitively at a good pace… There are fresh products out there all the time. I think this offers an opportunity.”

Through the combined company, Kramer said dealers will be able to sell a “combined portfolio of complementary brands across a value spectrum.” It also enhances Goodyear’s depth in the “highly profitable” light truck and SUV segments, in which Cooper’s portfolio is well-positioned as a leader, Kramer said.

While the two entities are still operating separately until the deal closes, Kramer said more work will need to be done to integrate the brands, with Goodyear being a key premium brand in the future.

“With the combination of the portfolios that we have – think of Goodyear, Dunlop, Kelly added to that Cooper, Mastercraft, and a number of brands that all play in their right segments. We don’t view these as necessarily replacing each other, but rather being complementary and offering that enhanced value proposition to our customers and consumers going forward.”

Under the deal, Goodyear would be become the sole U.S.-based tire manufacturer, which not only strengthens its position in North America but also around the world. Another benefit for Goodyear is an increased presence in China.

“The transaction, in our view, has clear and compelling strategic logic,” Kramer said. “It essentially doubles our size [in China] and gives us more capacity and better relationships – even deeper relationships with the OEMs and particularly the local automakers there. This is a key area. As you know, between the U.S. and China is where the growth and aligned share of the global tire industry sits. It’s clearly a benefit for us going forward.

“Goodyear is the U.S. leader in the global tire industry and this certainly solidifies and enhances that position,” Kramer said about the purchase.

The acquisition of Cooper also offers opportunities for greenfield expansion, for example, at Cooper’s Mexico and Serbia plants. Kramer said these opportunities to build or expand on existing low-cost manufacturing facilities from the ground up often yields higher returns on investment.

Kramer said the deal gives Goodyear a stronger financial foundation and an improved balance sheet, including $165 million in savings realized over a two-year period related to overlapping corporate functions and realizing operating efficiencies.

“Even though we took on debt for this transaction, our credit metrics actually are improved from doing this, and it also gives us the opportunity to optimize our combined manufacturing operation.”

The combined company will also have tax benefits to the tune of $450 million or more by utilizing Goodyear’s available U.S. tax attributes that are slated to reduce the company’s cash tax payments and position it to generate additional free cash flow.

Lastly, the combined company will have increased scale to continue to invest in new mobility and fleet services, Kramer said.

With an eye on sustainability, he mentioned Goodyear’s research in using soybean oil to replace tire chemicals, coupled with Cooper’s research into alternative natural rubber sources, could position the company for a strong, sustainable future.

On the new mobility and EV side, Kramer said Goodyear continues to optimize its tires for EVs, with nearly 50% of its new OE fitments geared for EVs. The company is also researching electric and autonomous fleets and currently has about one billion miles of test fleets working with its intelligent tire system, which can read tire pressure, temperature, load and collect other data to optimize tire performance.

Hughes and Kramer said the scale achieved from the combined company will allow Goodyear to have the ability and the resources to invest going forward.

“Bringing these two portfolios together, combining them and looking where there is overlap and opportunity to accelerate, to prioritize and to put certain technologies together, to advance the outcomes faster – that’s the exciting part here,” Hughes said. “You’ve got more scale over which you can make those types of investments and actually put them into real tires on the road…I think bringing that together is just going to help the combined company bring [these technologies] to the market even faster.”