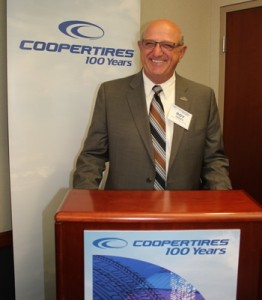 “The materials we’re going to develop will help us get ahead of the curve,” he said.  Instead of waiting for products to be designed and than materials developed, Armes said Cooper will be able to combine the process and leverage that on a regional basis.

The center will also allow Cooper to spend more time on innovation.

“We’ll be working with our supply base, and working with all of our constituents to develop the right products for the market. And to be able to leverage that globally is going to be a real plus for us,” Armes noted.

The last thing Armes mentioned was the benefit of the GTC to tire dealers.

“By having [the GTC] here and designing more advance materials, we’re able to reduce our product development time. As a result the dealers benefit,” he said. “We’re constantly refreshing our products getting them out to the market faster and that’s what our dealers are really looking for.”

The facility will be under the leadership of Curt Selhorst, Copper’s new GTC director, and employee 40 scientists and engineers.

Cooper received support from Ohio to build its GTC in the state. A grant of $2.8 million from the Third Frontier Industrial Research and Development Center Program will be paid over the next few years as Cooper fulfills its equipment, development and hiring goals for the center.

“Cooper could have located the Global Technical Center anywhere in the world, and indeed heavily considered its options as the company already has technology capabilities across three continents,” said David Mustine, senior managing director of JobsOhio during the event. “We were committed to understanding and supporting the needs of this great Ohio company — now in its 100th year — as it continues to grow, create jobs and remain competitive in a truly global business.”

This new Global Technical Center is the second investment Cooper has made since it called off its deal with Apollo.  The tiremaker has also committed to making plant upgrades at its Tupelo, Miss., location.

Armes told Tire Review that the tiremaker is considering other investments that fit with its long-term strategy.

Advertisement
In this article:Cooper Tire, GTC