As one would expect, a few hours time brought greater clarity to yesterday’s outright rejection by the Delaware Supreme Court of Cooper Tire & Rubber Co.’s appeal of a lower court ruling that favored suitor Apollo Tyre.

As one would expect, a few hours time brought greater clarity to yesterday’s outright rejection by the Delaware Supreme Court of Cooper Tire & Rubber Co.’s appeal of a lower court ruling that favored suitor Apollo Tyre. 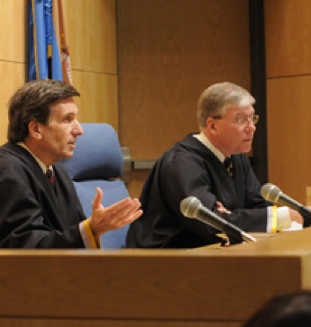 Holland wrote: “The court has concluded that this interlocutory appeal was improvidently accepted.” In short, the court said the state supreme court should never have considered Cooper’s appeal.

The decision was a surprise as it came three days before a scheduled hearing before the state supreme court. Testimony was to begin Dec.19, the date granted by the Supreme Court at Cooper’s request for an expedited hearing.

Apollo’s reaction was one of satisfaction, with an interesting twist at the end of its formal statement. “We are pleased by the decision of the Delaware Supreme Court today, which did more than dismiss Cooper’s appeal – the court decided the appeal was improvidently granted in the first place. Cooper’s litigation strategy to date has done nothing but generate unnecessary cost for its shareholders and for Apollo, and compound the obstacles that Cooper’s situation has created for this merger. Apollo continues to believe in the merits of the combination with Cooper and, notwithstanding Cooper’s stated aim to continue to pursue its misguided legal claims, is committed to finding a sensible way forward, if possible.”

Given that it was the party appealing the court’s decision, Cooper was a bit dismissive of the ruling. “The Delaware Supreme Court today decided not to hear Cooper Tire & Rubber Co.’s interlocutory appeal. Today’s action was not a decision on the merits of the issue on appeal, but instead was a procedural ruling that returns the case to the Delaware Chancery Court. Both Cooper and Apollo will return to the Chancery Court for resolution of the remaining issues in the case. Cooper believes Apollo has breached the merger agreement and we will continue to pursue our legal options as we work to protect the interests of our company and our stockholders.”

While the exact wording of the statement has not been released as yet, Holland’s statement effectively sends the entire court action back to the Delaware Chancery Court, where Judge Sam Glasscock III awaits, presumably with the remainder of his ruling.

Glasscock ruled on Nov. 8 that Apollo did not breach terms of its $2.5 billion deal to buy Cooper, and had not been suffering from “buyer’s remorse” as the reason why it had not year closed its deal to buy Cooper for $35 per share. The judge noted that his was a partial ruling, but before the remainder of his ruling could be revealed, on Nov. 12 Cooper pressed ahead with its appeal to the Delaware Supreme Court.

Glasscock could still rule in Cooper’s favor, but most observers don’t expect that to be the case. The deal must close by Dec. 31 or the entire acquisition is scuppered; Apollo’s financing agreements to support the deal also expire Dec. 31.

In today’s edition of the Findlay Courier, Keith Moore, managing director for MKM Partners in Stamford, Conn., stated plainly his feeling: "To me, Cooper is a dead duck now."

However, Glasscock issued his ruling in a hurry, at Cooper’s request, and he left some claims by Cooper and Apollo unaddressed. Hence, with the case back in his court, Glasscock could still rule in favor of Cooper.

But time is running short. Under terms agreed to by both companies, either side can abandon the deal without penalty if the purchase is not completed by Dec. 31, and if the company walking away is not at fault. If Apollo backs out without a legitimate reason or is to blame for missing the Dec. 31 deadline, it would have to pay Cooper $112.5 million.

"To me, Cooper is a dead duck now," said Keith Moore, managing director and event driven strategist for MKM Partners in Stamford, Conn.

“Moore said Glasscock’s decision last month that Apollo was making the required effort to close the deal put a ‘huge burden’ on Cooper in future court proceedings,” the newspaper reported. “He said last month that Glasscock’s ruling made it ‘highly unlikely’ Cooper would succeed on appeal.”

Another industry analysts contacted by Tire Review said the next real legal battle for Cooper will be over the $112.5 million “reverse breakup fee,” a penalty Apollo would, under the terms of the sale agreement, would be obligated to pay if it walked away from the deal before the close of 2013. Given the nature of the entire situation over the last six months, that analysts suggested Apollo could put up a legitimate fight.

Despite the battle of tiremakers, some still see hope that the deal will get done.

USW Local 207 President Rod Nelson told the Findlay Courier that he wishes the two parties would start bargaining. "I still think there is a possibility they could come to some kind of agreement if they sit down," he said. "Nothing is going to happen through the court system."

"We’re just interested in working for a contract that treats people like an asset and rewards people for their hard work and dedication," he told the newspaper.

“Nelson views Apollo as that kind of company,” the Courier wrote. “’They have the same values that we have had at Cooper in the past.’ In saying that, Nelson excludes Cooper’s current top management, he said.”

Yokohama to Increase prices on Consumer, Commercial Tires
Connect with us