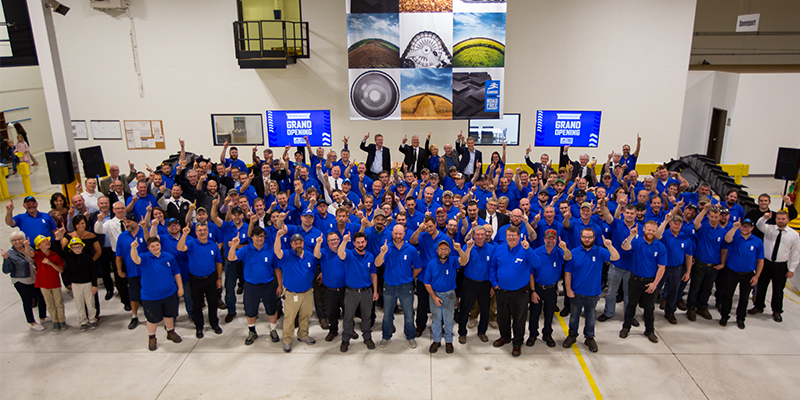 Camso moved its operations in Peosta, Iowa to a larger building allowing it to grow its manufacturing and storage footprint by 85% and increase its production capacity.

Camso employees, along with family, members of the community, customers, partners and the media, were invited to celebrate the expansion of Camso’s new manufacturing facility in Peosta, Iowa.

Camso moved its operations in Peosta to a larger building across the street from its previous location in the city. From the move, the company was able to grow its Peosta manufacturing and storage footprint by 85%, allowing Camso to increase its production capacity.

“This is an achievement we’re proud of,” said Patrick Fortin, Peosta plant director. “The move was done in such a way that we maintained all of Camso’s regular product availability, thus showing our constant commitment to being the best partner for our customers.”

The grand opening event featured an official ribbon cutting, guided tour of the facility and a barbecue. During the event, participants had the chance to walk the state-of-the-art 240,000-square-foot building, see the track system assembly process and meet the people behind some of Camso’s products. The assembly facility, in operation since October 2017, is equipped with machinery and has the same operations from the company’s previous Peosta location.

“To meet the growing demand for track systems and sustain the anticipated growth of the upcoming years, relocation was necessary,” Fortin said.

With an increased production capacity, Camso will have more products on hand and be better able to solidify its market leadership, the company said in a press release. The offices and cafeteria at the plant were built in the spirit of Camso’s brand identity, and assembly operations received a new paint line and additional equipment and machinery. The expansion and growing demand for tracks systems has created new job opportunities for the local workforce as well with several positions coming on board in the near future, Camso said.

Apollo Tyres Increases Use of Green Power for Chennai Facility