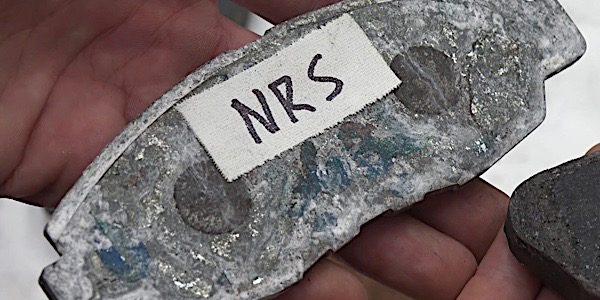 The video titled “What Are The Best Brake Pads? Cheap vs. Expensive Tested!” in one week exceeded more than 1 million views. The video compares five brake pad sets (for the same application) using industry-standard tests at NRS’ certified testing laboratories.

Jason Fenske is the engineer behind Engineering Explained. His channel has earned than 2.4 million subscribers in eight years. The pads selected for the test were the original equipment (OE), NRS Brakes Galvanized brake pads and other aftermarket brake pads representing budget ($20), mid-tier ($40) and upper-tier ($60).

The video also educates viewers on the visual clues to determine if a brake pad is high-quality and able to withstand the harsh environment between caliper and rotor.

In the video, the pads are subjected to SAE J2522 testing sequences. This standard test measures brake pedal pressure, coefficient of friction and temperature. From the data, the amount of brake fade can be determined. The results showed that the budget brake pads required more pedal effort as temperature increased. The OE and NRS Brakes Galvanized brake pads had a more consistent pedal effort number as the heat increased.

“Turns out there are quite dramatic differences,” said Fenske. “The OE and NRS pads make it apparent that by manufacturers setting standards and requirements for their pads, the performance of the pad will be better, but it comes at a higher price point.”

After the SAE J2522 test, the same pads were subject to an environmental chamber that simulates approximately two months of exposure to harsh weather conditions, including salt spray. The budget-, mid- and upper-tier all had visual signs of rust. The OE and NRS Brakes Galvanized pads had no signs of rust. NRS Brakes are galvanized and use mechanical attachment to secure the friction material to the backing plate.

The pads from the corrosion testing were then subjected to shear testing. As a control, new pads were also tested. The least expensive pads and upper-tier pads both sheared with less force than the typical minimum OE requirement.

The last test for the pads was a noise test that subjected the pads to 1430 stops. The budget pads had 69 stops that produce noise louder than 70 decibels, 35 of those stops were above 80-decibels. All of the pads produced noise except the NRS and OE pads, The NRS Brakes Galvanized brake pads had ZERO stops that produced sound levels above 70 decibels.

“I’ve always wondered what’s the actual differences are when I walk into a part store and they offer me different tiers of brake pads,” said Fenske. “It turns out there are huge differences and thanks to the help from the engineers and test equipment from NRS Brakes, we now know.”

This story courtesy of Brake and Front End.

Advertisement
In this article:brakes, NRS Brakes

Epicor Launches Free 'Profit Clinic' for the Aftermarket
Connect with us