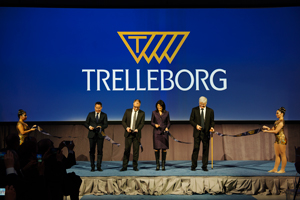 “North America is the largest agricultural market in the world and it is highly attractive for us,” said Paolo Pompei, president of agricultural and forestry tires for Trelleborg. “Demand for extra-large agricultural tires, where Trelleborg is a market leader, is growing in the region. Although we already sell our products in the U.S. and Canada, local production offers considerably more favorable conditions, thus enhancing our competitiveness.”

The 430,000-square-foot facility, located in Spartanburg, S.C., will produce premium radial tires for agricultural machinery and is expected to expand the company’s global reach in the ag tire market, Trelleborg said. The facility is also expected to create about 150 jobs by 2018.

Costing $50 million, the new facility began producing ag tires in late 2015 and will gradually install manufacturing equipment until 2018, in order to cater to market growth, the company said.

“We are now located in a modern facility in a prime location with state-of-the-art equipment designed according to the latest Trelleborg technology standards,” Pompei adds. “This means we will be able to capitalize on existing partnership agreements with major original equipment manufacturers (OEMs) and distributors, while facilitating the transfer of technology from one part of the world to a