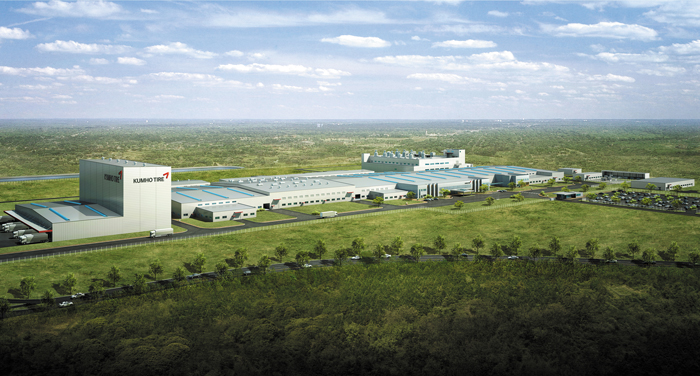 If ever there was a tiremaker seeking a rebirth it might well be Kumho Tire USA Inc. Victim of its own inconsistency, the global economic meltdown and problems with its parent company in South Korea, the North American arm appears to have shaken off all of that and sees better days ahead.

The turn of the calendar will bring a new U.S. tire plant, and a scant 90-minute car ride away will be Kumho’s brand new downtown Atlanta headquarters, which is home to new executives and a lot of new staff. Four new tires will debut for Kumho Tire USA in 2016, and new dealer programs have been set with an eye to sorely needed stability and consistency.

The new Atlanta digs are on the 28th floor of the 51-floor Georgia Pacific building in the heart of downtown. Kumho’s 50-person contingent there will be quite different in attitude and experience; about 80% of headquarters staff are new hires. Everything, save for a few logistics and inside sales posts, has been moved east.

“It was the right time for us to make the move,” said Mayfield.

Kim noted that, “there was a lot of discussion at the headquarters about the location,” and the decision was made in 2014 to make the move.

“There’s an energy that comes with being in that type of environment that impacts all of us, and I think that’s a positive,” Mayfield said.

With the new plant near Macon, Ga., set to fire up in January (full production is slated for mid-2016, he said), “consolidating in this area made a lot of sense.”

“When we have customers here or executives from South Korea come in for meetings, we’ll be able to take them down to see the plant. It’s just 90 minutes away,” Mayfield said.

Ground was broken in May 2008 for what was to be a $225 million state-of-the-art passenger and light truck/SUV tire plant in Bibb County, Ga. By November 2008, the global economic meltdown forced Kumho to mothball the planned 5.7-million-square-foot plant. And then Kumho’s own financial issues, including a multi-year “work out” program to repay debts accumulated by its parent company, kept the program further under wraps.

Finally, in mid-2014, work restarted on the site, and the plant’s price tag increased to $413 million. Phase 1 of production will see an annual capacity of 4 million tires, and Mayfield said there is space and opportunity to expand the facility as business conditions warrant.

With a new plant, new headquarters, new staff and new management, it’s a new Kumho, Mayfield said. “We have the opportunity to create a new culture for Kumho here in the U.S.

“Kumho has gone through some difficult times,” he recounted. “The Kumho Group is a conglomerate that is made up of a lot of different companies in many different businesses. We were very highly leveraged during the financial crisis, so we had to recover from that. And that made investing here very difficult.

“This past year we launched six new products, and that’s great but it’s nuts to do that in one year, actually it was over a five-month span. So our customers had to figure out how to transition from old products to new products, and we had to make that same transition. We finally got new products into the market and we needed to. And those products have been reviewed very well by folks in the industry.

“And we’re going to launch four more new products next year,” he said proudly. “This is not going to stop. The investment is flowing now.”

The transition east left some good people behind, Mayfield admits, “but we’ve had the opportunity to bring a lot of very talented people on board.”

The emphasis going forward is going to be a combination of things, but the chief priority is to shore up relationships with customers, Mayfield said. “Our existing customers, for the most part, have hung with us very well through some challenging times, and we value that loyalty. We need to have our programs, our support pieces, dependable for them so that they know what to expect from us. We cannot pull surprises on them, because for that last number of years that’s what they were experiencing.

“And that’s one of the things we’re committed to changing,” he continued. “If you talk to them today that’s what they have seen. They see the stability, we haven’t done some of the things that we did in the past. We have a program now. We want to be program driven, not deal driven. We have new, cutting edge products so that you can pin a program on those. The new programs and products create that stability.”

Where does Kumho see itself in the market today? “We want to be a strong Tier 2 tire company,” Mayfield said. “Now, we still have a lot of work to do to be there. I don’t think that’s sharing out of school. That’s just the reality of where we are. We think that our brand deserves better. We have a strong OE presence globally, we have good strong marketing programs, we’re the official tire of the NBA, so we’re doing things that would position us as a strong Tier 2.

“Some of the instability and old products have really prevented us from assuming that role,” he confesses, “and that is our problem. Tier 2 is where we want to be and that’s what we are focused on.”

Kumho’s annual dealer meeting is coming this month in St. Lucia. We asked Mayfield what the message to dealers will be.

“Not many people believed that we could do those things, but we did it. And we are committed to continuing on that way,” he said.

“We want to build the business the right way and become a supplier you can depend on so that you don’t have to wonder what’s going to happen next week.”

Mayfield points to Kumho Tire USA president and CEO Harry Choi and “strong leadership from South Korea” as important to the future here. “Harry has really been the driving force to try to change the way Kumho goes to market and he strongly believes in being a program supplier and getting away from the way Kumho did business in the past. His constant message to us is to do things in a way that dealers can depend on and be a supplier that is very important to the dealers.

“We’re heading in the right direction now,” Mayfield believes “We’re in the early stages, but we’re committed to following this through and be the kind of tire supplier that our dealers want us to be.”