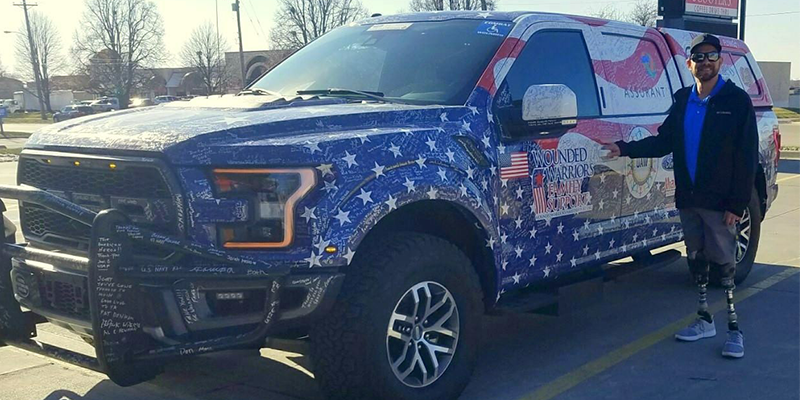 Each year, Wounded Warriors Family Support (WWFS) hits the road for the annual High Five Tour, traveling across the country for months in a mobility-equipped vehicle to thank Americans for their appreciation and support of U.S. military families. At the end of the tour, a deserving veteran and their family are awarded the High Five Tour vehicle to facilitate traveling needs.

The 2018 High Five Tour Raptor was converted for a wheelchair-bound driver and equipped with two stowaway transfer seats, wheelchair crane and a hydraulic bed cover. West’s new Ford F-150 Raptor will go a long way in assisting him and his family in meeting family needs for employment, life support and leisure requirements, SimpleTire said.

“When the U.S. goes to war, so do the families of U.S. military men and women. They also take on huge burdens that can cause enduring stress and trauma, especially when a family member returns wounded or is killed while serving,” said Andy Chalofsky, SimpleTire co-founder and CEO. “We are honored to have the opportunity to help veterans and their families in any way we can and are proud to be a main sponsor of the High Five Tour over the years.”

SimpleTire has been a partner of WWFS since 2016 and contributes annually by donating a portion of its Veterans Day sales to WWFS. Each year, SimpleTire has doubled its donation to help provide more aid and resources to military families.

“The continued support from SimpleTire throughout the years has been amazing and we truly value our partnership,” said Colonel John D. Folsom, USMCR, founder and president of WWFS. “Each of their donations makes a true impact in the lives of military families who have had a member wounded or killed while serving.”