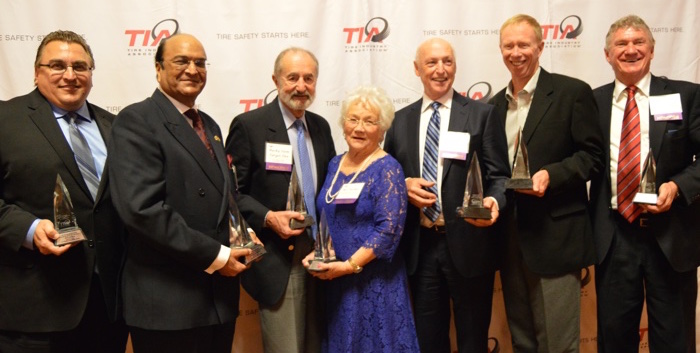 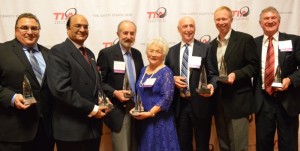 The Tire Industry Honors event was once again a successful evening of celebrating industry veterans. This year, five were inducted into the Tire Industry Hall of Fame and two were honored with the Ed Wagner Leadership Award during the special evening hosted Nov. 2 at the Tropicana Las Vegas.

Kicking of the Honors event was Pete Selleck, chairman and president of Michelin North America. Selleck’s keynote discussed the economy, tire standards worldwide, and keys to a successful tire industry. Selleck reminded attendees that it’s a tire dealer’s responsibility to focus on the consumer’s evolving needs; keep customers safe on the road; and meet responsibilities to our communities and society at large.

Ross Fischer went to work for McCord Auto in Watseka, Ill., in the 1950s. At that time, the business was owned by Verlon McCord. Fischer eventually became McCord’s partner in the business, moving in 1959 to Monticello, where he opened his own McCord Auto shop. He became sole owner of the company in 1964 and went on to expand the operation to 14 locations in Indiana, Illinois, Kansas and Minnesota. He sold the business to Pomp’s Tire Service Inc. in 2010. Fischer was best known in the tire industry for his role in developing a wheel application for Goodyear’s flotation tires, allowing them to be adapted for use in agriculture. He passed away in 2013.

Herman “Hy” Freeman retired from Rema Tip Top North America, where he was the technical services and training manager. He was a pioneer in the early stages of tire service and repair. In the 1960s, he helped to establish the industry recognized standards for permanent tire repair, which are known today as the RMA Recommended Repair Procedures. Freeman was personally involved in developing, testing and providing the radial patch and the vulcanizing insert. He was honored by the industry and his peers with the Industry Pioneer Award at the American Retreaders Conference in 1984.

Paul Hyatt began his career with Superior Tire & Auto when he was 17, working part-time sweeping floors and changing tires. By the age of 21, he was working as a teacher while continuing to work part-time at Superior Tire as a retreader. Five years later, he was offered the opportunity to purchase a small share of the company from his father-in-law, the company founder. He took the offer, left his teaching position, and began his full-time career in the tire business. Hyatt became a partner and vice president of the dealership. He became owner and president in 1981. In 2012, he sold the dealership to two partners who were Superior’s first franchisees. He has remained with the company as chairman. Under his leadership, Superior Tire grew to 16 locations. Hyatt is a past president of TIA, the Tire Dealers Association of Canada and the Ontario Tire Dealers Association. In 1990, he was inducted into the OTDA Hall of Fame.

Dr. Raghupati Singhania is chairman and managing director of JK Tyre & Industries Ltd. in New Delhi, India. The company has a presence in 100 countries, operates nine plants and produces 20 million tires annually. Under Singhania’s leadership, JK Tyre pioneered radial technology in India in 1977. He also has established six state-of-the-art research and development centers, five in India and one in Mexico, to develop technologically advanced products. He played a key role in establishing The Hari Shankar Singhania Elastomer and Tyre Research Institute. Singhania has held leadership roles for numerous industry organizations including the Indian Rubber Manufacturers Association, the Automotive Tyre Manufacturers Association, the Associated Chamber of Commerce and Industry and the Auto Tyres & Tubes Panel for the Government of India. In 2011, he received the “Inspirational Leader of New India” award.

Bucky Stein, founder of Target Tire, was born in 1925 to a father who had a one-man tire repair shop. Bucky went into business with his dad after World War II. He founded Target Tire in 1963 in Jacksonville, N.C., and started his own tire brand, Avalon, in 1970. He sold Target Tire in 2004 and the last of the company’s retail stores was sold in 2011.