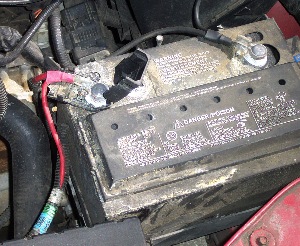 In AGM construction, the electrolyte is completely absorbed in non-woven, spun glass micro-fiber mats that act as separators and insulators between the positive and negative plates. The separators hold the electrolyte in place like a partially saturated sponge all the way to the top of the plates. This configuration allows for maximum utilization of the space available within the battery case, which allows an increase in CCAs or reserve – or both – vs. a flooded battery of the same size. Because the plates are compressed tightly together, sealed and under pressure, the AGM design provides increased insurance against both catastrophic and chronic vibration failures. A polycarbonate-polyester case and plastic cover effectively contain all the corrosive elements so an AGM battery can be mounted in any position except inverted, and can even be mounted inside vehicle passenger compartments.

By comparison, conventional wet-flooded batteries are openly venting explosive oxygen and hydrogen gases into the atmosphere, which may cause an explosion made more hazardous by battery contents laden with sulfuric acid. Also, in any vehicle crash where the battery is crushed, a wet-flooded battery will likely leak or spray sulfuric acid.

AGM batteries, it should be noted, are less tolerant of overcharging, and may require special charging equipment to prevent permanent damage. Acid-starved by design, there is no extra electrolyte to spare when an AGM battery heats up during charging, and no way to replace the fluid once it has boiled off.

AGM and flooded batteries perform similarly in hot climates, but AGMs may be subject to shortened life in higher-temperature environments. At the other extreme, AGM batteries are highly resistant to freezing conditions and offer longer life in colder climates. One manufacturer’s AGMs offer thin plate, pure lead (TPPL) technology, which the company says can work in extreme temperatures, from -40 to 160F. Also, TPPL technology can provide superior CCA and deep-discharge cycling – up to 400 cycles to 80% depth of discharge. TPPL technology allows fast recharging, so deeply discharged batteries can be returned to a high state of charge quickly with today’s large-amperage rated, alternator-equipped cars.

Advertisement
In this article:Buying Tips