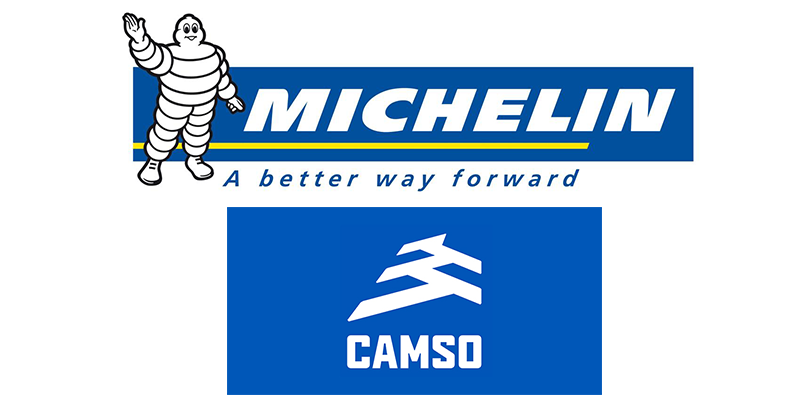 The two companies have entered into an agreement where Michelin will acquire 100% of the Quebec-based Camso Inc. and all its subsidiaries.

Michelin today announced its intention to merge their off-highway transportation business with Camso. The company says it signed an agreement where Michelin will acquire 100% of the Quebec-based Camso Inc. and all its subsidiaries. Michelin is a world-leading tiremaker focused on mobility. Camso is a leader in the design, manufacturing, and distribution of off-road tires, wheels, rubber tracks and undercarriage systems to serve the material handling, construction, agricultural and power sports industries.

Led by a set of common values and a strong tradition of innovation and R&D at both Michelin and Camso, and backed by high-quality teams, the strategic partnership makes the newly created entity the world leader in OTR mobility.

Reporting net sales of US$1 billion, Camso has been designing, manufacturing and marketing OTR mobility solutions since 1982. Camso is a market leader in rubber tracks for farm equipment and snowmobiles, and in solid and bias tires for material handling equipment. It also ranks among the top three players in the construction market, in track and tire solutions for small heavy equipment. Leveraging its technological leadership in tracks and related systems, its competitive manufacturing footprint, particularly in Sri Lanka, and strong customer awareness of its CAMSO and SOLIDEAL brands, Camso has demonstrated its ability to grow rapidly, expanding at an average pace of 7% per year since 2012.

By joining forces with Camso, Michelin will create the world’s number one OTR market player, headquartered in Quebec. The business will benefit from the expertise of Camso’s management team and Michelin’s long-standing presence in Canada, both in Laval, Quebec and in Nova Scotia. As world leader, the new entity will represent more than double the net sales of Camso, supported by 26 plants and approximately 12,000 employees and will benefit from sustainably dynamic markets.

Thanks to the complementary positioning of the two companies’ product and service offerings, the transaction is expected to deliver the following benefits:

In marketing and sales:
In the agricultural market, the creation of a unique player providing its customers with a comprehensive range of premium radial tires and tracks.
In the construction market, Camso will reinforce Michelin’s offering with its bias tires and tracks offers.
In the material handling equipment market, Michelin will leverage Camso’s renowned SOLIDEAL and CAMSO brands to become the market leader in solid tires.
The deployment of the new entity’s offer will be accelerated by the complementarity of both Michelin and Camso’s distribution networks.

In technology:
Cooperation between Camso and Michelin researchers will bolster the Group’s innovation capacity in tracks and airless tires. Cross-fertilization of R&D expertise will enable the teams to consolidate the Group’s position as a global technological leader in support of sustainable mobility, as Michelin’s headway in terms of long-lasting performance of tires is a differentiating factor and a key strength for reducing its environmental footprint. In addition, Michelin’s technological breakthroughs in reducing soil compaction while maintaining superior traction, for example, will contribute to the products that Camso develops.

In manufacturing:
A strong manufacturing presence of Camso in emerging markets, particularly in Sri Lanka and Vietnam.

Jean-Dominique Senard, Chief Executive Officer of the Michelin group, said: “Michelin and Camso have many values in common. This acquisition is a wonderful mutual opportunity. Michelin will benefit from all of Camso’s skills in the off-the-road mobility markets and Camso from the full range of Michelin’s expertise in the specialty markets.”

“Joining up with Michelin’s off-the-road teams is a fantastic opportunity for Camso because of the similarity of our cultures as well as our growth potential,” said Pierre Marcouiller, Executive Chairman of Camso. “Camso will achieve its ambition to become the global off-the-road market leader and will contribute its dynamic teams, its technical and manufacturing assets and its customer-focused mindset. The transaction has received the backing of all Camso’s shareholders.”

Through studies and discussions with Camso, Michelin has identified significant opportunities to increase sales and reduce costs, thereby unlocking up to US$55 million in synergies by 2021. After obtaining the customary approvals, Michelin will acquire Camso for US$1.45 billion, corresponding to an enterprise value of US$1.7 billion, i.e., a multiple of 8.3 times EBITDA* after synergies. The transaction will not impact the Group’s robust financial position.

As part of the transaction, Michelin has made the following commitments:

The OTR division’s decision-making center will be based at Camso’s headquarters in Magog. The management teams, including the top executive, will work out of the Magog office.
Headcount at Camso headquarters (300 employees, of which 100 in R&D) will remain stable, and existing R&D operations and production jobs in Quebec will be maintained.
The new skill sets required to oversee this global business, and the anticipated growth in the division’s net sales, will lead to the creation of new high-quality jobs in the Magog region in the coming years.

With this transaction, the Michelin Group is confirming its strategic commitment to expanding in the tires and services domains while rolling out its strategy in materials and distribution. Michelin also indicates that, following a thorough analysis, the synergies expected to result from the Fenner acquisition have been revised upward, to £60 million from the initially announced £30 million.

Later today, Jean-Dominique Senard, CEO of the Michelin Group and Pierre Marcouiller, executive chairman of the board of directors of Camso Inc. will present the association between the two companies to create a world-leader for “off-the-road” mobility, later today in a press conference.

Article to be updated as more information is provided.