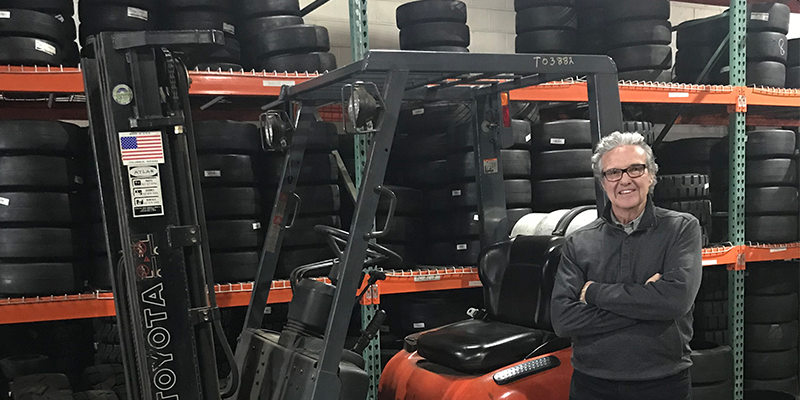 Metro Industrial Tire owner Kevin Clarke describes how his business has been able to make a profit in a niche area of the tire industry: solid tires.

In a $151 billion dollar industry, off-the-road (OTR) tires make up just 11% of the overall market. Narrow further and you find materials-handling tires, an important yet often overlooked part of the OTR mix. Narrow further yet and you find Metro Industrial Tire, with two locations outside of Chicago, building a solid business based mostly on solid tires.

When Metro Tire owner Kevin Clarke started in the tire industry 40 years ago, he cut his teeth on solid tires with an industry icon as his first boss and early mentor.

After his father set him up for a job interview at Dave Bloom Tire, an industrial tire company, he went reluctantly.

“[My father] said, ‘go talk to this guy; they need a salesman,’” Clarke says. “So, I go to this horrible area in Chicago, and here’s this building. If it wasn’t for my dad saying I had to go there, I probably never would have gone in. So I go in, and I get the job.”

Working in sales for the industrial tire company meant working with its owner, Mr. Dave Bloom himself.

“This fellow, Dave Bloom, who owned the company, was a unique character – let me just say it that way,” Clarke said. “He was a very unique personality, where he would drive you crazy and push you, and I didn’t know any better, so I just did everything he told me.”

Part of pushing the then-rookie Clarke was mentoring him in negotiating with challenging customers. While Clarke was young and reluctant to engage in difficult conversations, Bloom forced him out of his comfort zone. The result was his fast success.

Two years later, Clarke met his future wife when she came to work for the business.

“We met, and I said okay, I’d better get a real job. We’re going to get married,” he said. “So, I went to Dave Bloom, and I said I’m going to leave. He said no, no, no, you can’t. I was their top salesman. Then he asked what would it take to make me stay. I [told him I] need at least this [much money to stay]. He said okay and he gave me a pay raise. Well, since that happened, I tried to leave like three times, maybe four times, and he’d always give me a big raise. So, it seemed it was working out okay, so I stayed for 13 years.”

At age 34, Clarke was finally ready to go out on his own. It was then that he partnered with Joe Hoobyar to open a second location of Hoobyar’s Metro Tire, this one on the north side of Chicago.

“Joe bought a Goodyear store, and he started up Metro,” Clark said. “They were doing some industrial tire business. I thought on the north side of Chicago, there’s only one company that does forklift tires. Everyone else comes way from the south side to the north side to do tire business. So I said to Joe, ‘why don’t you be my partner and I’ll open up north?’ And here I am, 40 years later.”

Today the company specializes in tires for forklifts and skid steer equipment, plus rubber tracks. When asked why they decided to pursue such a specific niche as materials handling, Clarke explained that there wasn’t as much competition in Chicago when they started out, so they were able to gain market share along with a strong client base.

“At the other end of it, like truck tires and things like that, there are a million people in it, and the margins aren’t that great,” he said. “[With materials handling tires], it’s a whole different type of business. You need different equipment. You need different people. The forklift business is, I guess, simpler, in a sense.” 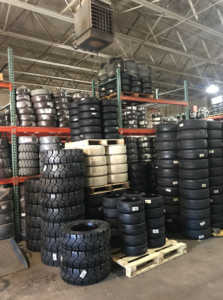 Tires stacked in a warehouse at Metro Industrial Tire in Chicago.

To manage the volume of forklift tire replacement, Metro Industrial has a total of six service trucks to handle their many press-on tire installations. And after proving themselves as a leader in such a niche business, today the forklift equipment dealerships in the Chicagoland area send their tire work to Metro.

Getting started in the materials handling business can be expensive. Specialized press equipment is required, which is a capital-intensive investment. Plus, according to Clarke, installing solid tires is hard work and not something a lot of traditional tire dealers want to be bothered with.

That said, they still have competition.

“We have a very strong competitor who’s been around as long as we’ve been, and between the two of us, we really do take care of the city,” Clarke said. “There are a couple of [smaller players] who get into it and make your life miserable by just lowering pricing and everything else. But when it comes to the solid tires in Chicago, we’re the biggest dealer by far.”

When it comes to finding new technicians and employees, Clarke said they look for people with mechanical aptitude, such as auto mechanics or people who have experience working at forklift companies or as forklift techs. And unlike technicians at traditional tire dealerships, Metro Industrial supplies employees with their tools and all they need for the job.

“To train them, we basically go through a pretty extensive training program,” Clarke said. “There are videos out there on how to [work with materials handling tires]. We have them watch those. And we have them work in every aspect of our business. Because we’ve been at it so long, we have an experienced guy – experienced employees on-site – who help teach them. We never even send a tech out into the field until [he has a few weeks under his belt]. He has to have been working in our shop and then out on the truck for about 30 days or more before we send him out. Even then we’re careful. When we send him out, we sent him out on little easy jobs just to see how he does.”

With such a strong reputation in the Chicago area, Clarke works hard to maintain a high level of trust with customers. Similar to the commercial tire business, a customer with a piece of materials handling equipment that’s down for service often results in both headaches and lost revenue, so Clarke and his team do their best to make sure the customers are delighted.

“It’s like anything,” he says. “If you’ve ever had your car worked on, you bring it into the shop, and you leave, and something’s not right, right away it’s ‘Oh, the last guy who did it was that guy who worked on my car.’ It’s the same with forklifts. You work on a guy’s forklift, and if you do something wrong, the guy’s right on the phone in an instant. It might be completely unrelated to anything you even did with the forklift, but they’re going to blame it on you because you’re the last one to touch it. So, we’re real careful. We’re also really safety conscious. We really want to teach [our technicians] all the proper ways to do everything, so they don’t get hurt on the job, so they don’t ruin a forklift or do anything like that.”

According to Clarke, the secret to his success is a combination of fair product, fair pricing and the fair treatment of customers.

“We completely take care of them service wise – and it’s really all about the service,” Clarke says. “Fortunately, we’ve done really well.”