The app will offer several features, including a tire search and quote request, a list of dealership locations, and coupons or specials. 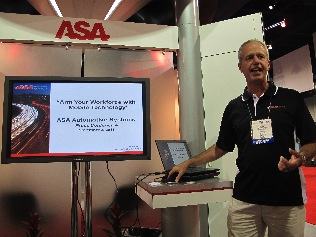 The technology, which includes software for rugged tablets, carside and inventory scanning, and iPads, is designed to improve productivity and customer service, as well as increase traffic flow to a dealer’s business, the company said.

“We are continuing to arm dealers with applications to meet their needs wherever they are and to allow them to be more productive and efficient,” ASA president Ken Halle said at the company’s booth Wednesday.

The iPhone app, which will be released by the end of the year, is actually a customizable app for dealers to purchase and offer to their customers at no charge. Currently in development, the app will offer several features, including a tire search and quote request, a list of dealership locations, and coupons or specials.

Once dealers purchase the app, they can customize it with their logo as the icon and their company name as the title. ASA plans to add more functionality after the initial launch of the app.