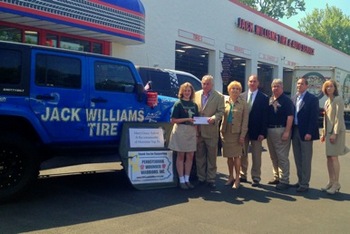 Jack Williams Tire enlisted the help of Mary Grace Eckert, a sixth grader at St. Jude School in Mountain Top, to set up coin collection banks at the Jack Williams Tire locations in Wilkes-Barre, Hazelton and Kingston, in support of the PAWW. Since 2012, Eckert has been actively involved in the PAWW organization and has raised almost $5,000 to date for wounded veterans in the state, said the company. She’s raised these funds through coin collection tins and selling holiday greeting cards across local businesses in the area.

“There’s no way that I’m going to stop working on this project,” said Eckert. “I want everything to go to the soldiers.”

Advertisement
In this article:Jack Williams Tire