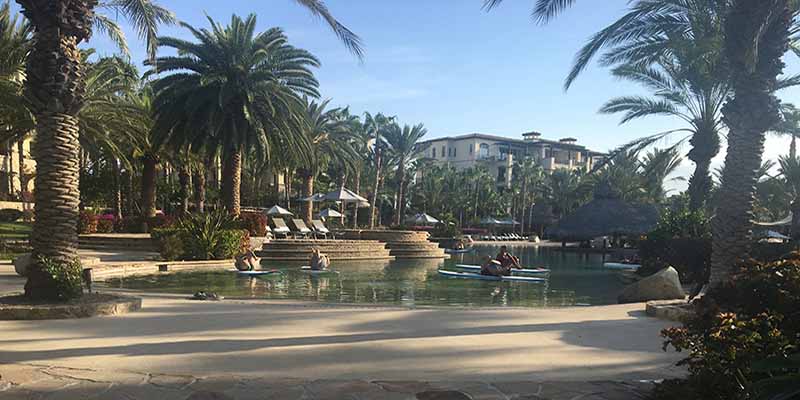 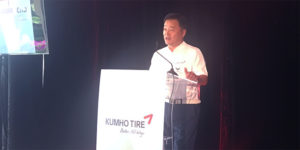 Kumho Tire USA CEO and President Harry Choi greets the dealers and distributors gathered at the 2017 Kumho Tire Dealer Meeting at the Esperanza Resort in Cabo San Lucas in Mexico.

Against a backdrop of waves crashing against the rugged coastline along the Sea of Cortez, more than 30 tire dealers and distributors, along with their guests, gathered at the Esperanza Resort, an intimate paradise in sunny Cabos San Lucas in Mexico, to take part in Kumho Tire USA’s 2017 Dealer Meeting. Highlights from the Dec. 7th meeting include a new brand tagline, a glimpse of new products to launch in 2018, added incentives for the already improved Premium FUEL rewards program, innovative marketing tactics, and a commitment to the maintain the brand’s momentum for consistency, stability and dependability in serving its dealers.

2017 has been a busy year for the tiremaker. While the global ownership drama played out in South Korea, its U.S. operations took a “business as usual” approach, resulting in double-digit growth in North America. Notably, of the brand’s products, Solus TA11 saw a 74.6% increase in sales, the Crugen KL33 a 67.9% increase, and the Crugen HT51 an impressive 98.2% increase in 2017 sales over 2016.

Like its products, the Kumho brand continues to innovate, optimize and evolve. Even the company tagline is changing, from “Better. All-Ways” to “Imagine, A Better Tomorrow,” with the intention of reaching consumers on a more personal level.

After multiple product launches in 2015 and 2016, the company intentionally “pumped the brakes” to give its dealers a chance to catch up.  But that product pause is soon to come to an end, according to Jim Mayfield, executive vice president North America for Kumho Tire USA. In 2018, the company plans to introduce three new tire products, taking a more measured, strategic approach to product introductions moving forward with plans to introduce two to three new products each year, retiring other products at the end of their lifecycle.

Kumho products soon to release for the North American marketplace include:

The Crugen HP71, an all-season tire designed for CUVs and SUVs, will be replacing the KL33. The tire features new compounding and design to enhance both wear and cold-weather/snow performance.  Details include a new luxury-designed patterned sidewall. Releasing in Q4 2018, the symmetric-pattern radial will be available in 53 sizes, from 16-in to 22-in. rim diameters and H and V speed ratings.

The Ecsta PA51, a UHP all-season tire, will be launched in Q3 2018. Like the Crugen HP71, the tire has been designed to enhance snow and mileage performance. Combining the current HP A/S and UHP A/S for easier product recognition and knowledge, plus simpler stocking at the retail level, the new PA51 will be replacing the Ecsta 4X II in phase one of its launch with further line expansion to replace PA31 in phase two.  The sidewall design features a new racing theme look. The asymmetric radial will be available in 64 sizes, in rim diameters ranging from 15-in. to 21-in. in V, W and Y speed ratings.

“The PA51 line will incorporate a much broader range of sizes, and speed ratings and will eliminate two lines that we have now,” explains Mayfield to the dealers gathered. “Here again, one of the key targets is improved snow traction. All of our testing has shown substantial improvements there and we’re anxious to have this product in market.”

The third tire announced by Kumho to launch in 2018 is the KLD 11e, an all-new drive tire primarily for long-distance commercial drivers and line-haul applications which could also be used for some regional applications. The tire will be SmartWay Certified and features: enhanced mileage and low rolling resistance; increased durability with uniform wear characteristics; optimized grooves for improved traction in all weather conditions, and increased endurance. The KLD 11e is expected to launch in Q2 2018.

Also discussed at the dealer meeting were enhancements to the Premium FUEL rewards program for 2018, including big increases in store points available across all three levels (more than 6,000 points compared to 2017), the availability of items like UHD televisions and GoPros to use for marketing incentives, plus $5 added “Hi Octane” incentives for 18-inch and up fitments.

In 2017 the company also launched a slick new consumer website and developed new reporting tools to give its customers the ability to get data on their sales progress in real time. 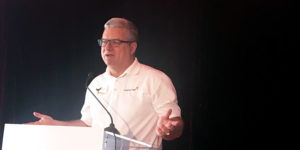 Jim Mayfield, executive vice president of sales for Kumho Tire North America, outlines the effectiveness of the company’s focus on consistency, stability and dependability, three qualities that contributed to the brand’s double digit growth in North America in 2017.

Brian Gallagher, head of marketing for Kumho Tire USA, outlined an innovative approach the company has taken to increase brand awareness across digital and social channels by leveraging the company’s existing relationship as the official tire of NBA with greater sponsorship in specific markets, in addition to niche motor sports sponsorships. Through unique and shareable video content on NBA.com, YouTube and other channels in 2017, Kumho offered popular lifestyle, off-the-court glimpses at professional athletes, like former Boston Celtic Isaiah Thomas, Celtic Kelly Olynyk, Golden State Warriors Shawn Livingston and Marvin Jones, Jr., of the Detroit Lions, to increase brand reach. They plan to continue this in 2018, expanding the concept further.

Gallagher added that the company will continue to develop innovative tactics to increase brand awareness, with several high-profile partnerships in the final stages and soon to be announced. He said the company also plans to work directly with its dealers and distributors to create marketing promotions specifically tailored to each unique region to support continued dealer growth.

The exclusive Kumho Tire USA event began Dec. 6 and comes to a close on Dec. 10. 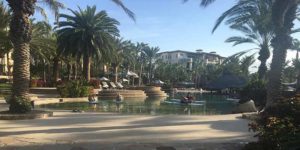 Inside the Kumho Dealer Meeting: A Better Tomorrow