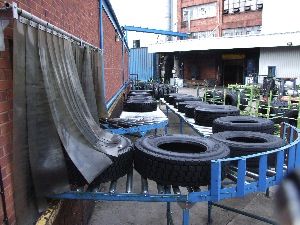 The company reportedly met with unions and employee representatives in the few days and says the decision will result in all full-time employees being guaranteed a full 42-hour week with immediate effect.

Goodyear Wolverhampton changed shift patterns and moved to reduced hours, dropping the Guaranteed Working Week in December 2008, during the early stages of the economic downturn. At the time this was said to be in response to severely reduced demand for car and truck tires.

“In December 2008, this approach allowed us to balance our inventories in line with demand while at the same time minimizing disruption to the work schedule for our associates. Our teams did a superb job in managing shift staffing in a way that ensured that lay-offs were kept to the lowest possible level,” production director Ian Taylor stated.

Goodyear manufactures rubber compound and retreaded truck tires at the Bushbury Lane site, which employs more than 300 people. The site’s retreading plant has the capacity to produce 100,000 retreads a year at full production. In 2009, the company invested in new technology which was used in the launch of the Goodyear TreadMax truck tire range, which is now used by leading fleets across Europe. (Tyres & Accessories)

Goodyear Wolverhampton Back to Regular Levels