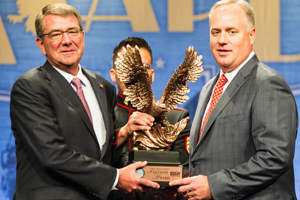 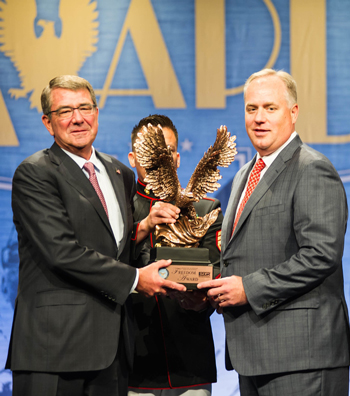 During a ceremony at the Pentagon in Washington, D.C., on Aug. 26, Goodyear Tire & Rubber Co. was recognized for its military support with the 2016 Secretary of Defense Employer Support Freedom Award. The Freedom Award is the nation’s highest honor awarded to employers for their exceptional support of Guard and Reserve employees.

“To be chosen as one of 15 recipients out of more than 2,400 organizations that were nominated is a great honor,” said Steve McClellan, president of Goodyear Americas. “Although Goodyear is being recognized for our efforts as a company to support our troops and honor veterans, we believe that what we receive back from our veteran associates is truly invaluable. The dedication, work ethic, perspective and ingenuity that they bring to our offices, plants and retail stores every day is the real reward for Goodyear.”

Goodyear is the first ever tire and rubber industry manufacturer to be honored with the Freedom Award.

“I nominated Goodyear for the Freedom Award because I’ve experienced firsthand the heartwarming and outstanding support they’re willing to give veterans, guardsman and reservists,” said Chris Wozniak, engineering manager at Goodyear Innovation Center Manufacturing and a Lt. Cmdr. in the U.S. Navy Reservist. “The thread of patriotism runs deep throughout all facets of the organization, whether it’s with new hires, transitioning veterans or even associates who have never served but are passionate about supporting our troops.”

Goodyear’s military support includes hiring 1,000 Guard, Reserve and veteran employees from 2011-2014 and renewing that commitment in 2015; its annual “Support Our Troops” campaign; and supporting associate veterans, reservists and guardsmen and women.