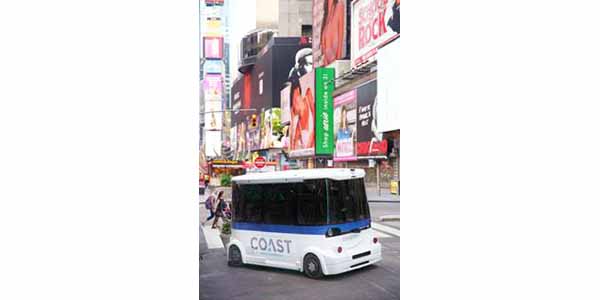 In Times Square in New York, a low-speed self-driving shuttle from Coast Autonomous was demonstrated this week. 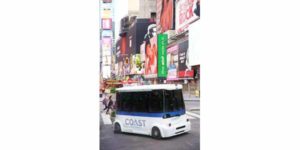 In crowded Times Square (on Broadway, between 47th and 48th) in New York, a self-driving P-1 shuttle from Coast Autonomous was demonstrated this week along an approximately 150-yard course for participants to ride and learn more about autonomous vehicles to come.

“This represents an evolutionary moment in urban transportation,” says Pierre Lefevre, inventor of the first low speed autonomous shuttle and Coast’s CTO.  “I’m confident that self-driving shuttles will fundamentally enhance the quality of life in cities. They will allow for more developments exactly like the Broadway pedestrian plaza, here at Times Square, that give the city back to the people.  They will also improve the way individuals travel around cities. Imagine what it was like when New Yorker’s saw the first subway demonstrated in Manhattan – this is similarly significant.”

Around the globe, densely populated urban centers are notorious for generating damaging noise levels and becoming impassable because of gridlock. Such environments are ideally suited to low-speed, autonomous shuttles, which have the potential to dramatically reduce traffic volume and noise, pollution, and parked vehicles in favor of pedestrian walkways and more numerous green spaces.

The Coast P-1 shuttle is a bi-directional, self-driving vehicle that is designed to operate in pedestrian areas, or in low speed mixed traffic (up to 20mph).  The P-1 can travel at higher speeds on a dedicated lane.  With no pedals or steering wheel, the vehicle operates on a network of predefined routes and can also be called using a smartphone “app”. Electric wheel hub motors provide a smooth ride and allow for a larger floor plan within the vehicle as there are no axels.  The vehicle comfortably accommodates 8 seated and 4 standing, but with fewer seats could carry up to 20 passengers.  The P-1 chassis can also be configured as a delivery vehicle.

In addition to cities, other environments that could be ideally suited to driverless shuttles like the P-1 include college campuses, airports, business parks, vacation resorts, and theme parks.