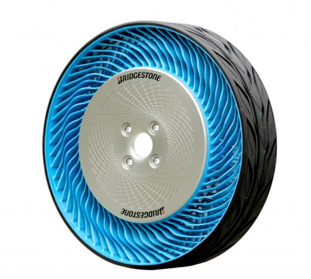 The spokes of the tire – made of thermoplastic resin – stretch along the inner sides of the tires and support the weight of the vehicle. Along with the rubber in the tread portion, the materials used in the tires are recyclable, contributing to the efficient use of resources.

Further, by pursuing extremely low rolling resistance and contributing to reductions in CO2 emissions through use of proprietary technologies, Bridgestone believes it is possible to achieve even higher levels of environmental friendliness and safety, and is pursuing this technological development with the aim of achieving a “cradle to cradle” process that maximizes the cyclical use of resources from worn tires into new tires and the use of recyclable resources.

Bridgestone details the new technologies present in the new concept as follows:

2) Pursuing low rolling resistance to reduce CO2 emissions. “About 90% of energy loss from tire rolling resistance comes from repeated changes in the shape of tires as they roll,” Bridgestone said. “In the second generation of airless tires, Bridgestone has succeeded in making a significant reduction in energy loss by using proprietary materials technologies and simplifying the structure of the tires. As a result, these air free concept tires have achieved the same level of low rolling resistance as our pneumatic fuel-efficient tires, making possible a contribution to reductions in CO2 emissions.” (Tyres & Accessories)