Vogue Tyre & Rubber Co. be­gan in 1914 when Harry How­er, a chauffeur in Chic­ago, developed the white wall tire. To say that the rest is history would be an oversimplification – less than 1% of companies even make it to 100 years, noted Vogue Tyre president Greg Hathcock at the company’s 100-year anniversary celebration in downtown Chicago. 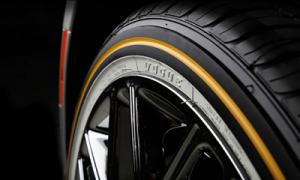 The tire and wheel company is an anomaly but would never describe itself that way. The company describes itself as being in a people business and spent much of the celebration remembering the people of Vogue, namely founder Hower, and key leaders such as Lloyd Dodson, Warren Dodson, Joel Fischer and Garry Goyak.

“We understand that without those people, we wouldn’t be here today. All four of those men all contributed significantly, in their own way and time, to the company and where it’s at today,” said Hathcock.

Recognizing those pivotal people and tell­ing their stories, Hathcock recalled Vogue’s century of history to guests and current employees attending the event.

Hower laid the groundwork in 1914, but it wasn’t until 1927 that the company was really started. That was the year that Warren Dodson visited Chicago on a vacation and noticed a Vogue tire on a car. His fascination was piqued, so he sought out Hower and negotiated the distribution rights to the Vogue line in 11 Western states. With tires now in 1930s Hollywood, the Vogue brand became closely associated with movie stars and others of pro­minence.

“From the start, originality has been our cornerstone,” said Hathcock. “Vogue was for people who wanted their car to stand out and be unique.”
World War II was a challenging time for everyone in the tire industry. The government took control of all natural rubber for the war effort, tiremakers struggled with early versions of synthetic rubber, and new tires and retreads were rationed. The bus­iness struggled, and, as a result, in 1942 Hower sold Vogue Tyre to Dodson for $50,000.

“He saw an opportunity to take something, and get through that hard time and build it up for the future,” said Hathcock.

The company blossomed and grew under Dodson’s leadership. Some of that as due to a 1938 deal he cut with the then Kelly-Springfield Tire Co. to produce the tires. Prior to that, the company had worked with smaller producers such as Falls Rubber and Wheatley Rubber. The agreement with Kelly-Springfield would ultimately last more than 70 years until the early 2000s when Goodyear (which had acquired Kelly-Springfield during that period) began to phase out its private brand business.

Having one tire producer allowed Vogue to build its brand with consistent quality and high-end R&D and design help, which led to a number of unique and memorable tires.

“They had lots of resources and engineering and it was a unique relationship for them, too,” said Hathcock. “They enjoyed it, it was a fun account. The engineers liked it because they got to do different things and take on different challenges.”

Those challenges included products that went beyond whitewalls. In the 1960s, Vogue introduced the Twin Air Life Preserver, a run-flat concept that featured a hard rubber tire inside of a pneumatic tire. In the 1980s, Vogue used aramid, also known as Kevlar, the material used in bullet-proof vests, in its tread for the Vogue Aramid Radial Tyre.

“As the market changed, and higher speed ratings came out, we had a Z-rated White/Gold tire in the early 1990s,” said Hathcock. “We called it the Twin Tread.”

In March 1954, Joel Fischer, current chairman of the board and CEO, first joined Vogue Tyre. In a letter written to commemorate the 100-year anniversary, Fischer recounted his early years at the company, and reminded that when he was hired on Vogue had all of nine employees.

“We were really a retail store with only about a dozen car dealer customers. Sales were $30,000 per month and we were losing $3,000 per month,” Fischer wrote.

“I traveled every other week across the eastern part of the country trying to establish dealers.  I kept a log on every tire and tube I sold and never quit for the day until I sold at least seven tires, which covered my expenses. Over time, we were able to establish a dealer network and build the business.”

“There isn’t a dealer around today that doesn’t remember Fischer and how he was always professional. To this day, that culture is still being instilled in this company,” said Kevin Goyak, executive vice president of Vogue Tyre.

The tires have not lost that allure. This past year, singer Kid Rock incorporated Vogue tires into a custom-designed Cadillac that he built with West Coast Customs. Hip hop duo Mackelmore and Ryan Lewis filmed the music video for their song “White Walls” – featuring tons of Cadillacs and Vogue whitewall tires – at Vogue Tyre’s Los Angeles warehouse.

“Because of the sidewall design, there’s a lot more hand-building involved in our tires,” said Hathcock. “That’s what makes them special.”
For that reason, when Goodyear starting phasing out its private label business, Vogue searched diligently for a new production partner that would uphold the quality and performance that Vogue customers have grown to expect.

“Goodyear came to us in-person and asked how we could work together and make sure that everyone came out of the transition healthy and successful,” said Hathcock. “They gave us plenty of lead time and they couldn’t have been done things in a better way. It was a 72-year relationship – that’s hard to do.”

“The key was to find a good plant and the right plant for our business. Sailun was a great choice. They’ve been very responsive and the quality has been really good,” said Hathcock. “They’re a unique factory and if they were located in the U.S., we’d want to work with them, too.”

Regarding the potential for another round of additional tariffs on imported China-produced consu­mer tires, Vogue is waiting to see how it plays out. “As long as you have a business partner that wants both parties to be successful, you can work through challenges. That’s how we’re approaching this,” said Hathcock.

Besides the unknown challenge of the expected tariff, Hathcock and Goyak believe that Vogue’s biggest challenge is continuing the Vogue legacy.
“We’re just coming out of the so-called Great Recession and, if you look at the spaces Vogue is in, the car business took a big hit. We chan­g­ed factories and repositioned Vogue in terms of its products with the introduction of Signature V products and different wheels,” said Hathcock. “It’s been challenging but everyone has worked hard towards the same goal.”

Both Hathcock and Goyak believe that at the end of the day, in order to be successful over another century, Vogue will have to rely on its employees and its reputation.

“As much as it’s about the products, it’s about the people. Everyone who works for Vogue Tyre couldn’t be replaced by someone else,” said Goyak. “They all contribute to the success of the company. We’ll continue to focus on products that are unique and make sense for our customers, but the people who work here is what this company is built on.”

Vogue Tyre ended its 100-year celebration presentation with a slide­show featuring all 100 of its current employees, thanking them for their years at the company.

“That Vogue is celebrating its 100th anniversary this weekend is proof of what I have always known: Vogue has always had the most dedicated, talented, professional, hard-working and loyal employees in the industry,” concluded Fischer in his note.

“Be they in sales, accounting, warehousing, management or the custom centers, our fantastic people have always been Vogue’s greatest asset.”

Advertisement
In this article:Vogue Tyre

Rolling with the Numbers: Tire Dealers Tell Us How They’re Dealing with Price Increases