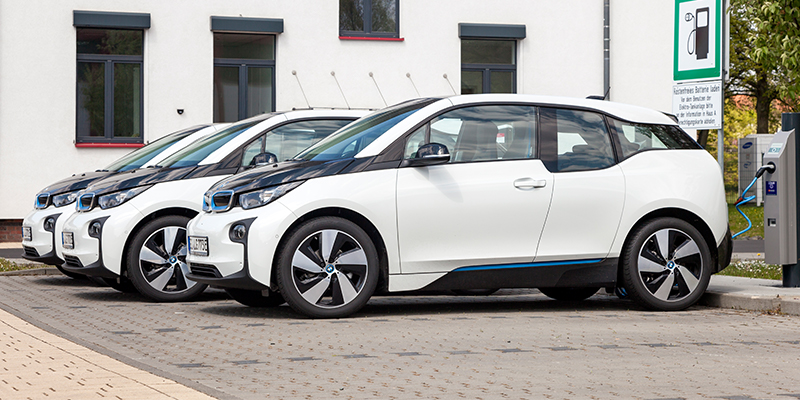 Autonomous driving is a game-changing opportunity for the automotive industry as well as its greatest challenge.

BMW’s i3 electric vehicle, shown here at a charging station in Germany, is equipped with taller and thinner tires with larger rims. The Bridgestone Ecopia EP600 was co-designed with BMW to have a long, narrow contact patch that makes up for the compromised width.

Autonomous driving is a game-changing opportunity for the automotive industry as well as its greatest challenge. Over 50 million injuries and 1 million deaths occur on the world’s roads every year. Over 80% of all collisions involve human contribution/input; over 50% of these are caused by direct human errors. Autonomous driving (AD) technology could decrease these numbers significantly, having an enormous impact on society at large and reinventing the auto industry at the same time.

Safety systems have evolved significantly over recent decades and, in particular, the last few years. The AD area is expected to grow rapidly from a current low level to a value over $30 billion in 2021 and over $80 billion in 2026, according to the Smithers Rapra market report “The Future of Autonomous Vehicles and the Impact on Tire Markets to 2026.” The rapid development of Advanced Driver Assistance Systems (ADAS) and AD are contributing to increased safety and customer value, as well as benefiting the environment and society.

To maintain pace with this trend, most major automotive players are investing extensively in a wide range of emerging technologies including sensors, mapping, redundant safety systems, data and communication and ride-hailing services to name a few. Tires are also a crucial area of development related to autonomous vehicles. If not managed correctly deflation of tires on an AD vehicle could have fatal consequences.

Several factors, therefore, need to be carefully considered in developing tires for AD vehicles, including: the materials and structural build-up; use of smart diagnostics sensors that detect the condition of the tires and the road; run-flat technology, and advanced safety controls to handle a rapid deflation situation.

There is currently extensive activity among the major premium tire suppliers (e.g. Goodyear, Continental and Pirelli) developing tires specifically adapted for AD. The beginning of these technologies is showing up in the market while they are being explored more in depth with concept tires. Continental’s CEO Elmar Degenhart explains: “Tires will become a key part of our sensor network in the car. On this basis, we are working on a complete system for anticipatory driving that is able to learn.”

The incremental but accelerating transformation of motor vehicle fleets to autonomous operation has enormous implications for tires, which are important parts of the vehicle since they have physical contact with the road. The proper design and operation of the tire will be critical to safe and efficient operation of autonomous vehicles, and the overall intelligent/connected transportation system.

Most near-term tire industry forecasts do not adequately portray the degree of change that will occur as automation levels increase. In the short term, despite slow overall market growth, some dramatic shifts are taking place in the tire segment and in product mix. In the immediate future in the more mature markets, the traditional low-premium passenger radial segment is in decline, losing ground to high-performance radials (H-rated and above) as OEMs continue to differentiate their vehicles with larger and faster tires.

Tiremakers are working to shift the mix to higher value, high-performing products reinforced by consumer preferences. Light truck tires are also a source of considerable growth potential, based on consumer preference in the North American market for large SUVs and full-size pickups. The truck trend is being greatly encouraged by current low fuel costs and will be consequential for the replacement tire market over the next few years, even if oil prices rebound.

Looking to 2026, when autonomous vehicles will be far more prevalent and advanced, trends in tires will include greater standardization and compatibility between tires and vehicles with narrower and taller tires becoming the norm for fuel efficiency and other AV needs.

The Smithers Rapra market report on “The Future of Autonomous Vehicles and the Impact on Tire Markets to 2026” says while enthusiast drivers today prefer high-performance tires with speed ratings, as autonomous vehicles grow in marketshare these preferences will become less important. In terms of vehicle requirements, by 2026 all new vehicles and all autonomous vehicles will be equipped with tire pressure management systems (TPMS). Run-flat tires, which are currently available in the market on some new models, will be mandated on all autonomous vehicles. Improved versions of today’s run-flat tires will be more aerodynamic and lighter weight to extend vehicle battery life.

Even before prospects for autonomous vehicles came to the forefront, environmental agreements, laws and regulations aimed at reducing CO2 emissions and increasing fuel economy have been transforming the tire industry. These regulations are hastening the search for an alternative, sustainable raw materials (with conventional ones subject to supply and pricing issues), and adding urgency to the pursuit of new vehicle and tire technologies that reduce energy usage. Future regulations that raise the cost of energy, especially but not only that of fossil fuels, could have negative effects on economic growth as well as driving behaviors.

Meanwhile, spreading regulations concerning tire labeling seem to be favorable overall, with the label emerging as a possibly valuable education, differentiation and selling tool, particularly as tires become more capable and mission critical. The main downside here would be if labeling policies remain fragmented by country/region, which would make testing more onerous for tiremakers and make it more difficult to profitably bring innovations to market.

Regulations also play a role in the adoption of tire technologies that are seen as critical to safe vehicle autonomous operation, particularly with regard to TPMS and run-flat tires. TPMS has experienced significant market uptake due to regulatory mandates that arose from acute safety issues. The regulatory push is expected to intensify with AD and will also affect technologies not previously seen as critical, such as run-flats.

By the end of our forecast period, low rolling resistance technologies will near 100% coverage of the tire market, and size, weight and intelligence factors will have much higher penetration to accommodate alternative powertrains. TPMS will likely be mandated on all vehicles and will evolve to offer greater durability, improved data capability and more harmonization among regional products. Run-flat tires will potentially be mandated by 2026 with related mandates likely requiring winter tires to have run-flat technology.

As a result of the environmental and supply reliability/price volatility that emerged in recent years, new materials are being researched, tested and to some degree already deployed. Alternative natural rubber sources, including guayule and dandelion as well as renewable synthetic rubber and renewable isoprene, are being introduced.

The main impetus behind this research has been to reduce reliance on natural rubber (which is produced in only a few strategic countries like Thailand whose agriculture has significant environmental impacts) and minimize the use of oil-based products like synthetic rubber and carbon black.

Scarce resources, price volatility and increasing performance requirements from OEMs (particularly on CO2 emissions) are also forcing tire manufacturers to reduce tire weight while maintaining performance. This should be an ongoing phenomenon in all segments of tire design, particularly if run-flat tires add weight elsewhere.

In summary, throughout the next eight years as autonomous driving becomes more commonplace, tires will be a critical component in providing real-time data for driving safety and will continue to transform to help vehicle makers meet fuel economy standards. They will include new materials and technologies that contribute to vehicle safety and preserve the environment.

This article originally appeared in Tire Review’s “State of the Industry” issue, contributed by Janine Young, an editor with Smithers Rapra.

The Disruptive Force in Tire Development