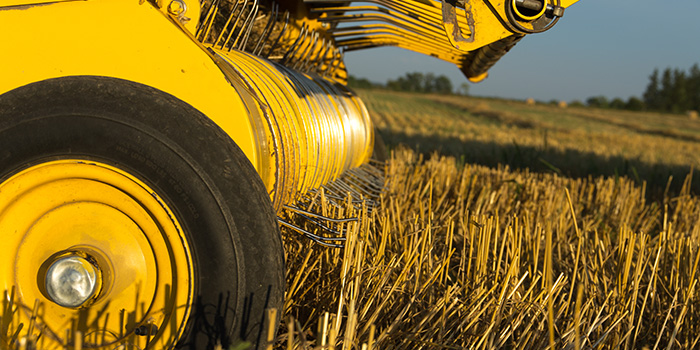 The first recorded attempt to use pneumatic farm tires was about 144 years ago in California’s San Joaquin Valley. The Thompson’s Rubber Tire Steamer was set up to pull seven plows and chug along at about 10 mph. It didn’t fare very well.

The second attempt wasn’t until 47 years later in 1918 when International Harvester Co. outfitted a tractor with solid rubber fronts and solid blocks molded to metal detachable lug rears. The rears were manufactured by the company bearing the name of its founder, Harvey Firestone.

Much has changed in the 44 years since rubberized tires began navigating fields across America’s heartland. Today’s generation of agricultural tires are highly engineered, complex components that are more capable, efficient, carry more weight, and leave less of an impact on the terrain than ever before. And this is just the beginning.

IF and VF Technology

In the early 2000s, Michelin invented what would later become widely known within the industry as increased flexion, or IF, tires. A few years later that technology evolved to create very high flexion, or VF, tires. While the IF and VF nomenclatures may not necessarily scream creativity, the technology was seriously groundbreaking.

Shortly thereafter, most of the major farm tire manufacturers joined suit and developed their own versions of IF and VF tires with flexible sidewalls that promised greater load carrying capacity and less soil compaction. And that’s been increasingly important in recent years due in no small part to equipment that’s increased dramatically in size, power, and, perhaps most importantly, weight.

Today’s generation of farm tires must carry dramatically more weight, stand strong in the fields against rubber and steel belt-piercing GMO crop stalks, and perform well on the roads at higher speeds for longer distances than ever before.

“Lower-pressure tires produce a larger tire footprint, which distributes the weight of the machine over the largest area possible to reduce compaction,” says James Crouch, farm segment marketing manager for Michelin. “In addition, a larger tire footprint provides excellent traction in the field, which can improve fuel economy by reducing slippage.”

Around 2009, the industry began to adopt a technology that had been in development for more than a decade by Titan, which also manufactures the Goodyear farm tire brand. Low sidewall or LSW technology was the first real technological evolution in farm tires since IF and VF technology. LSW was originally tested in the late 1990s and first implemented by Caterpillar in 2001.

Flexible IF and VF sidewalls offer some serious benefits in the field. However, this sidewall flexibility also creates some negative side effects especially on the road. Power hop is the bouncing effect a tractor sometimes experiences when pulling a high draw-bar load. Road lope is the swaying and bouncing of a machine during road transport that can result in rider discomfort and can decrease productivity between fields. Both are significant challenges facing farmers.

“With LSW technology, we increase the wheel diameter while keeping the tire the same outer diameter,” says Scott Sloan, agricultural product manager for Titan farm tires. “This reduces the height of the sidewall of the tire and dramatically improves the performance of whatever piece of equipment it’s installed on. It all but eliminates road lope and power hop on tractors.”

Despite the myriad benefits of IF and VF in the field, the technology is heavily reliant on the farmer to actively adjust air pressure based on the weight of the load, which can be a time-intensive process that reduces equipment productivity and costs farmers time and money.

“The success of IF and VF technology is totally reliant on the end-user to properly maintain inflation pressure of the tires for every application. Our surveys with end-users, tire dealers, and equipment dealers across the country indicate little if any attention is paid to the inflation pressure once the tire is on the machine,” says Sloan.

“Although the LSW is designed to run at 40% less inflation pressures, just like VF, due to the fact they are physically different than the conventional, the end-user will still enjoy the benefit of LSW technology unlike IF and VF.”

There are certainly some tangible benefits to LSW technology, even in comparison to IF and VF. But industry adoption has been relatively slow and driven almost entirely by OEMs due in no small part because Titan is the only company in the industry that currently produces both the tires and wheels.

Educating the tire and equipment dealers as well as end-users on new tire technology will become increasingly important. “One of the key factors is whether or not the farmer really knows how to utilize this technology to the fullest,” says Bruce Besancon, Alliance Tire Group’s vice president of marketing.

Meanwhile, equipment manufacturers, from Deere to Case and Holland, continued to build larger, most powerful and heavier equipment. This trend resulted in the tire manufacturers devoting more R&D resources to IF, VF, and LSW technologies.

“Work is going to be done in the three primary areas of tire design: structure of the tire, tread pattern, and compounding used in the tire,” Besancon says.

In addition to improving weight carrying capability, recent advances in crop sciences have resulted in genetically modified organism or GMO crops that are heartier and tougher than previous generations of plants. Tiremakers are working on new compounds that both improve stubble resistance and decrease the tendency for sidewall cracks to grow.

An Unintended Side Effect

While new farm tire technologies have been a welcomed and necessary evolution for the 144-year-old agricultural tire industry, there is perhaps a complex and increasingly expensive side effect. Driven by the OEMs, SKU proliferation in the farm tire segment has become a serious challenge. Much like the consumer tire segment, SKU proliferation is an expensive and cash-intensive challenge for dealers.

“Unfortunately, we as an industry have allowed a proliferation of sizes that really complicates the options for dealers and end users. With this complexity, it’s difficult for tire dealers to maintain inventory on unique sizes that may be on a handful of tractors in their area,” says Titan’s Sloan.

In addition to the ballooning number of SKUs a farm tire dealer must stock, accurately forecasting sizes and quantities several months in advance is increasingly difficult. That’s not to mention the tremendous cash drain on a tire dealer who is often required to make the investment up front before the product is even built.

That’s less of an issue today than in years past because credit is fairly loose and borrowing rates are low. However, that’s not likely to be the case in the future with the U.S. Federal Reserve hinting at rate increases later in 2015 and 2016.

Alliance Tire’s Besancon also points out that SKU proliferation is a challenge for manufacturers, as well. “More SKUs tie up the overall supply chain with small fabrication runs. We’re constantly reviewing offerings to see what can be eliminated in order to make it easier for the dealer and final customer to make a decision.”

According to Sloan, the best thing a dealer can do in response to SKU proliferation is to have a good working relationship with local equipment dealers to identify possible new sizes that are rolling in on the equipment.

Today’s generation of agricultural tires is more akin to the highly engineered equipment responsible for transferring immense power to the ground while treading lightly to decrease soil compaction. According to Michelin’s Crouch, “protecting the soil is one of the best investments farmers can make to improve their crop performance and their bottom lines.”

Gaining a genuine understanding of the real benefits behind acronyms like IF, VF, and LSW will become increasingly important as these technologies continue to advance and evolve. Improved education at the tire and equipment dealer level and with growers alike will be paramount for the continued adoption and implementation of this new technology and material compounding.

Tire dealers who work hard to earn their customers’ trust will be the ones who prevail.

The Evolution of Ag