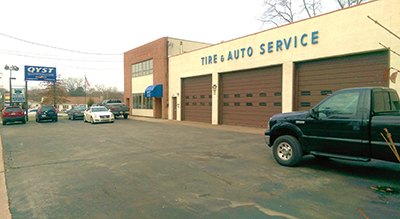 In 1977, John “Jack” Flick set out to build his own legacy in a two-bay Texaco gas and service station in Upper Darby, Pa. “I liked cars and I had some pretty good mechanical abilities,” he says.

“No one in my family had ever been in the business. My family was shocked when I said this is what I want to do.”

After several meetings with Texaco, and a generous loan from his parents, Flick, then 20 years old, started Qyst Tire and Automotive Repair.
“I borrowed $5,000 from my parents and I was scared to death because that’s all the money they had in the world,” he says.

Flick’s father and four brothers helped pump gas while his mother did the bookkeeping.

“I called her the little old lady with the green eyeshades on,” he says. “At that time, it was a lot of cash; credit and debit cards weren’t what they are today. It was pretty archaic by today’s standards.”

Flick started with one employee, changing tires and doing basic repair and automotive inspections. “We did no advertising when I started, I couldn’t afford it,” he says. “I wasn’t even in the Yellow Pages. My aunt printed some business cards for me as a gift.”

With his family’s support, Flick was able to focus on doing a good job, building a good reputation and making the right decisions for the business.
“It was hard in the beginning,” he says. “I had no credit. I paid back my father right away and the first time I tried to borrow some money to buy equipment, I pretty much got laughed right out of the bank.”

Slowly, he was able to turn the 16,000-gallon a month gas station into a 1.8 million gallon a year location.

“With the service station lease, you could never get more than three years,” he says. “There was a lot of pressure to produce more gallons. We pumped the gas for the oil company and the auto repair side was ours.”

After several years, Flick says the constant lease negotiation with the oil company wasn’t something he wanted to continue as he moved the business forward. “It was almost threatening, and I could see I was never going to get off that treadmill,” he says. “So it was time to branch out and actually buy real estate.”

He purchased a new location nearby and opened two additional shops over the years. Today, the humble business owner has nearly 40 years of experience under his belt but is quick to credit his family and his employees for his success.

“It’s been a really great ride and it’s been the people here,” he says. “I have really, really good guys.”

He has 17 employees among his three locations, including four who have been with the business for 30-plus years.

“That’s what really propelled the business and made it easy to open more stores,” he says. “I always believe you need the right guys first. When I knew I had the right people, that when I went and found new locations.”

In his decades of experience, Flick has learned to grow and change with the industry.

“It’s so much more brain than brawn now,” he says. “It’s very complex. There was no navigation system or entertainment system or backup cameras. There’s a lot of stuff that you’d never dream of when I was starting.”

From the diagnostics to TPMS to even motor oil, Flick says every aspect has become more advanced. Keeping up with it all is challenging for a small business owner.

“The BMW has a different adaptive strategy than a Cadillac so we have three different databases that we subscribe to for the technicians,” he says, and they are constantly going through new training and learning new software.

Getting the job done right the first time is the biggest thing Flick prides his business on.

“People are pressed today,” he says. “No one wakes up and says ‘I think I’m going to let my car break down today.’” To make things a little easier for customers with busy schedules, Flick provides “loaner cars” at each of his locations. The cars are free to use, he just asks customers to replace the gas they use.

“The loaner cars take the pressure off my technicians to hurry, and it takes the pressure and worry off the customer,” he says.

No matter what the job is, Flick says it’s important to be honest with the customer.

“We’ve told people not to fix their car,” he says. “We’ve said ‘look, it’s too expensive, you should really think about trading this in or trying to upgrade as best you can.’”

Flick adds that his employees work for salary and do not have any incentives to try and persuade a customer to purchase something that isn’t needed. “Their incentive is to get it done right the first time,” he says. “The technicians are really bright bunch of guys. They’re dedicated.”

Just taking a look at the recent business reviews online, one can tell that customer service is priority at Qyst Tire.

“You can’t take a day off of customer service,” Flick says. “My guys have the ability and authority to do whatever they think is necessary right at the counter. They don’t need to come and find me. They can discount, add movie tickets, whatever they need to do.”

About 70% of the business is automotive repair service, while tire sales make up 30%. Flick says the four most popular brands are Continental, General, Goodyear and Yokohama.

One of the most successful marketing tools has been piggybacking off the tire manufacturer’s promotions. “The last Goodyear promotion, you could get $200 back when you bought a set,” he explains. “They gave $160 and we put in $40 so it was like getting a tire for free.”

When it comes to competition, Flick says car dealers are the number one concern because of their access to proprietary factory information. While Right to Repair Act was supposedly resolved last year, Flick says gaining full access to certain car brands is still a challenge.

“There’s still a few cars that we can’t flash because we don’t have that info,” he says. “I hate to have to tell customers that they have to go to the dealer, especially when I know we’re competent enough and can do it, we just don’t have access to the info.”

He says big box stores may be competitive in price, but when it comes to service, he has them beat.

And he says it’s not uncommon to have a customer come in to have his technicians fix a job that someone else has messed up. “They’ll come rolling in here and they’ve got their four new tires but the light is on or lug nuts are stripped,” he says. “People are learning. Getting it right the first time is critical.”

Along with their customer service and exceptional work, the folks at Qyst Tire are dedicated to their community.

Every so often they’ll team up with the local clergy in town and repair a car for someone in the parish who has fallen on hard times. “We take the car and we fix everything in it,” Flick says. “We go over it from end to end, everything they need for the next two years, and we do it anonymously.”

Each year, employees also participate in the Walk for the Wounded, an annual event held to raise money for wounded troops. “This particular effort I’m most proud of, it’s a total effort by great people for great people,” Flick says.