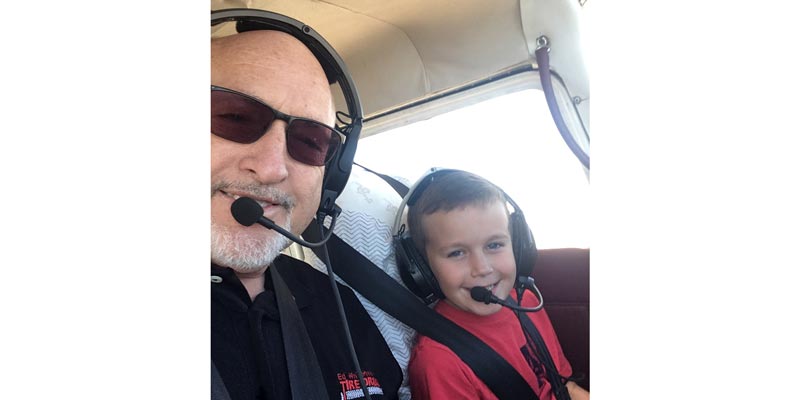 Ed Whitehead learned from an early age that a little grit and elbow grease are required for achieving his dreams.

Ed Whitehead learned from an early age that living and working in the American Southwest means grit and elbow grease tend to be required tools for tackling most tasks.

In the ’60s, he grew up in the tiny town of Stanfield, Arizona – where less than 1,000 people call home today – located 50 miles south of Phoenix. He spent his days with his father, who worked on the large Red River Land Co. cotton farm. That farm went on to become part of one of the largest cattle-feed lots in the state – 26 Bar Ranch – and was co-owned by the late John Wayne.

“On the farm in those days, you had to fix whatever was broken, including all the tires. That included small tires on pickups to the tires on the largest tractor and everything in between,” Ed says. “I watched my father and other mechanics work on all these different tires, and I always thought that it was pretty cool.”

At the same time, Ed saw how the sales and service side of the industry operated while working at his brother’s Texaco service station, where he sold gas, kerosene and a ton of tires to members of the nearby Indian reservation.

“We sold tires for everything you could imagine,” he says. “That’s the part I really enjoyed.”

Fast forward to 1998, when Ed and business partner Howard Fleischmann, current owner of Community Tire Pros, purchased their first tire dealership in Yuma, Arizona – now named Ed Whitehead’s Tire Pros  – following up with their second Yuma store in 1999. They went on to open their third store in Wellton, 30 miles east of Yuma, in 2003, and their final store opened in Casa Grande in 2005.

Although Casa Grande is 170 miles from Yuma – roughly the distance between New York City and Baltimore – that’s not a problem for Ed.

“We utilize an airplane for trips to Casa Grande, Phoenix and other cities we need to visit. I am an FAA-certified flight instructor. That’s another passion of mine,” he says. “We do deliver to Wellton and Casa Grande twice a week with specialty tires and supplies that we stock in Yuma.”

Each of those locations sells a combination of retail and commercial tires, and service trucks operate out of each store. For Ed, it’s important his stores offer as many farm-related products as possible, in addition to a complete offering of passenger and light truck tires as well as service. Each store also offers 24-hour roadside service and handles several different national account programs, government sales, OTR and industrial tires.

Ed says his secret to running a successful store comes down to listening to and working alongside his employees. He currently has 50 employees, including six who’ve been around since the beginning, his daughter, Shandy, and son, Tim. As a TIA instructor himself, Ed also recognizes the value retaining a well-trained staff.

“Training is very important in every aspect of our industry,” Ed says. “As the old saying goes, ‘What’s worse than training someone and having them leave? Not training them and having them stay!’”

Ed says while it’s his job to lay the groundwork for his team’s success, his stores’ true strength lies in the competence of his employees.

“Our teams do the extraordinary every day – sometimes in 110 degrees!” Ed says.

Advertisement
In this article:Proud to be an Independent Tire Dealer, Tire Pros