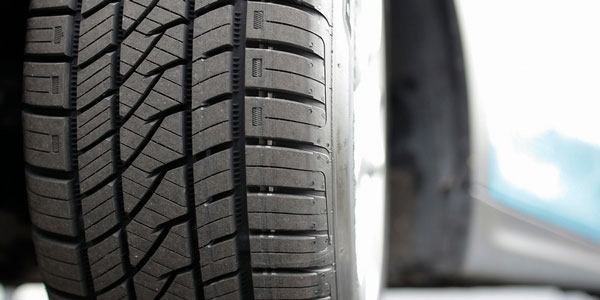 In Part 1 of this exclusive series, we walked you through some general information about tires: sidewall, inflation and little bit of load-carrying capacity.

According to DOT regulations, Tire Identification Numbers (TIN) must begin with the letters DOT, followed by eight to 13 characters. The DOT information often identifies the manufacturing location by a code, tire size code and type code, followed by the week and year the tire was manufactured. DOT also requires the date code information to be marked on an intended outboard sidewall (certain exceptions apply).

As Illustration 4 shows, the DOT code identified in this example is FDAPLJO4518. The first two letters, FD, identify where the tire was produced. The next two letters, AP, are known as the size code. The next three letters, LJO, are the type code and 4518 is the DOT date code of the tire. According to the DOT, the FD code assigned here is for the Yokohama factory in Japan. The AP letters identify the size and 4518 identifies that the tire was built in week 45 of 2018.

Highway tires, which are marked DOT, should pass all the requirements on the Federal Motor Vehicle Safety Standards (FMVSS) No. 139 laboratory testing for radial tires on light vehicles. This applies to all new pneumatic radial tires for use on motor vehicles (other than motorcycles and low-speed vehicles) that have a gross vehicle weight rating (GVWR) of 10,000 pounds or less and were manufactured after 1975.

The DOT and National Highway Traffic Safety Administration (NHTSA) developed the UTQG marking to provide consumers with information to make an informed decision during their tire purchase. All tires sold since 1979 are required to have a UTQG marking on the sidewall. UTQG markings are not required for deep-treaded light truck tires, winter tires, temporary spare tires, trailer tires and tires under 12-in. in diameter. Some other exceptions may exist. The UTQG marking consists of treadwear, traction and temperature indicators.

The treadwear marking demonstrates how long a tire can last. Treadwear has a range between 100 to 1,000. For example, an 800 UTQG tire will last twice as long as a 400 UTQG tire. Tire treadwear performance is evaluated on a government-sanctioned roadway course that’s approximately 400 miles in length, which is monitored by the NHTSA. The course is designed to produce treadwear rates that are generally representative of those encountered by tires on public roads.

Traction markings indicate how well a tire will perform in wet conditions. The traction rating can be AA, A, B or C (see Table 1). AA is highest level of wet traction and C is the lowest.

Tire traction performance is evaluated on skid pads with severity monitored by the NHTSA. Over the years, tire manufacturers have built their own tracks to test tire traction and send certain sizes to NHTSA to confirm traction gradings. The test pavements are asphalt and concrete surfaces, constructed in accordance with the specifications for pads. The skid trailer is pulled behind a truck at a speed of 40 mph over test surfaces. The tire’s coefficient of friction will be measured when the tire slides.

Temperature resistance indicates how a tire performs mainly in high-speed situations. The temperature ratings are A, B and C. Tires with a rating of A will be able to perform at speeds above 115 mph, while tires with a B rating are able to perform at speeds between 100-115 mph. Grade C tires can perform between 85-100 mph. Temperature resistance grading is performed in a laboratory where an inflated tire is tested against a high-speed drum.

Illustration 4 indicates the tire has one polyester, two steel belts and two nylon cap plies on the tread, plus two sidewall polyester plies in the sidewall area.

Safety should always come first. The tire sidewall always has information to protect tire installers, as well as consumers, against over-inflation, under-inflation and improper tire mounting. It also encourages consumers/installers to review the vehicle tire placard information and/or owner’s manual.

While the general tire-buying public may never fully grasp the incredible level of science built into each tire, knowledge is power, and it definitely should prove valuable to you when selling them.