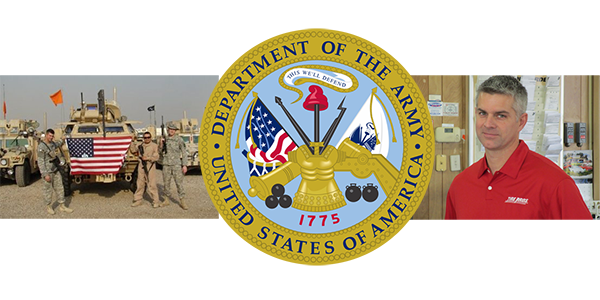 Brian Smith purchased Hillen Tire Pros in 2006. A year later he was deployed to Iraq for 18 months.

Brian Smith purchased Hillen Tire Pros in 2006. A year later he was deployed to Iraq for 18 months.

Running a business from halfway around the world is no easy task, but Smith credits his wife and employees for running things while he was away.

“Fortunately, I have some really good employees; I was able to track business after missions every now and then, and my wife really stepped up, grabbed the reigns and ran with it,” he shares.

The demands of being a Guard member while also running a business led to Smith’s decision to retire from the Army. He has plans to expand his business, but couldn’t while also serving in the Guard, he says. Both jobs are too demanding and it’s hard to run a business while absent.

Despite stepping back from his military career, Smith credits the Army for teaching him things that make him a better businessman today.

Smith was born into a military family. His great-grandfathers, grandfathers, brothers, and brother-in-laws all served, he says. He joined the Army in 1991.

Smith has been stationed all around the U.S., including Fort Jackson, S.C., Fort Belvoir, Va., Fort Dix, N.J., and Fort Drum in Jefferson County, N.Y. He also deployed to Iraq twice. Smith retired out of the 29th Military Police Company in the Maryland National Guard.

“I’ve worked with some of the finest men and women in the armed services, and that’s in every branch… You don’t just train with the Army – you train with the Marines, Coast Guard, Air Force, Navy –  so I’ve dealt with every branch, and there’s nothing like it. It’s a brotherhood that you know you can never experience unless you actually have done it.”

Smith says most people assume because of his automotive training he also works on vehicles for the Army. That’s not the case, however. Over his career, Smith had two different Military Occupation Specialties (MOS) or jobs –infantry and military police.

“None of my training is really automotive related. I went through squad training. I’ve done convoy missions and recon missions. I’ve done a lot of stuff that has absolutely nothing to do with the tire industry or automotive industry. Most people think, when they know I serve, is I’m working on trucks or something like that but I just don’t correct them.”

Smith’s career in the tire industry ran concurrent to his time in the military. He started at Hillen Tire Pros in 1991. Over the years he worked as a tire technician, changing oil and doing mechanical repairs. Today, he mostly focuses on managerial tasks.

“I never thought I’d work in the tire industry or automotive field. The former owners were great people and really took care of me so I stayed. I don’t regret it for a minute,” he shares.

Hillen Tire Pros is celebrating 100 years of operating in the greater Baltimore area this year. At one time the dealership operated 10 locations and Smith would like to restore the dealership’s larger footprint, opening more stores in the future, he says. Currently, Hillen Tire Pros operates out of Lutherville-Timonium.