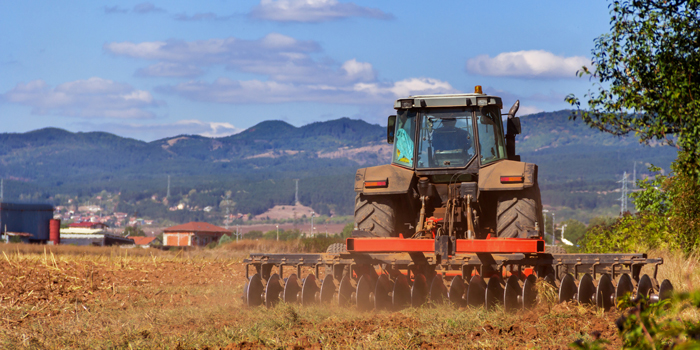 What is the American dream? There’s something about an election year that evokes such existential questions.
Is it an innate desire to lead a better life than our parents?

What’s our purpose? Maybe it’s just to be happy, but I think it goes deeper than that.

Since the beginning of recorded humanity, we’ve progressed and improved and evolved. We’ve formed tribes and communities. The industrial revolution took our ancestors out of the field and into the factory. Then the factories got bigger and more productive and we built incredible, beautiful things. We were the epitome of the industrial renaissance. By all accounts that matter, Detroit was the greatest manufacturing city in the world.

Meanwhile in the fields, a similar phenomenon occurred. The machinery got big. Then it got even bigger. Then it got massive and heavy, and then even heavier and faster.

In the world of technology, there’s a phenomenon called Moore’s Law that dictates precisely how technology will become more capable and, more importantly, less expensive every 18 months or so. This natural human inclination to improve and build extends well beyond tech powerhouses like IBM, Apple and Facebook.

Agriculture’s equivalent of IBM’s Watson artificial intelligence technology is the John Deere S690 combine. It clocks in at 45,746 pounds. To put that into perspective, a base model Ford F150 weighs just less than 5,000 pounds. In terms of gross vehicle weight, the S690 is the equivalent of just over nine F-150s. And that doesn’t include the head or other attachments. Heavy doesn’t begin to describe the John Deere S690 combine.

The iron has certainly changed and, as a result, the rubber has changed. But alas, we humans are limited by the laws of nature because soil simply hasn’t changed. Mother Nature is stubborn. And therein lies the challenge – because there’s a difference between what engineers know and what farm tire dealers do.

Somewhere in Akron (and in Belgium and Seoul), a woman in a lab coat is testing new polymers and compounds that will stand stronger in the field than the technology that came before it. At the same time, just outside of Des Moines, Iowa, a third-generation farmer guides his International Harvester through a few thousand acres of corn.

Pound for pound, those corn stalks are stronger than steel. Thanks to the polymer scientists in Akron, the farmers’ Firestone 900/60R32’s stand tall, maneuvering the big iron effortlessly through the rows. Getting the job done. Staying one step ahead of the brilliant crop geneticists at Monsanto in St. Louis or at Bayer in Germany.

The point is this: Today’s generation of farm tire technology must carry more weight, withstand more speed and deflect crop stalks that were genetically engineered to survive even nasty F4 tornadoes.

And still, the daunting challenge at hand is how to do all of that while treading lightly and minimizing soil compaction. Because, yes, soil compaction is a big deal.

There’s a battle raging right now beneath our boots. It’s an ancient tug of war that’s persisted for millennia: Man vs. Nature. We’re hungry to achieve the next feat of human ingenuity, and billions are hungry so if we don’t do it, who will feed them? Soil compaction is a very real challenge, but what lies behind every great challenge is a great opportunity.

If you don’t believe me, I can live with that. So let’s instead defer to the numbers. Will the truth not set us free? Perhaps the facts will.

According to Alliance Tire Group, soil compaction can lead to 14-70% losses in crop yield. But that’s a pretty big spread, right? Let us, for a moment, consider a conservative example. Our third-generation farmer just outside of Des Moines farms 2,000 acres of corn. Three seasons ago, his yield was 240 bushels per acre. Two seasons ago, his yield was 206 bushels per acre. Last year, yields fell to 177 bushels. Multiply the losses not by 10 or 20, but by 2,000 acres. Multiply our farmers’ yield losses by every farm in Iowa. Then every farm in the Midwest. Then every farm in our great nation. And by the way, that was a 14% loss in yield.

Still a skeptic? If you are, that’s OK.

Allow us to consider not lower outputs, but rather the inputs. Those pesky little costs required to mobilize a farm operation all of the sudden aren’t so little. Thanks to the entrepreneurial fracking operations in the Bakken of North Dakota and the Eagle Ford of Texas paired with a disorganized and misaligned oil cartel, we’ve been blessed with cheap energy. Nonetheless, fuel is a major expense for any farm operation.

One study found that compacted soil can result in 35% higher energy consumption during tilling, according to ATG. It’s not only more difficult and time-consuming to work compacted soil, but poor drainage can delay planting, further hampering crop yields.

A more recent study found that the impacts of soil compaction lasted for not one or two seasons, but up to 23 years. More than two decades.

Taking Responsibility for Your Realities

One of my personal goals is to read one book per week and I’ve been able to pull it off for the past two years. The single best book I read this year was written by a guy who goes by Jocko Willink. He was the SEAL Team Three commander when American and allied forces liberated Ramadi, Iraq; the same SEAL Team that American Sniper Chris Kyle protected with his over watch. This is the most decorated special operations unit in the Iraq War.

Jocko’s message is simple: Extreme ownership is accountability to the Nth degree and discipline will set us free. In other words, we are fully responsible for our own realities. And in this context, that means taking full ownership for understanding new product technology.

So here’s my challenge to all of us: Can we be better than average? We didn’t get here by being mediocre, did we?

I’ve been around the tire industry for all 29 years of my life – my dad made sure of that as I grew up in the Akron area. My first job was mounting tires until my hands bled. Quite literally. During the past six years, I’ve had the chance to meet with some of the most successful farm tire dealers in the country. Not a single one of them had a PhD in polymer science, but they all have a PhD in common sense and grit.

Because, yes, there’s a difference between what engineers know and what farm tire dealers do. Common sense will only get us so far. For instance, are VF (very high flexion) tires a little more expensive than traditional farm tires? You bet. Who has time to check inflation pressures anyways?

Consider for a moment the other side of the equation. There’s an old British saying that seems oddly fitting here: Penny-wise and pound-foolish. In other words, we’re faced with a serious challenge today. Is it really worth it to save a few bucks today on an inexpensive set of farm tires? That’s the path of least resistance, the path to mediocrity.

Led by human innovation, technology continues to leap forward. It’s ultimately up to us as farm tire professionals to take extreme ownership of understanding this new technology, having the right conversations, because it’s not us vs. them. We’re all in this thing together. We will, our kids will, and our grandkids will depend on this same soil to feed us for years and decades and centuries to come.

The rich American soil beneath our boots represents opportunity.  We’re in a unique position to lead the world toward a future of more sustainable agriculture.

Rest assured that the iron will continue to get bigger, faster and heavier. The crop scientists are already working on the next generation of disease and weather-resistant crops. The polymer scientists are already working on ultra-flexion technology. So it’s up to us to understand what it all means and to apply a little common sense to it all. If we refuse to take ownership of understanding compaction and technology, who will do it for us?