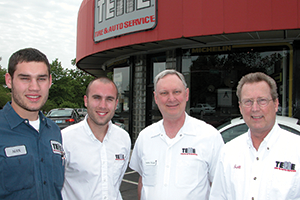 Established in 1942 in St. Louis, Telle Tire’s legacy began during World War II, when the nation was in short supply of many vital materials – including rubber and tires.

Arthur Telle and a business partner fixed up a secondhand retreading mold and began retreading tires. During the war years, retreading was a pretty good business. In 1946, they moved into a building in Richmond Heights, located just minutes from downtown St. Louis.

“Over the years the business adapted,” says fourth generation owner Aaron Telle. “By the time the 1960s came around, we started getting more into retail tires and service.”

Telle continues to run the family  tire and full service business, in the exact same location where his great-grandfather began nearly 70 years ago. He also owns a second location in neighboring Sunset Hills.

“We’re full service,” he says. “We do oil changes, safety and emissions checks, brakes, front-end work, shocks and struts, and we do a lot of engine diagnostic and engine repair. We even do transmission work. We don’t rebuild engines but we’ll replace them.”

The shop recently got a makeover, with the store completing a renovation project earlier this year.

“We re-did our offices and waiting rooms,” he says. “We added a coffee bar. We have fresh fruit out for the customers every day. We have cold bottled water for them. We have a water feature for our customers to enjoy, and work stations for them to use.”

They also offer a shuttle service and car loaner program for custo­mers who can’t wait.

Telle says the majority of custo­mers are busy working professionals, looking for quality work. “They want to be taken care of,” he explains. “They don’t want to have to come back. They want it done right the first time.”

Telle and his brother, Alex, grew up in the business and learned the importance of customer service from working alongside their father, Scott Telle and grandfather, Chuck Telle.
“My grandfather would always say, ‘a restaurant doesn’t sell a steak, they sell the sizzle that goes along with it,’” Telle explains. “One of the things that my grandfather ingrained into our culture was to build relationships, care for people, become friends and get to know customers.”

Telle says one of the highlights of working in the family business is getting to listen to stories about the past from customers.

“They’ll talk about coming in here and working with my grandfather or even my great-grandfather,” he says. “For me, that’s really satisfying and rewarding to hear those stories and it makes me want to continue the family tradition.”

Telle has big shoes to fill as both his father and grandfather were inducted into the Missouri Tire Dealers Hall of Fame. 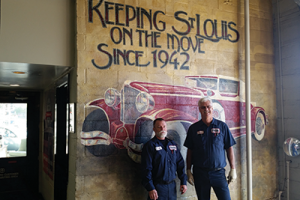 While the older gentlemen have passed away, Telle says he continues to use their business philosophies and isn’t afraid to build upon them.

For example, Telle says the Sunset Hills location was a new idea he brought to the business.

“I told my dad, I would rather try it and fail at a second location than wonder ‘what if’ when I look back 30 years from now,” he says. “It can be hard from a generational change to have someone young come in and say ‘why do we do it this way, this doesn’t make sense to me?”

Telle says his family was always supportive and open-minded when it came to new ideas. His dream became a reality when he opened the  Sunset Hills location in 2011.

Ahead of the Game

While business has been good, Telle says as a small independent tire dealer, he knows competition is fierce.

Car dealers are also on that list. During the recession, Telle says they saw a lot of customers who came in for service on older vehicles.

“In our area, people were not going out and buying new cars,” he says. “They were more likely to hold onto that Toyota Camry with 150,000 miles on it and fix it.”

However, now that the economy seems to be improving, people are feeling more stability and are more inclined to trade up.

Telle says that they try to stay ahead of the curve by having top-notch equipment and technicians on hand to service a variety of cars.

“For an independent guy to be able to work on a Nissan, Toyota, Ford and a BMW is not easy because it’s so expensive to have the right equipment to be able to work on those vehicles,” he says. “We’re constantly engaged in what are the new scan tools and what updates we can do. It’s almost a full time job just keeping up.”

He says the challenge is finding highly skilled technicians who understand the changes in technology and automotive advancements, such as hybrid and electric vehicles.
“For a small guy, that’s tough,” he says. “But you have to do it if you want to be considered a high quality shop.”

Telle says his goal is to continue building upon what his great-grandfather started decades ago.

“It’s definitely our plan and goal to expand,” he says. “I don’t see us getting 10-15 locations but I’d say four or five would be ideal for our company. We’re hoping our next location comes in 2016.”

In addition to running a successful business, Telle is also involved in the community.

He currently serves on the board of directors for a charity called “Joe’s Place,” which is a home for teenage boys who come from unstable living situations.

He is also involved in various civic events and is a major supporter of the local schools.

But he will always be involved in his family legacy, and hopes the next generation will take the same care with the Telle name when it’s their turn to lead.