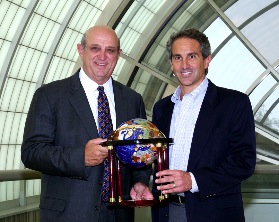 In 2010, Hercules Tire and Cooper Tire marked 50 years as partners in the tire business together. Both companies recently celebrated this significant milestone with Hercules dealers at the Hercules dealer incentive trip in Hawaii.

Cooper manufactures the Hercules brand, in addition to Cooper and other associate and private label brands. Together, both companies have been involved in the manufacture and distribution of millions of passenger and light truck tires to independent tire dealers across the United States and around the world, they said.

“Celebrating 50 years as business partners is truly an outstanding accomplishment,” said Roy Armes, chairman, president and CEO of Cooper Tire. “Our strong relationship with Hercules is one we value greatly. We appreciate a partner like Hercules who is committed to strong relationships and dedicated to growing the business the right way. Looking ahead, we are excited about the great things we can accomplish together.”

“Fifty years in business together serves as a testament to the great relationship that has been forged between our two companies and how our customers have supported the alliance for over half a century,” said Bill Trimarco, president and CEO of Hercules Tire.

Originating in 1952 from a group of northeastern U.S tire dealers and retreaders, the company was formally named Hercules Tire & Rubber Co. in 1960 when Cooper began manufacturing for them. Hercules is considered the first private brand tire buying group and today is owned by FdG Associates.

With history dating back to 1914, Cooper stands as one of only two U.S.-owned tire manufacturers. In 1960, the company became a publicly held corporation and was listed on the New York Stock Exchange – the same year Cooper and Hercules became business partners.