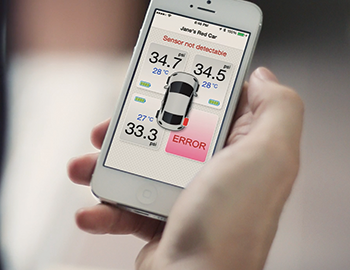 Seven years into the great experiment that is mandated TPMS, the data on underinflated tires is pretty clear.

An estimated 414 fatalities, 10,275 non-fatal injuries, and 78,392 crashes occurred annually in the U.S. due to flat tires or blowouts before tire pressure monitoring systems were installed in vehicles, according to government stats.

Data provided by Goodyear indicates that fuel efficiency is reduced by approximately 1% every 3 psi of underinflation.

Therefore, a tire that is underinflated by 25% would increase fuel consumption by approximately 2.3%. Based on that, properly inflated tires would translate into fuel savings of approximately $11 billion in the U.S.

After seven years of the TPMS mandate, it’s true that many (if not most) cars on the road were manufactured and sold with direct TPMS sensors inside the tires that communicate with an electronic unit inside the car.

But what about those passenger vehicles manufactured before 2007 that don’t have TPMS? What about drivers tired of dealing with the OE sensors inside their tires, or the sensor batteries have died and they need something to replace the old sensors?

What if you want to monitor inflation pressures and temperatures with more precision than that one yellow light on the dashboard, or monitor more than one car in a convenient way? You need something better, and that’s where new Bluetooth-driven technology comes into play.

FOBO, a Malaysian company that adopted the acronym For Our Better World (because FOBW would just be ridiculous), first came onto the electronics scene with FOBO Max, a Bluetooth tag to help users avoid losing important objects. Now FOBO has moved into tire pressure monitoring via Bluetooth.

Originally funded by an IndieGoGo crowd-funding campaign, FOBO Tire is an advanced aftermarket TPMS system that works by communicating with an Android or iOS smartphone via Bluetooth 4.0. FOBO Tire consists of four valve stem caps that screw onto the existing valve stems and monitor tire pressures constantly, even when the car is switched off. The sensors communicate with a smartphone via a downloadable app, as well as an in-car monitoring unit. The sensors and the in-car unit both come with easily replaceable batteries that last up to two years under normal use.

The FOBO Tire sensors can be in-stalled in less than five minutes, and sensor learn and relearn procedures are accomplished by holding a smartphone near the sensor and following the on-screen instructions. No modifications or tire removal is needed.
The downloadable smartphone app allows a user to receive tire pressure data from up to 30 meters away, 24/7, with a three-level alert system that warns the user if pressures drop below preset levels, rise above preset levels, or if temperatures become dangerously high. The app has the ability to monitor up to 20 cars for large fleet applications, and also allows for sharing of data with up to 100 other users.

As a theft deterrent, FOBO Tire sensors are locked to the owner’s cloud account and cannot be reused. It seems the designers originally thought that this would be sufficient to keep people from stealing the sensors, not realizing that potential pilferers either might not know that the sensors aren’t reusable, or might just think they look cool enough to not care. So now the sensors come packaged with optional locking nuts and two special wrenches – small enough to fit on a key chain – for removing the locks.

The sensors are designed for pressures up to 50 psi and temperatures between -40˚F to 185˚F. The sensors are water, salt and dust resistant and are FCC certified. The app is compatible with Android 4.3 and iOS 7.1 and above. The sensors also come in your choice of black or silver. While the caps are relatively large, they weigh only 10 grams apiece and do not affect rotational weight or tire balance. The FOBO Tire set retails for about $150.

A second round of funding via IndieGoGo also produced FOBO Bike, an all Bluetooth tire pressure monitoring system for motorcycles and bicycles with a maximum pressure up to 87 psi. Appropriately enough, FOBO Bike only includes two valve stem sensors, and no separate monitoring unit. FOBO Bike will be available in March 2015.

FOBO is not the only player in the Bluetooth TPMS game. There is also the GoSafe TPMS 500BT by Papago. That company is known for its commitment to auto safety equipment such as its innovative P3 dashcam and other products. GoSafe TPMS is much the same concept as the FOBO Tire setup – four locking valve stem caps with replaceable batteries that communicate with an Android or iOS smartphone app via Bluetooth. Instead of a separate in-car monitor, the GoSafe sensors rely entirely on your smartphone, and require an in-car receiver/transmitter that plugs into a cigarette lighter port in the car.

The GoSafe TPMS is more expensive than FOBO, retailing for $200 to $250, but the makers claim better precision from the sensors (+/- 1 psi) and the smartphone app has more flexibility in terms of pressure and temperature alarm settings. The internal receiver/transmitter may provide better Bluetooth coverage inside the car, where FOBO Tire has sometimes been seen to have a spotty connection if the smartphone is in a pocket.

Either product, however, provides a brand-new approach to TPMS monitoring, one that is much more advanced, flexible and easier to use and maintain than many OE systems. The next generation of TPMS is now arriving – and fast.

How this type of TPMS system meets NHTSA regulation requirements is unknown; the federal government requires a working TPMS system in 2007 and newer passenger vehicles, but it does not specify the mechanics of such systems. Whether such products from firms not experienced with creating robust vehicle systems would be deemed acceptable is a matter for an after-work debate.

What is obvious, though, is different technologies are now being applied to solve common problems. Indirect and direct (sensor-based) TPMS systems were considered the only mechanical solutions to this regulatory problem. And over the last seven-plus years, they created a huge marketplace for sensors, learn/relearn tools, training programs, etc. – not to mention a million headaches, corrosion and battery problems and more.

The door appears open for a new technology solution. Will Bluetooth – or any such technology – provide new answers? Who know, the market will dictate the result. But smart tire dealers need to keep their eyes and ears open and stay ahead of another tech evolution.