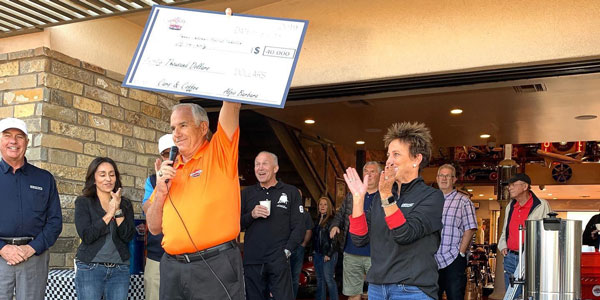 Alpio Barbara, owner of Redwood General Tire and winner of Tire Review‘s 2019 Top Shop competition, sponsored by Coats, presented a check for $40,000 to the Phoenix Children’s Hospital Foundation/Golf-Fore-Charity this month.

The donation started with a simple $2 tip for free coffee that was collected at Barbara’s event venue in Scottsdale, Arizona, called. Alpio’s at Troon. The venue hosts a monthly event called Cars for Coffee, which invites car enthusiasts to the venue to not only show off their vehicles but also check out Alpio’s collection of vintage vehicles and memorabilia.

According to the Scottsdale Progress Newspaper, the donation was started after a gentleman left the tip at a June 2017 Cars for Coffee event. Barbara took the tip and put it into a tip jar for the hospital foundation.

Additional donations were later raised by the North Scottsdale Coffee Group and others, which included Barbara’s $7,777 donation. This year, Golf-Fore-Charity matched any donations collected up to $2,000, which helped add up to the $40,000 that was collected.

Earlier this month, Barbara and Sue Pille of Platinum Companies, which provided the free coffee at the event, presented the check to the hospital foundation.