Leave it to the OEMs to take a simple system like heating and air conditioning and turn it into an electronic jumble of wiring, sensors and computer components. HVAC units have come a long way from when I started in the business. A pressure switch was about all you needed back then; it’s not that simple these days. 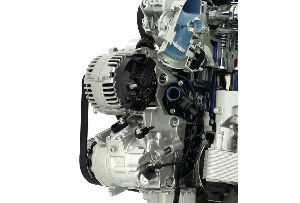 It’s essential to have a solid foundation of knowledge on the basic operation of HVAC system operation before delving into a problem on one of today’s systems. Training is essential and even required to handle refrigerants. And, it’s a lot less expensive than a single comeback, a contaminated machine or a damaged part that can’t be returned. (Tech training in the proper service and repair of mobile A/C systems is the mission of the Mobile Air Conditioning Society (MACS) Worldwide. For more information, log on to www.macsw.org.)

Diagnose and Verify
Diagnostic procedures vary from car to car and from year to year. I’m finding that it’s easier to diagnose the HVAC systems with a scanner rather than with a wiring diagram and test light.

Consider a blend door that mixes air from the different cores and intakes. In a late-model import vehicle, this door can have an infinite number of positions and is constantly adjusted depending on what the driver wants. In the past, this was nothing more than a cable connecting the door to the control head. A scanner can tell you the position of the door, even before you tear apart the dash.

Some of the basic scanners can provide a wealth of information on HVAC systems. Before purchasing one, ask if it covers HVAC systems and for which makes.

Most late-model import vehicles have a variety of sensors to regulate interior temperatures. Today, a system can have more than 10 sensors that can measure solar loads, interior/exterior temperatures and the positions’ various flaps and doors. Many of these components are “smart” with computers and drivers built into the component.

I wouldn’t drag out that test light and start stabbing the wires. They may look like a sensor, and they may have wires like sensors, but there’s a good possibility that it’s not a positive or negative signal at the sensor. In some cases, the sensor may be reading a digital-type signal (waveform voltage) that would be easier to read on a scanner screen instead of a 12-volt test light. These values are then sent to the body control module to be interpreted and used to determine the actual A/C clutch engagement, door positions or fan speed. There again, a scanner is the best tool of choice.

The advantage of using a scanner to see certain sensor values and door positions is that it also provides one extra quality-assurance step in the diagnostic process. Codes for the HVAC system can be the most valuable information for you as the tech. However, a code is not the answer, but rather a starting point or a direction for diagnosis and maybe a repair.

So many times, I see vehicles come in with new parts bolted in because the last place that had it read a code and assumed that meant to replace the part. Oftentimes, it comes down to how the component interacts with the entire system.

Warning: Replacing an HVAC component is not the end of some repairs. Many European and Asian imports require the component and system be put through a “relearn” procedure with a scan tool or series of button presses on the control head to calibrate the new component. This is especially true with door motors that need to set the values of the position sensors. Also, some control heads may need to be re-flashed to operate properly.

The HVAC system has always been a part of the total vehicle. How the A/C system functions is governed by the status of the vehicle, even from the early days of the first wide-open-throttle switch on some “computer command control” vehicles in the 1970s that shut the compressor off. Modern vehicles take it to the next level.

The head unit in the dash is not where most of the decisions are made for a vehicle. Instead, information is shared along a data bus with the engine and body computers so the interior conditions and vehicle performance are maximized for efficiency and comfort.

Checking into it a little further, I found the real culprit to be the charging system. At idle, the alternator couldn’t develop enough output to maintain all the systems in the car. The PCM would shut down the A/C, trying to maintain a voltage level that was acceptable, but never got to the point of causing the charge indicator to come on during this whole process.

The best advice I can share about diagnosing HVAC systems is to consider the year and make of the car, find out whether or not a scanner code is available, read the values for the pressure sensors, and see if there is any information on the condition of the components before you start changing components. If you can’t get access by way of a scanner, then I would suggest a good wiring diagram and a description page that will inform you of how each of the components works in that given system. The more information you have before pulling parts, the better you’re diagnostic results will be.

The pace of progress is always moving fast. Recently, a 2010 Jaguar XF was brought into the shop after collision repairs. To my amazement, the A/C system is designed to purge the ducts of hot air before the system has the opportunity to blow hot air in the occupant’s face during initial operation. This operation is performed as the control module uses the door ­motors and vents in the dash. It’s a synchronized dance that will be coming to more vehicles, so be prepared to understand how it works and how to fix it.

With the variety of systems out there with divided driver and passenger controls, cabin filters, sun load sensors and now even new refrigerants, there is no doubt that you will have to keep your cool while diagnosing these systems.


Scott “Gonzo” Weaver is the owner of Superior Auto Electric in Tulsa, Okla. and has owned the shop for 27 years. He was given his trademark nickname “Gonzo” while serving in the USMC. He is the author of the book “Hey Look! I Found the Loose Nut”, that can be purchased online at Amazon.com or at www.gonzostoolbox.com.