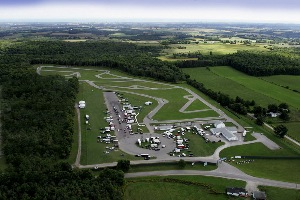 With the sun beating down and heat from nearby engines surrounding me, I thought to myself, “They definitely don’t prepare you for this in journalism school.”

There I was, fully clad in a Nomex racing suit – plus shoes, Nomex socks, racing gloves, a helmet and a balaclava – squeezed into the cockpit of a 2008 Van Diemen Formula SCCA car. As with most assignments for Tire Review, attending a media day at the Bridge­stone Racing Academy in Pontypool, Ont., was a new experience.

The academy dates back to 1991, when former racecar driver Brett Goodman purchased cars and equipment from the former Spenard-David Racing School and created Goodman Motorsports. A year later, Bridgestone/
Firestone Canada Inc. signed a title sponsorship agreement with Goodman, officially creating the Bridgestone Racing Academy. The tiremaker has since renewed its sponsorship through 2019.

The academy welcomes a wide variety of guests: each year, about 1,500 participants – CEOs, soccer moms, teenagers, grandfathers and tire dealers – attend sessions at the school.

The school offers 18 different courses, from a half-day session to a three-day race license school. It also hosts four- and eight-month “motorsport immersion” programs for participants from all over the globe.

Like all programs at the academy, ours began with a classroom session in which chief instructor Jamie Fitzmaur­ice went over the long list of safety and driving basics. 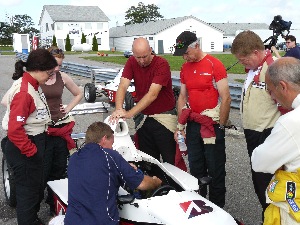 While revving the engine to warm things up before my first driving session, I quickly reviewed everything: how to brake and accelerate to maximize the grip of the tires – in this case, Bridgestone Potenza RE-11s. Which turns are sharper than others. How to use the sequential shifter to keep the engine’s RPMs within the desired range. There was a lot to keep in mind, and as I glided out of the pit area, I just hoped it would all make sense once we got going.

The racing academy’s track, which has 24 different configurations that feature a multitude of varying corner-straight combinations, was designed to be challenging, yet safe, for both beginners and accomplished racers – a fact that likely has contributed to the school’s 25-year injury-free record. The lack of walls and guard rails, as well as the inclusion of wide run-off areas and superb sight lines, made it easy to quickly gain the confidence I needed to test the limits of the car and tires.

After a couple laps, I was ready to kick things up a notch and take advantage of the car’s power. The single-seat, open-wheeled Van Diemens are equipped with 2.3 liter, 170 hp engines and five-speed gearboxes and can accelerate from 0 to 60 mph in just over four seconds. What was more impressive – and what really enabled me to take quick, but controlled, turns – was the racing performance friction carbon metallic brake pads on all four wheels, which can take the cars from 60 to 0 mph in under three seconds.

The Potenza RE-11s kept me on the track and in control the entire time. And while I’m sure I could have pushed the envelope a little more, by the end of the day the six-point racing harness felt natural and I was pleased – and impressed – with the performance of the Van Diemens and the tires.

“It’s an opportunity for us not only to showcase a product, but to see how it performs under extreme conditions,” said Jeremy Smith, manager of brand public relations for Bridgestone Amer­icas. “Consumers don’t get to drive street tires in this type of environment. It’s a great opportunity to see how well they perform under such stress.”

Steering the Course at the Bridgestone Racing Academy