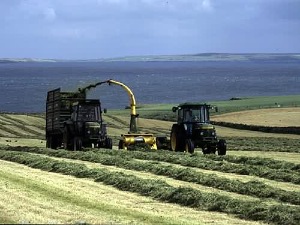 By most measures, 2008 was a banner, record-setting year for the North American agricultural community, even considering the sudden, sharp economic decline that started in October 2008.

2009, though, is much different. After posting an all-time record of $87 billion in 2008, net farm income is projected to fall 34.5% to $57 billion for the year, according to an August report by the U.S. Agricultural Department – $6.5 billion below the average of $63.6 billion in net farm income earned in the previous 10 years.

While that sounds bad, it is far from dust-bowl bad; the net farm income forecast for 2009 is still the eighth largest in history, and because input costs – feed, equipment, services, etc. – were also down, net farm incomes are expected to at least remain level with 2008 results.

But as anyone who has been attached to the roller-coaster ride that is the North American agricultural market will tell you, just wait because things will change – and quickly. No one, mind you, is waving a warning flag, but crop and livestock prices remain depressed, which means farmers have tightened the purse strings. That has, in turn, put pressure on tire and equipment makers.

The ag tire market experts at Bridgestone Americas, Trelleborg and Alliance Tire have all seen tightening, to varying degrees and in different ways, but the outlook through 2010 and 2011 appears positive.

“Domestically, ag tire demand has remained fairly strong, both through equipment and tire purchases,” Tom Rogers, ag tire marketing director for Bridgestone Americas, said regarding the economy. “Tire dealers are managing their inventories tighter but end users are still making the purchases as they need tires. The greater impact has been felt on the export side as credit issues from the global economic crisis appears to have slowed equipment sales significantly and affected our tire sales, as well.”

James Tuschner, marketing director for Alliance Tire USA, sees things slightly differently. “Independent dealer demand for ag tires has decreased,” he said. “Part of the decrease can be attributed to the economic downturn. Another part of the decrease was more indirect – when OE business is going strong, tires are scarce for the dealers, resulting in pent-up demand. When equipment sales slacked off, the tires that had previously gone to OE were diverted to the independent dealer. As a result, the marketplace for replacement sales to the independent dealer softened and manufacturers’ sales and marketing have taken a more aggressive stance.

“Regardless, the ag market continues to show its resiliency, and still has underlying strength, despite the economic issues at hand,” he said.

“From our standpoint, the ag tire market – both OE and replacement – has been very positive for us the first six months of 2009,” said Jeff Jankowski, North American sales director for Trelleborg. “We started to see some softening in our ag sales beginning in July, which carried into the last quarter of this year. We have also been closely monitoring our inventory levels and turns along with our receivables portfolio to insure we are generating positive cash flow during this downturn.”

Tuschner and the others are pretty optimistic about the short-term outlook, too. “We’re enthusiastic and positive about the 2010-2015 timeframe,” he said. “We’ve seen a bounce in commodity prices, and we know this is all part of a cycle, and inputs are down from last year’s highs. Farmers will keep farming, and as we recover from the economic downturn and get back on track to an increasing standard of living worldwide, international demand for grains, meat, dairy products, fiber and fuel will continue to strengthen.

“Even if the recovery takes a little more time than we expect to gain traction, demand for replacement tires will be strong as farmers keep older equipment running until they can make the jump to newer machinery,” he said.

“When I look out 5-10 years, I feel there are still many positives in the agricultural economy,” said Bridgestone’s Rodgers. “At a macro level, the global population continues to grow at an increasing rate; agriculture production will have to increase greatly over the next 20-30 years to meet the resulting increased global food demand. The U.S. agriculture industry is poised to provide that needed food production. On top of that, bio-fuels will have a long-term positive effect on our industry, as the United States relieves some of its dependency on foreign oil.”

Rodgers also points to new farm equipment technologies and their impact on the tire market. “As equipment becomes larger and more specialized (to meet growing global demand), tires are being asked to not only carry heavier loads but help improve traction and reduce compaction.”

Any discussion of ag tire technology must begin and end with the slow growth of radials in the North American ag market.

“Based on future projects that will be rolled out by the OEMs in 2010-12, we believe the ag market in North America will continue to radialize based on the demand from the market,” said Trelleborg’s Jankowski.

“I don’t think the economic situation has specifically impacted radialization,” said Rodgers. “That process was already well underway before the global economic crisis began. Most new production ag equipment already is sold with on radial tires.  Producers are recognizing the improved efficiency of radial tires and moving that way more and more every day. Today’s economic conditions probably just magnify the benefit of radials even more.”

“There will always be a market for bias out there for chore tractors and certain specific uses – and we’re geared up to continue serving that market even as we continue introducing high-performance radials – but we see a growing awareness among farmers of the return on investment that radials deliver,” said Alliance’s Tuschner. “ROI is important no matter what the economic climate is. In fact, it’s in many cases even more important in a downturn.”

So if radialization is pretty much taking care of itself, what are U.S. and Canadian farm customers looking for today?

“Our dealers are continuing to ask for our high-technology tires – the radials, super-high-volume sizes and flotation tires – that deliver better fuel economy, higher performance and lower soil compaction,” said Alliance’s Tuschner. “Farmers are becoming more aware of the impact that tires can have on performance, and they’re looking for a greater return on their tire investment.  Our dealers are working hard to deliver those options.”

“Dealers want a product offering that includes the necessary production ag sizes, both radial and bias, as well as economically priced bias lines for small tractors and implements,” said Rodgers of Bridgestone.

The best opportunities for dealers to grow in the ag market today really lie in delivering the very best service and selection.

“It is a great time for a dealer to invest in training and education so his employees are even better prepared when the market returns,” said Rodgers. “Focusing on service and support of the end user is the best way to add value to a customer relationship and be able to maintain that business.”

Tuschner concurs. “We believe dealers will benefit from focusing on selling tires that deliver value to farmers – return on investment that comes from improving the performance of their equipment. They need to help farmers connect with the tire technology that will allow them to wring extra horsepower, extra torque, load-carrying capacity, speed and fuel efficiency from their equipment.

“Now is a great time to show how integral tires are to equipment performance,” he said. “The technology is there, and every dollar, bushel of yield, pound of compaction and mile per hour of speed counts.

In addition, Jankowski feels dealers are well served  by managing their inventory levels, working closely with customers to control receivables, and making sure their service levels “are second to none” in their market.

“Dealers need to continue to market, promote and advertise their name, services, products, programs and people,” he said. “That is the best way to maintain their share of the market, and growth can come with existing customers by focusing on products these accounts are not currently purchasing from them.”

“Farmers and OEMs are constantly on the lookout for higher load-speed indexes, wider contact patches and better performance,” he said. “Crop producers are much more aware than ever of the damage that soil compaction can cause to their crops, so they are seeking wider contact patches to lighten their footprint.

“Livestock producers and custom spreaders of manure and commercial fertilizers need to go farther and faster than ever to stay profitable,” he continued.

“From a manufacturing angle, optimizing production technology is vital to maintaining an aggressive price point in a tight market, and delivering our tire technology at a price where we can offer greater value and return on investment.”

Just like consumers, he noted, farmers demand performance, and they want their tire dollars to go farther than ever.

And dealers will play a large role in making sure that happens.